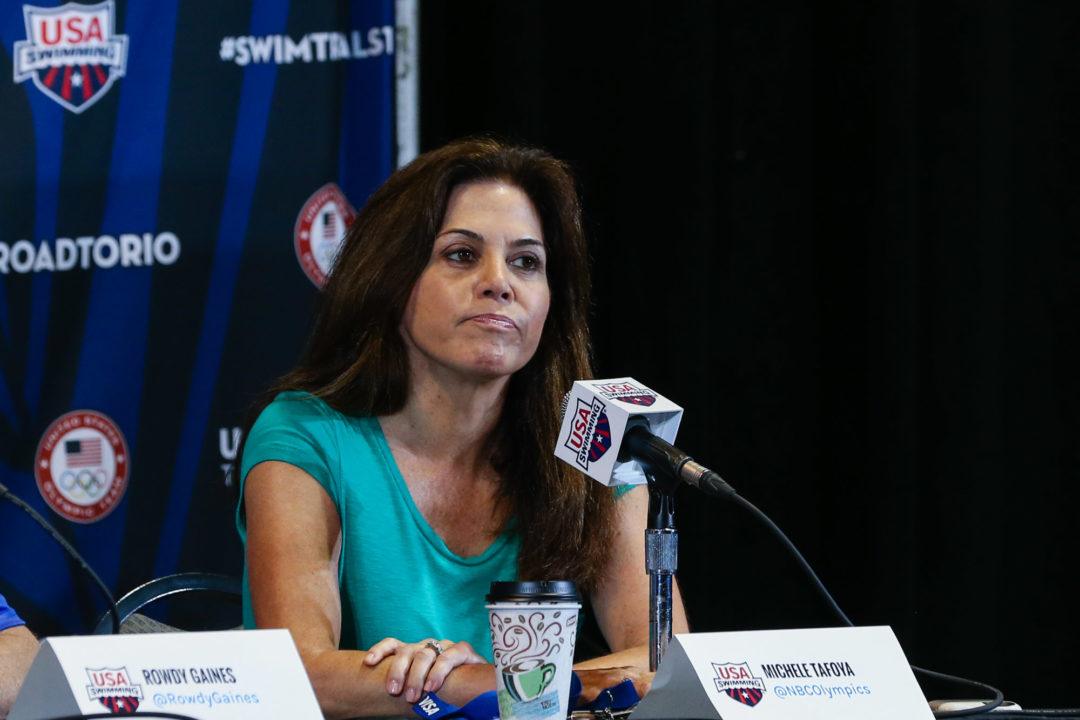 Michele Tafoya, who handled the poolside interviews for NBC during the 2016 U.S. Olympic Trials and scheduled to do so again... Archive photo via Tim Binning/TheSwimPictures.com

Michele Tafoya, who handled the poolside interviews for NBC during the 2016 U.S. Olympic Trials and scheduled to do so again for the Olympic Games, has shut down her Twitter account on Sunday after a heated debate with fellow television personality Franchesca Ramsey.

Tafoya, who has shifted gears from her usual role as an NBC football sideline reporter, exchanged Tweets with several users on Twitter on Sunday morning, including Ramsey who is both a writer for the Nightly Show with Larry Wilmore on Comedy Central and the host of the show Decoded on MTV.

While Tafoya’s Tweets have been deleted along with her deactivated/closed account, the conflict appears to have been launched in the aftermath this morning’s killing of 3 police officers in Baton Rouge, Louisiana, and specifically with regard to so-called “white allies” during Dr. Martin Luther King Jr’s movement for racial equality in the 1950s. Tafoya Tweeted out a photo of Dr. King marching alongside white protesters, and after receiving a response from Ramsey, the conversations spiraled beyond the initial picture with Tafoya accusing Ramsey of being angry and Ramsey accusing Tafoya of being condescending.

Portions of Tafoya’s contribution to the interaction were still available through various archives. At one point, Ramsey Tweeted:

sis. acknowledging that white people opposed MLK does not erase the existance of white allies during the civil rights movement @michele_tafoya

To which Tafoya responded:

I would respectfully ask, then, that you clarify that. Your original tweet suggests otherwise.

Before signing off, Tafoya sent multiple Tweets expressing her frustration with social media, including:

Sadly, respectful conversations are rare on Twitter. Sadly, things will get misconstrued. Sadly, this makes people want to stop talking.

I hope that people will continue to try to reach out to others. I’m going to keep trying. No one ever said healing would be easy.

Other users joined Ramsey in disagreeing with Tafoya via Twitter, including one Tweeter going by the moniker “Mr. D” who said of Tafoya that “it’s like she’s in denial of the white resistance,” referencing the assassination of Dr. King by a white man. Tafoya said that those accusations left her “astonished.”

We have reached out to NBC for comment on the matter and to see whether or not Tafoya can be expected back on Twitter in the run-up to the Olympic Games. The opening ceremonies are fewer than 19 days away. We have not yet received a response from NBC, but will update our readers if we do.

Horrible as it is to recount the recent American personal violence and concern about safety in Orlando, Wisconsin, Ohio, Dallas, Louisiana and beyond, lets get a little perspective here.

Driving down the road is a much more reliable source of mayhem than any of the attitudes and outbursts that get press from agenda driven media. In 2011 there were 32,479 traffic fatalities in the US, which was the lowest number since 1949, 62 years earlier.

Does it deserve an article? A fight on Twitter?
The day when these “social networks” which have nothing of social will produce quiet debates and smart reflections has not happened.
About the content, nothing new. USA has always been one of the most violent countries in the world where racism and injustice have always been present. It’s just easier to see some examples today with Internet. But nothing new. Add a hateful and racist presidential campaign from the clown and there’s no surprise to see such things happen. It’s intolerable to see police blunders as it is intolerable to see police officers’ killings.
But you should always wonder who benefits from crime? In all nations the violence… Read more »

Maybe a swim site isn’t the place to open up that can of worms, but I’ll bite…

Your PM is quoted in the New York Times:

“The times have changed and France is going to have to live with terrorism.”

To me, that sounds like acceptance of a future fraught with acceptable and increased violence and the waving of a flag of defeat in the face of horrific evil. Innocent people being murdered and leadership accepting of it will most definitely promote more violence.

In an ideal world there would be peace. There are good people here in the United States who stand united in fellowship with your country. We are a country with people across every spectrum of… Read more »

It sounds like you read a few Guardian articles about the US and are just regurgitating the simplistic narrative you’ve built up in your head. This post is full of slogans and cliches. I find your commentary patronizing, reductive, sophomoric and even offensive. Please stick to swimming.

yup… let the US be like France … high unemployment and high taxes… ugh… stick to swimming and stay out of politics!

Baldtimer. We are like France. The US constitution and our form of democracy is based upon French democracy. Hell, the French gave us the statue of Liberty! If you ever float down the Seine, there’s the original Statue of Liberty sitting on a bridge piling. High unemployment and high taxes–sounds like the Reagan years.

1
-1
Reply
Other way around
Reply to  David Berkoff

Sure some of enlightenment writers hat influenced Jefferson and Co. were French. But the French Revolution came after the American one and channeled its success to inspire.

I can’t believe that a media professional working for national media got baited that easily by angry internet troll.

Typical Swimsam comments. Anytime anything to do with race comes up, or, *gasp!*, a post celebrating women of color, you have these typical knee-jerk, unreconstructed, reactionary commenters. Almost as bad but not completely as terribly embarrassing as the defensive crap responses to the Swimswam article celebrating Simone, Lia and Natalie. Read a book, please. Pay attention to our world and the histories that created it. Watch Ramsey’s show Decoded online. Folks around here will learn quite a bit. Sigh.

A few years ago Time Life published for the first time the photos of the murder scene not long after.. How to say – but it was very ordinary . The usual 1950s 2 storey motel in a slightly down at heel area with a man casually sweeping up the blood on the balcony.
The photographer noted that he expected a lot of commotion & even danger in the vicinity but it was very calm .

Life before Twitter .Maybe we should have BT & AT before & After .

She works in national media and can’t spell “existence”?

“…Tafoya accusing Ramsey of being angry…”

Please tell me she simply posted, “u mad?”

This world has gone insane,sadly it’ll only get worse!!

It’s always been insane. We’re just reminded of it more constantly nowadays as the news cycle infiltrates our phones and the reach of social media continues to increase.

I disagree. Statistically we are in the largest peacetime era. What we tend to hearin the media is news about violence, strife, polarization, killings, and the generally terrible. This’s what sells newspapers and TV advertising. If you are told that the world is coming than end by the news media you tend to start believing it and are addicted to tuning in to more news.

As to the seeming inability of people to communicate respectfully today, here’s my take. Email, Twitter, Facebook etc tend to allow people to say things they might not otherwise say to a person face to face. The filter of courtesy comes off when you don’t have to look someone in the eye and see… Read more »

Agreed about the peacetime stuff. The world’s pretty safe, at least as it compares to pretty much every other time that people have been alive.

The problem is people that allow a few freak incidents dictate how they live. You’re not gonna get blown up by anyone, just as you’re equally unlikely to get shot by a renegade cop or an evil minority. (That doesn’t mean we shouldn’t take steps to correct any of these things, though, these steps just need to be on an appropriate level. Two unending wars in far off countries are not the answer to one problem, just as cop murders aren’t the answer to another.)

Just gotta live your life as best you can.

With respect, I think you must’ve spent too much time underwater in the blastoff. It depends on what you call “peacetime.” I think you’re construing peace with absence of world wars involving conventional military action. There are more conflict zones, leading to more fear, poverty, famine, disease, abuse, and refugees in the world than at any other time in our history. In fact, we’re far more in the realm of a world (that is, global) war (given the number of conflict zones involved and the ease at which war can be transported and brought to your doorstep) than during the historical WWI and WWII.

You have absolutely no connection with reality. Put up some factual sources to prove your point – I’d love to see it because they don’t exist.

You’re displaying a view point exactly as David describes it – influenced by the focus of social media.

very good reminder . I dont think even Americans are safe in their own country . Why ? just check how many people have guns and how many guns were sold on Us Soil since 1945 – and u can have a serious headache to begin with . Those simple raw facts tells me u are not in a safe country …specially if u have on top of it the ” Patriot Act ” and the biggest army on the planet . Just check it out … i feel way safer in Europe …why ? we dont have a GUN culture .

You and swim doc just proved my point. You base your opinions upon the trend in news reports. Statistics don’t lie. There are fewer wars, less violent deaths, greater wealth and technology, less disease and famine than the past 70 years. With 7 billion people and areas of instability you will always have issues that spill over borders but we are a lot safer than we have been as a species in a long time.

Please show me the statistics.