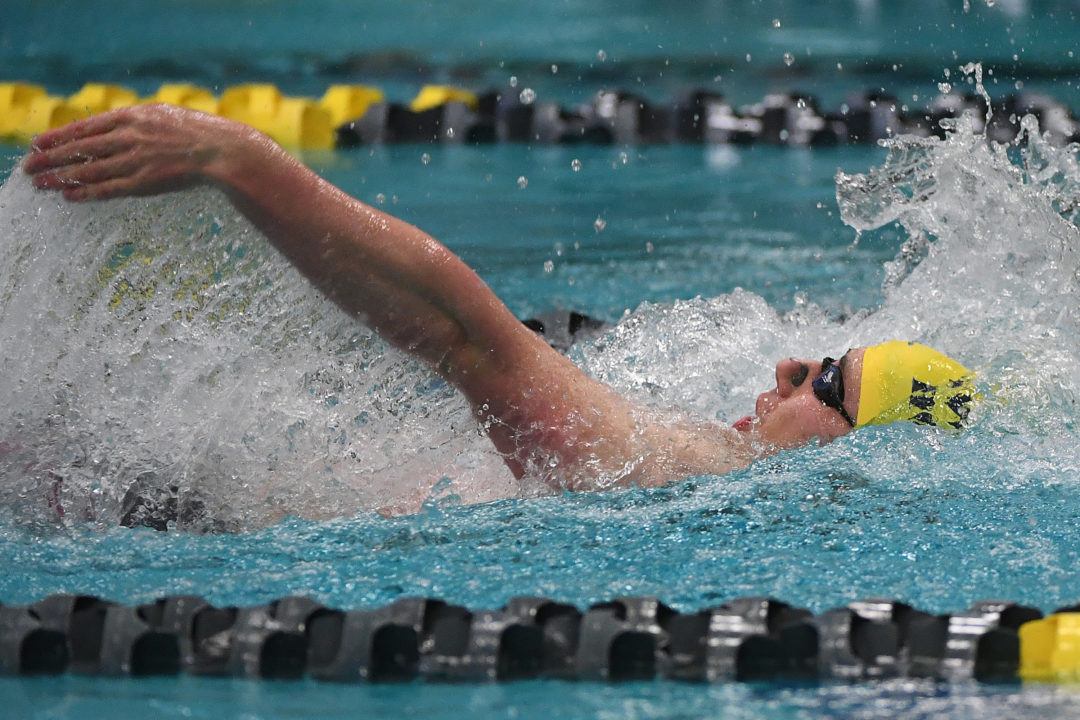 On Friday, the Navy men and women swept the UMBC Retrievers at Lejeune Hall in Annapolis. The Navy women won 15 of 16 events while the Navy men won 12 events.

The women’s 500 free featured a face-off between UMBC’s Moro and Navy’s Thomas. The two ladies were dead even during the front half of the race. Moro then began to fall off Thomas’ pace in the second half. However, Moro then came back on the last 50 in an effort to out-touch Thomas. In the end, it was Thomas who took her second victory of the meet with a time of 4:57.16. Moro finished in second with a time of 4:57.77.

The Navy women then exhibitioned the last 3 events to seal their victory over UMBC with a final score of 185-107.

In the men’s meet, the first 2 events had very close races with heavy effort from the UMBC Retrievers.

The next close race was between Navy’s Luke Johnson and UMBC’s Kai Wisner in the 1000 free. Johnson and Wisner took turns leading throughout the 40-lap race. It wasn’t until the finish at the wall that Navy’s Johnson took the win with a time of 9:23.23. Wisner took second at 9:23.50. Johnson also had a second victory in the 500 free (4:35.56).

After the medley relay, UMBC’s Russian sprinter Rattsev came back in the 200 free to almost even split his race and win with a time of 1:40.32. Navy’s Ryan Waters was out-touched and settled for second with 1:40.58.

The Navy men exhibitioned their 400 free relay to also seal their victory over UMBC 198-100.

I see results like this and I wonder why Navy (and Army for that matter) isn’t in the ACC. Yes, I understand that the service academies aren’t for everyone but at this point, Navy has 45 swimmers and divers on full rides on their men’s side and 41 on the women’s side so no financial barrier for their recruiting. Being at the academies is tough, no doubt, and not like being a student/athlete anywhere else because you have the academic rigors and the athletic requirements but also the military requirements on top of that. I understand it is harder but the type of people there are supposedly capable of handling all three sides of life there. It just seems that… Read more »