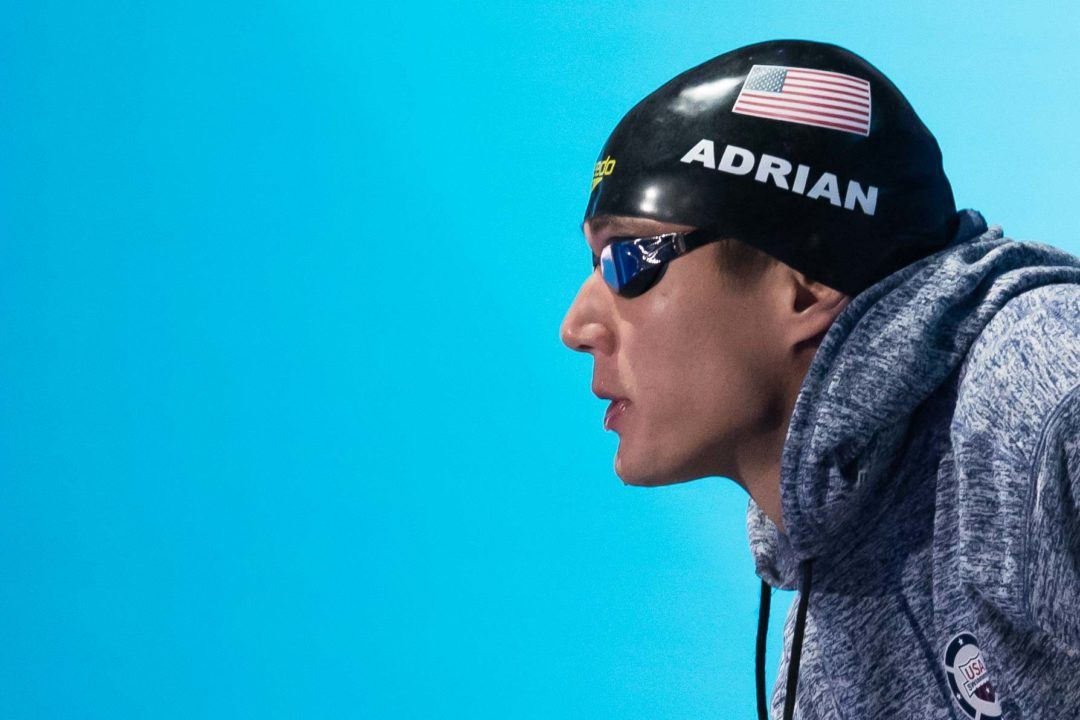 Adrian's time from 2014 Masters Spring Nationals may not register in USA Swimming's Data Hub, yet it stands as the 22nd-fastest performance of all time in the 100 yard freestyle. Current photo via Mike Lewis/Ola Vista Photography

Olympic Champion Nathan Adrian focuses primarily on competing in the long course 50-meter pool. Though Adrian has made appearances on the World Cup over the years, and has represented Team USA at the short course meters Dual in the Pool, as well as the short course version of the FINA World Championships, his appearances in the yards pool have come fewer and fewer over the years since he graduated from college at Cal Berkeley in 2011 and left behind the fury of the NCAA. Though Adrian may still practice a lot of yards with his teammates at Cal, he rarely competes in that venue. But rarely does not mean never.

Though it may seem funny or even “unfair,” Nathan Adrian, among all his other accolades, is a US Masters Swimming National Record Holder. While not all of Adrian’s USMS National Records were posted in Masters competitions, he did make an appearance at the 2014 USMS Spring Nationals in Irvine where he posted a ridiculous 41.13 to win the 100 freestyle and set what is probably an untouchable Masters record for the men’s 25-29 age group.

Adrian’s time from 2014 Masters Spring Nationals may not register in USA Swimming’s Data Hub, yet it stands as the 22nd-fastest performance of all time in the 100 yard freestyle. Adrian has twice been faster, with a 41.10 from the 2011 NCAA DI Championships, and his best time of 41.08 from the 2009 NCAA DI Championships. Other all-time top performers include Caeleb Dressel, the fastest performer ever in the 100 yard freestyle, who holds the NCAA, American, and U.S. Open Records at 39.90, Vlad Morozov, Cesar Cielo, and Michael Chadwick, all of whom have cracked 41-seconds, as well as Ryan Held, and Tate Jackson who have been 41.05 and 41.06, respectively.

According to USMS.org, Adrian is not a current member of US Masters Swimming.

I would love to see more elites make the switch to USMS as their time at the top of the USA-S rankings draws to a close. Darian Townsend is one of the big names who’s made that switch, regularly competing at the Arizona Masters champs, USMS Nationals, and other big meets. While us mere mortals will never have the opportunity to take down any records they set, I’ve loved every chance I’ve had to race in the same event as the big name swimmers at USMS Nationals. I’ve had the opportunity over the past 7 years to see a number of the Olympians show up at USMS Spring Nationals, including Cullen Jones, Matt Grevers, Anthony Ervin, Clark Burckle, Jason Lezak,… Read more »

Edit: The 2014 USMS Spring Nationals were not in Irvine; they were in Santa Clara. Small nit to pick, it was thrilling though to watch Nathan’s 100 free that year, timing system issues be damned!!

Nathan swam in two USMS Spring Nationals that were held in 2014 in Santa Clara and 2017 in Riverside. Some of the USMS Records are challenging that even Nathan Adrian would agree on. For instance the 50 Free USMS Long Course National Record for the 30-34 age-group is 21.55 and that would be a challenge to see if he could break that record. Its always great to have swimmers such Nathan in our meets because when he is finished with professional swimming, he can always swim in USMS with friends for fitness, friendship, and competition. We have another Cal swimmer from the past that everyone looks forward to see swim and that is Matt Biondi.

Being a masters swimmer provides a unique athletic experience for non-elite swimmers to compete with and against world-class, elite-level swimmers, such as Adrian. As an Arizona masters swimmer, I’ve been fortunate enough to race against both Darian Townsend and Roland Schoeman at local masters meets (although it wasn’t much of a contest obviously). Both swimmers are two of the nicest, most gracious, humble individuals I have ever met. There are few, if any, other sports in which amateurs get such an opportunity to compete/play with the professionals and elites. I welcome Nathan Adrian as a masters swimmer and hope he continues to compete at masters competitions.