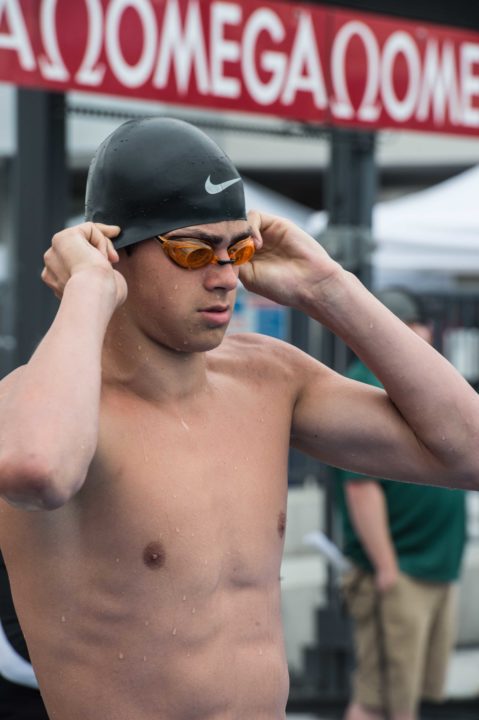 The NASA Showcase Classic has kicked off in Clearwater, Florida, with some of the fastest age groupers in USA Swimming slated to compete. Archive photo via Mike Lewis/Ola Vista Photography

The NASA Showcase Classic has kicked off in Clearwater, Florida, with some of the fastest age groupers in USA Swimming slated to compete.

The opening prelims session was a busy one for Vinny Marciano, Michael Andrew and Katie Mack, each of whom took the top seed in multiple races Wednesday morning.

Marciano ruled the 11-12 age bracket on day 1. Best known as a backstroker, Marciano is the clear-cut favorite to win the 200 back tonight after pacing prelims in 1:59.38. That’s well off his lifetime-best, and was probably a cruise swim to save energy for his second event.

That strategy paid off, as Marciano went a lifetime-best in the 50 free, putting up a 22.62 for the runaway top seed. That pulls him to within eight tenths of Michael Andrew’s National Age Group record for 11-12s.

The 14-year-old Andrew broke a National Age Group record himself in the 200 back, swimming in his last meet in the 13-14 age bracket. You can read more about that record here, but Andrew went 1:44.02 and leads the field by a long-shot heading into tonight.

Andrew also showed off his sprinting ability. He took the top seed in the boys 50 breaststroke, going 24.99 to lead the field by two seconds. Then in the next event for his age bracket, Andrew went 19.93 to lead the 50 free, still about two tenths off his NAG record in the event.

Also notable in that 50 free was top 13-year-old qualifier William Myhre out of St. Charles in Illinois. Myhre went 22.08 and could threaten the 22-second barrier at finals.

Nation’s Capital 12-year-old Katie Mack was also on fire in prelims, taking a pair of top seeds and appearing to have more in the tank for finals. Mack went 2:04.19 to win prelims of the 11-12 200 backstroke – she leads by 4 seconds and is still 5 off of her lifetime-best.

Mack also took top billing in the 11-12 50 free, going 24.63. She’ll have to keep an eye out tonight for second seed Christina Cianciolo, a hometown kid out of Clearwater. Cianciolo went 24.96, the only other swimmer under 25 this morning.

In the 13-14 girls category, it was swimmers on the younger end of the age bracket who dominated. Rabea Pfaff out of Delaware Swim Team dropped over a full second in her 50 breaststroke to put up not only the top 13-year-old time, but the top time in the entire 13-14 age group at 30.52.

Kaitlyn Barth accomplished the same feat for Southwest Aquatics in the 50 free – the 13-year-old cut eight tenths to go 24.28, and sits atop the 13-14 division heading into finals.

Live results should be here, but don’t appear to be working. The meet is also available on the Meet Mobile app under “2014 NASA Showcase Classic.”

You can watch finals starting at 5:00 p.m. Eastern….
http://floridaswimnetwork.com/2014/04/15/watch-live-nasas-dolfin-showcase-classic/

Interesting names at this meet.
Of course Michael Andrew but also Vinny Marciano and Katie Mack who can all break some NAG records this week.
Carson Foster has broken a few butterfly NAG records in LCM in the past 2 years.
Chase Travis is also a young girl to watch.

Wow! I can’t believe Michael went a 1:41 200 fly also! That would’ve A Finaled at NCAAS!!! This kid appears to be unstoppable.