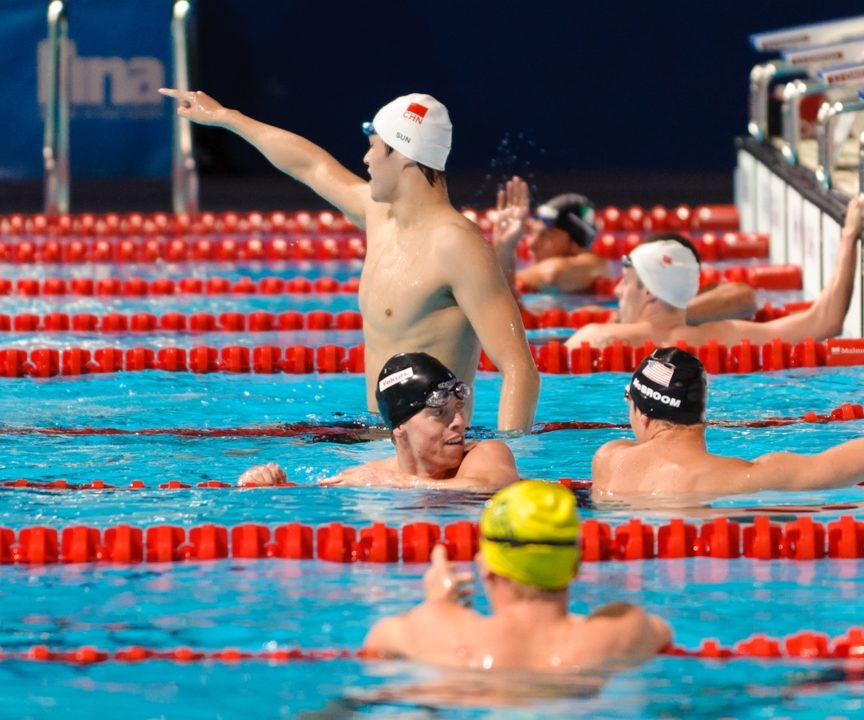 World champion Sun Yang will compete at the Chinese National Championships in May, which will be the first time he has raced since being suspended from competing in November... Current photo via Victor Puig

World champion Sun Yang will compete at the Chinese National Championships in May, which will be the first time he has raced since being suspended from training and racing by the Zhejiang College of Sports in November.

Following up his double gold medal performance at the Olympics Sun had a tremendous World Championships winning the 400, 800 and 1500 freestyle in Barcelona. Just three months after bringing glory to his country once again Sun found himself in a tad bit of trouble when police discovered he was driving without a license.

Police discovered that Sun did not have his license after he was involved in an accident where a bus brushed against his Porsche. The Chinese government showing no favouritism to the national sporting hero gave him the maximum penalty, a fine of 2000 yuan and detained the athlete for 15 days. That was not the only punishment that he was given. After the incident the Zhejiang College of Sports suspended from the following:

1: Sun is banned from attending any domestic or international meets.

2: He must halt any promotion or sponsorship events.

3: His salary has been suspended.

The college’s penalty may have been more severe because it was not the first incident where the college had punished the swimmer in the calendar year. He was fined a month’s allowance and suspended from commercial activity in February of 2013 after a public argument with his longtime coach Zhu Zhigen as well as violating other team rules, which were not disclosed.

Sun returned to training in December and as reported on http://www.ecns.cn he will compete at the Chinese National Championships in May. The world champion will compete in the 200, 400 and 1500 freestyle as well as the 4 x 200 freestyle relay at the meet which runs from May 12th-17th.

“It will be his first formal race since returning from the ban and a lot of people are concerned at his status,” Xu Qi told the Qingdao local media.

“His training is progressing after recovering from surgery on his left big toe. We are not sure about his racing form yet but we believe he will bring us surprises at the Asian Games.”

Sun under went foot surgery in January, a procedure that was performed to treat an infected ingrown toenail. In March Sun posted pictures of his training progress, which appeared to mainly consist of dryland training, on his Instagram account.

That’s a ridiculous punishment for such a small mistake….

Driving without a licence is not a small mistake, it can easily endanger people’s lives if you drive a car without knowing how to do that properly, just get that licence already…

But why in the world would the swimming federation suspend him after the severe civil penalty is beyond me.

Sun should just immigrate to Australia.

He should come to Club Wolverine

Na go to SWIMMAC! They need a distance swimmer.