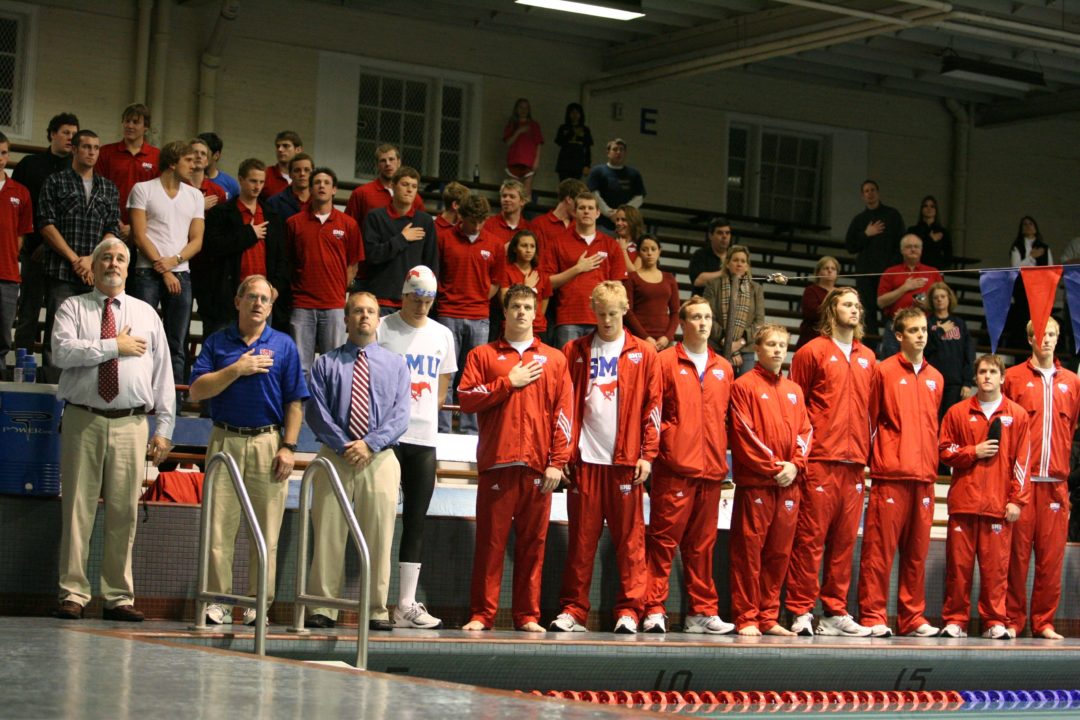 The SMU men's swimming & diving team is set to travel to Austin, Texas to compete in the Texas Invitational. This is first time since the 2008-09 season that the Mustangs will compete in this event. Current photo via SMU

The SMU men’s swimming & diving team is set to travel to Austin, Texas to compete in the Texas Invitational. This is first time since the 2008-09 season that the Mustangs will compete in this event.

Looking Ahead:
Following the Texas Invitational, the SMU divers will compete Dec. 17-22 at the U.S. Diving Nationals in Austin, Texas and Jan. 3-5, at the Georgia Diving Invitational in Athens, Ga., to end 2013 and begin 2014. Following the divers trip to Athens, the Mustangs get their full team back together to compete in a dual meet at LSU on Jan. 9 at 7 p.m.

In addition to Burnett, Bryce Klein placed seventh in the 1-meter dive  (310.8) and ninth (322.8) in the 3-meter dive as he competed in the first two events of his collegiate career. Junior Hayden Hodges placed fifth in the platform dive with a score of 295.8.

Mustangs in The American Ranks:
SMU has five swimmers and five relay teams ranked in the top 5 of the American Athletic Conference.

The Ponies rank third in two relays including the 800-yard freestyle relay (Matthew Colket, Roney, Andriunaitis, Wells) with a time of 6:49.69 and the 200-yard medley relay (Braeden Newton, Tyler Rauth, Fletcher and Melo) as that group clocked a time of 1:31.34.

2013 Outlook:
The SMU men’s swimming and diving team has a new league for 2013-14 but the goal is the same. The Mustangs are aiming for their 17th conference championship in the last 18 years. SMU returns two All-Americans, nine All-Conference USA selections and 23 letterwinners as it seeks to claim the first American Athletic Conference Championship this winter. The Mustangs will be led by senior captain Nicolai Hansen. Hansen is one of nine seniors. who head coach Eddie Sinnott says is a “strong group of individuals”, noting that there is a senior in every event except diving.