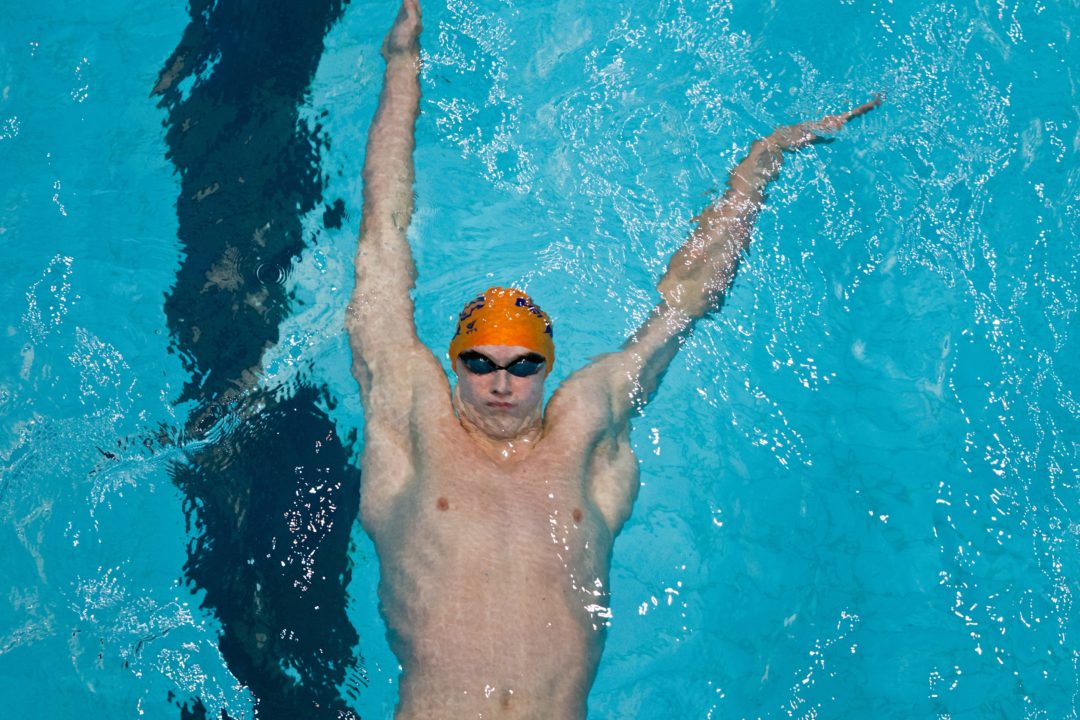 Day 2 of the 2012 Gator Swim Club Summer Invite, a low-key affair in Gainesville, Florida, saw a battle of...

Day 2 of the 2012 Gator Swim Club Summer Invite, a low-key affair in Gainesville, Florida, saw a battle of the present versus the future, as Bolles swimmer Ryan Murphy, just 16, showed off against one of America’s best in Ryan Lochte.

The pair matched up in the session-opening 100 backstroke, with Lochte having the top seed coming out of prelims.

It took coming within a fingernail of a best time and National Age Group Record, but Murphy pulled off the upset in 54.98, with Lochte coming in 2nd in 55.30. That’s just behind his NAG Record of 54.96.

For the younger Ryan, this is a gigantic confidence boost headed toward trials three weeks from now. Based on this swim, he should crush his NAG Record at the Olympic Trials – he won’t age up until the final day of the meet, which is after the 100 backstroke. As for Lochte, in a meet where he’s really focusing on speed races we still haven’t seen much of it. It has to be a bit unnerving for him to go into the Olympic Trials straight off of heavy training seemingly without one test of progress for his rest/taper, but he’s shown that he knows how to get the job done when it counts.

Former NCAA Champion Ben Hesen was 3rd in 56.27, and Conor Dwyer was 4th in 57.05 – that’s actually a best time for him. This is the weakest leg of his IM, but this shows a definite improvement.

T2’s Katie Hoff looks in good shape headed toward trials, as she won the 200 IM in 2:13.37. That put her ahead of Elizabeth Beisel in 2:16.38. That doesn’t seem like a great time for someone who’s about to go a 4:32 in her 400 IM in three weeks, but she was a 2:15.9 a month out of last year’s World Championships. She doesn’t swim this race all that often in long course, though, so we don’t really have much of a measuring stick.

Florida Gator Sarah Bateman is developing quite-a-knack for finishing under pressure – she won the women’s 50 free on Monday in 25.91, just .02 ahead of T2’s Erika Erndl, who has about a decade more experience.

IX3’s Charlie Houchin continued to be among the stars of this meet by winning the men’s 400 free in 3:50.49, a time that keeps him right in the thick of a big group contending for the number-two spot in the men’s 400 free. But behind him in 2nd, the same can’t be said for Peter Vanderkaay, who was 2nd in 3:59.90. The whole Gator middle-distance group struggled in this race, with Sebastien Rousseau taking 4th in 4:02.79 and Nicholas Caldwell in 5th in 4:03.33.

It’s one thing to write the times off to Gregg Troy’s heavy training, but Vanderkaay has more than once had trouble getting psyched up for these local meets. He’s put up 3:58’s and 4:00’s at these local meets in the past in the last few years since moving to Gainesville.

Here are results from the first two days, courtesy of the Florida Swim Network. Results are also available on the Meet Mobile app on your smart phone.

murphy reminds me a lot of piersol a decade or so ago when he made the olympic team at a young age. i think he is a serious contender.

I think it’s always amazing to see people swim fast before the taper meet – in this case trials. Truthfully, I don’t get how they do it. But I’m not so sure that having impressive races 3 weeks before trials begins is necessarily a good thing – long term (tho it might be). And – in that same vein – i don’t think that Lochte or Biesel not being world-class fast 3 weeks out in an endurance means anything negative about Omaha. Watching people go fast in a Grand Prix is fun, and get’s us excited. I’m just not so sure what kind of predictor it is. And as a coach, I admit that I would be nervous about being… Read more »

He is only 16.
Young swimmers can swim as fast without taper.

I wasn’t talking about Murphy. I was talking just generally about all the fast swimming we’ve seen over the last weekend or 2.

This kids going to be something special someday!! Very nice