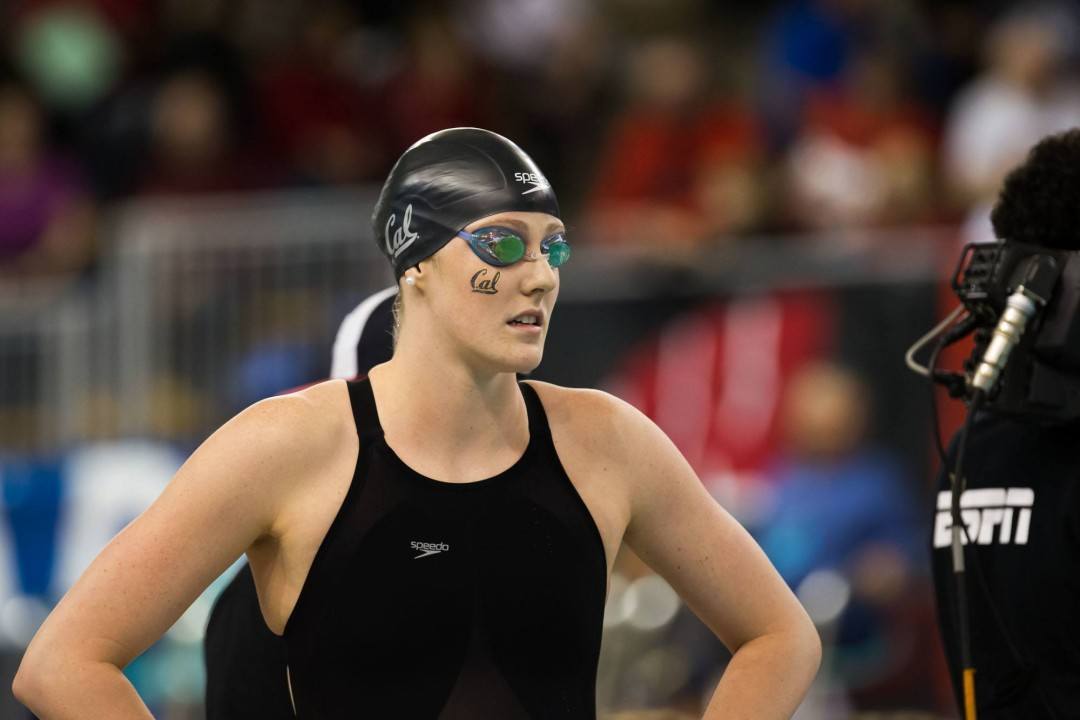 Former Cal Golden Bear Missy Franklin has earned the ESPY Award as the top Female NCAA Athlete of the Year. That honor pairs with the Honda Sports Award she won in June that gives the same title.

The ESPY awards are given out annually by the largest American sports television network, ESPN, in honor of the best of the prior year in sports.

Franklin came home from her second, and final, NCAA Championship meet in March with 5 NCAA titles, including all three of her individual events. The highlight among those swims was a 1:39.10 in the 200 yard freestyle, which made her the first woman to get under the 1:40 barrier.

This award is another first for Franklin – she’s the first swimmer to ever win Female College Athlete of the Year. This specific honor has been handed out 13 times, with the winners being 10 basketball players and 3 softball players.

Female swimmers have, however, won the overall Athlete of the Year before – Amy van Dyken took the honor in 1997.

This is Franklin’s 2nd ESPY. In 2013, after her 2012 Olympic conquest, Franklin won Best Female Olympian. She was also nominated for Best Female Athlete that year, but not college athlete as she was still in high school at the time.

Franklin won the award over a field of five:

Franklin was not in attendance to accept the award, as she stayed home in Colorado to train just a few weeks out from departure for the 2015 World Championships in Kazan, Russia.

Congrats Missy.
Happy to see she was not in LA to receive her award and has stayed in Colorado to work her backstroke starts and underwaters.

Yo Bobo! There is no place she’d have wanted to be than in L.A. getting her award…take it from Missy herself, in a selfie video. Her car broke down. So please stop spreading misinformation.

wherever she is, she will find a way to train

why are u so serious about this ? Missy does what she wants ….
AS BOBO stated , she better work her starts and underwaters to be seriously competitive next month on backstroke .

Why so hard on Bobo? The article above says “Franklin was not in attendance to accept the award, as she stayed home in Colorado to train just a few weeks out from departure for the 2015 World Championships in Kazan, Russia.”

In the selfie video you linked, Missy herself said she was in Denver watching her car get towed. Not in LA.

So it would appear Bobo and the article are right, and Missy’s car breakdown and the award looks a timing coincidence. So no lies being spread.

In any case, I’m not sure it’s a big deal. Missy has to be one of the all time greatest ambassadors of our sport. Nobody represents it better. Congratulations Missy… Read more »

Gosh folks, not sure I get the down arrows.

Missy tweeted at 9:15 in the evening the night of the ESPY’s that she was in Denver. She says it in her video Missy may have wished she were in Los Angeles at that moment, but for training reasons she never planned to be in Los Angeles. Not a thing wrong with that at all.

Help this poor lost swimmer understand why a re-statement of the facts deserves down arrows. Do you have any facts that contradict this? Or do you think that somehow it reflects badly on Missy because she wasn’t at the ESPY’s — Because it doesn’t. Read the tweet and watch the video contained in it again. Be… Read more »

Meh. I deserved that down arrow. The last link I posted was to the wrong article.

I thought Cal was supposed to fix that, right?

Wonder what the voting breakdown was for that. She’s SO much more well-known than the rest of the nominees, wouldn’t be surprised if she got like, 90% or something crazy.

Pretty sure Missy’s gonna graduate, too.

I’m sure the rest of the nominees are lovely athletes, too, but they ain’t Missy Franklin.