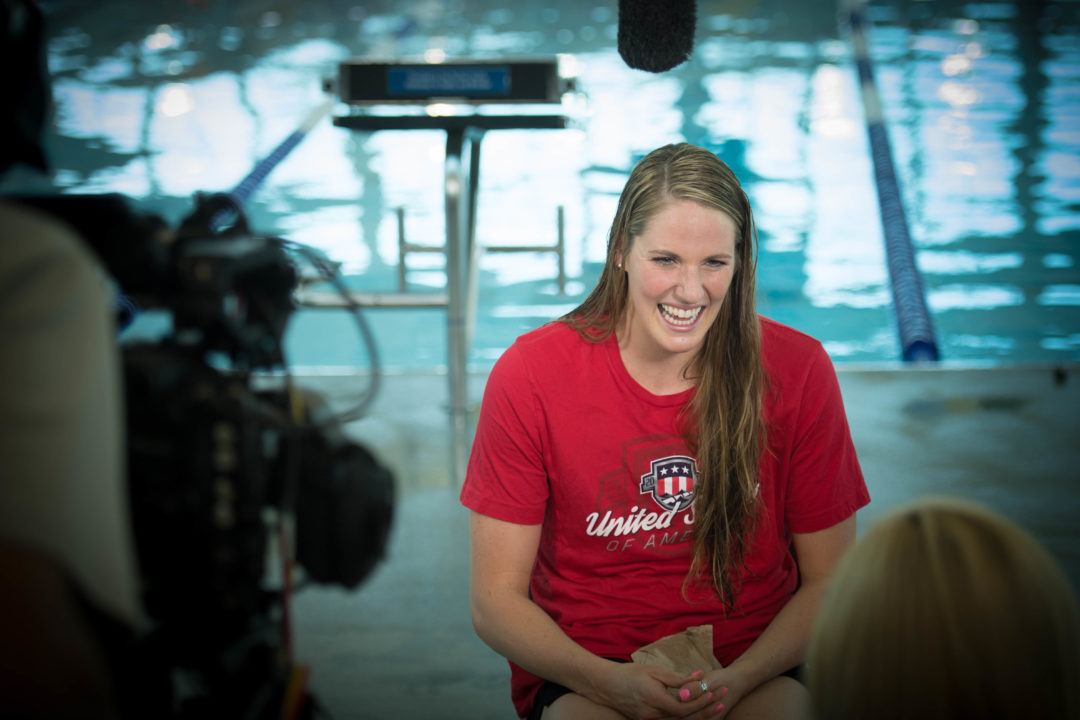 As for Missy Franklin's career, the 22-year-old says, "I'm not exactly sure where I'm at, but I'm perfectly ok with that." Archive photo via Mike Lewis/Ola Vista Photography

Fans and swim enthusiasts attending the 2017 FINA World Junior Championships in Indianapolis were treated to an appearance by 5-time Olympic champion Missy Franklin. The American superstar greeted young fans, signed autographs and took plenty of selfies as the competition is wrapping up with just one day left at IUPUI Natatorium.

Speaking specifically to her own career, Franklin says that she ‘doesn’t really know where she is right now’, but that the 22-year-old is ‘perfectly ok with that.’ The former Cal swimmer says she’s just ‘really enjoying getting back in the water and getting back to training again.’

In the interview below, courtesy of FINA, Franklin also talks about expectations of world-class athletes, as well as what it means to be a mentor for the junior athletes in the pool this week.

With youngsters Regan Smith and Kathleen Baker getting only better and better and already being at world class level, sadly there is not room for Franklin…

I don’t think Baker will be a problem if Missy COMES BACK BACK, but imo Regan will own the 100 and 200 backstroke world records.

Do you know what the 200 back world record time is?

I can see her being a big factor on that 4×200 free relay. I am amazed that even Katie has yet to break Missy’s 200 SCY free record. And she did it with just so-so turns and underwater!

200 scy is more like 100lcm than 200. But if federica or sjostrom tried probably the 200 scy would be blown specially by Sjostrom

Missy’s problem is she is too good of a person. Most women who remain relevant after 22 are the ones who are on PEDs. Sad reality. Missy would never do something like this. I am still hopeful she’ll get back to the top.

That is among the most ridiculous statements ever.

Sjostrom is 24, Hosszu is 28, Leah Smith is 22 and improving, Maya Dirado was 23 at Rio, for pete’s sake Dana Vollmer made an Olympic team at 28 after having a kid! Plenty of women are more than relevant after 22 without the need for PEDs.

She should train for the 200 fly. It’s her best shot at another major international team.

But that 2:11 was much based on his back and free speed which she did not show lately (her 200 free on Rio was quite saddening)

I can’t imagine she is worried about the small USA Swim stipend! She will probably enjoy doing her own thing as far as public appearances and mentoring.

I don’t think she’s done yet. I can’t say we’ll see her as dominant as before, but I think she’ll swim through 2020 and make the Olympic team in at least one event. Now that she’s been open about the stresses and her problems coping with them, I think she’ll bounce back pretty well as long as she stays healthy. If she does retire, that’s fine. She can make fine money as an ambassador and public speaker.

While she’s dithering with her return to swimming, other swimmers are passing her by.

She might have had a chance in her WR event, the 200 back.

But Regan Smith has emerged to take her place.

Regan Smith, for all her talents, hasn’t been within 3 seconds of Franklin’s best time so this is more about whether Franklin can findthe health, (physical) flexibility, motivation, strength, etc. to make a decent comeback. It’s tough to rebound from where she’s at but she’s young enough I wouldn’t write her off. Honestly, if she did nothing but get in 2016-era shape but learn to do average starts and turns, she’d have an Olympic medal.

i think she’ll have a schmitt-like comeback

Off the national team payroll
Effective September 1? They made her work all the way until the end lol.

I love Missy but I’m also trying to be realistic here. Any idea on what sponsorship agreements may have already ended? Or are all still on board for the next little bit? Not trying to be negative but just curious how sponsors balance performance vs. ambassador and the demands of being a pro athlete. She is a great face for USA swimming but when does performance matter?

It’s the first last and only thing that matters. I guarantee if Lochte had won the 200 IM in Rio he would have had zero sponsors drop him. same reason Phelps kept most of his even after his second DUI. People still thought he could be the best and they were right.

Try reading that for starters.

I wish Missy success and happiness in her retirement.

She very well may be closer to retirement than peak form of 2012, in fact she probably is, I have no idea…but let’s not put her out to pasture just yet. Is she going to be in lane 5 next to Kathleen Baker or Regan Smith anytime soon at a big meet, No – but she is 22, not 32 and has earned the right based upon performance & class to work off any timeline she needs as she attempts a comeback.