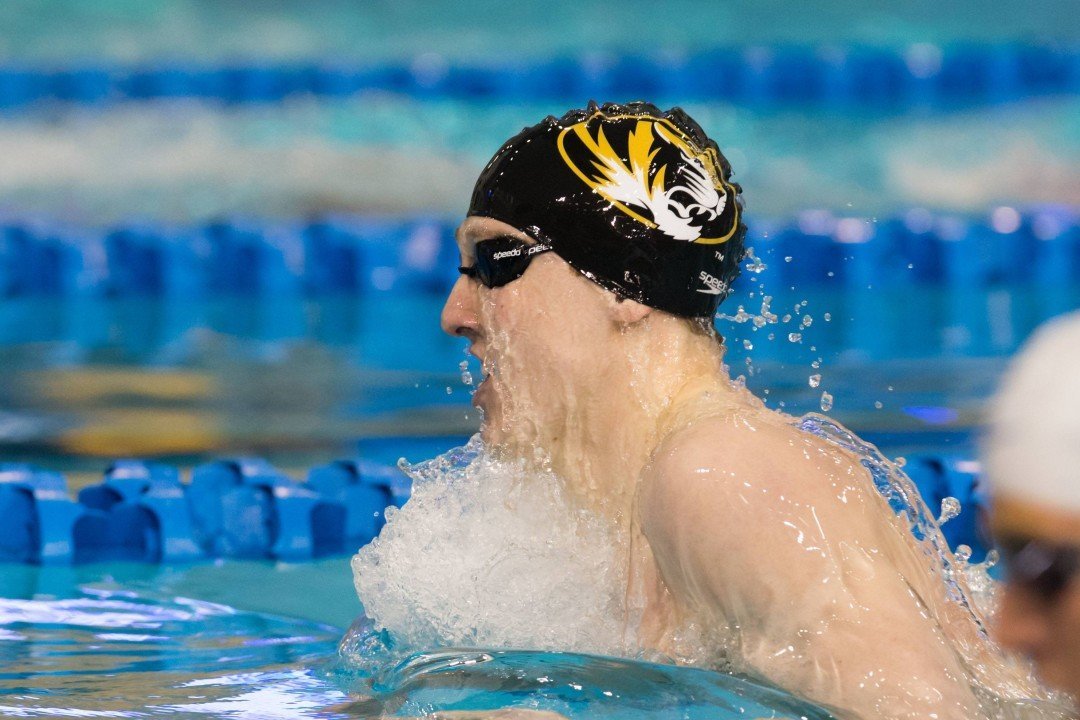 Breaststroker Sam Tierney (above) aligned himself with the best breaststrokers in the nation so far in the new year on Friday. Archive photo via Tim Binning/TheSwimPictures.com

The final score on the women’s side went 135-87, while the men’s tally was 133-81 – scores that were both heavily impacted by Missouri choosing to exhibition swims rather than accept full points.

The meet must be put in perspective of the different levels at which the teams compete. For the Drury men, their swimmers touched the wall first in three individual events, as compared to just one last year.

The 2015 individual events started with a good battle in the men’s 1000 free between Missouri’s Eegan Groome (9:29.60) and Drury’s Fahad Alkhaldi (9:33.57). Groome built a big lead mid-way in the race, though Alkhaldi made it a little interesting with a fast last 100 yards.

For Alkhaldi, that moves him up into the top 25 in the country in that event on the season (remembering that the 1000 free is an NCAA event in Division II).

Both swimmers are probably already qualified for NCAA’s  in their respective decisions (Feher has an automatic qualifying time in the 100 back), but the 200 backstroke is Griffin’s better event – and that wasn’t raced at this meet.

Other good swims on the men’s side of this meet included a 53.89 in the 100 breaststroke from Missouri’s Sam Tierney. That’s the second-fastest time in the SEC so far in the new year (behind Nic Fink of Georgia) and third-fastest in the country (behind Fink and Will Licon from Texas – who did their swims head-to-head).

On the women’s side, the Missouri breaststrokers were a highlight of the meet as well. There, Abby Duncan won in 1:01.84 and Katharine Ross took 2nd in 1:02.50. Duncan, from her time at Auburn prior to a transfer, had a habit of swimming very fast in January, and that trend continues in her first varsity season with Missouri.

The best win for Missouri goes to Hannah Stevens in the women’s 100 backstroke, where she swam a 55.80 to take down the 55.96 of Drury star Katya Rudenko. Rudenko was the double Asian Games silver medalist in the 50 and 100 backstroke over the summer representing her native Kazakhstan, is already a two-time Olympian at 20 years old, and will contend for multiple NCAA Division II titles in March.

Stevens’ splits to take that win were 27.39 – 28.41, giving up some ground to Rudenko on the front-half, but coming home strong for a well-thought swim.

Later in the meet, Rudenko would lead off Drury’s first-place finishing 200 free relay – a relay anchored by Wen Xu in 23.28. Missouri exhibitioned their relays, but also spread their top swimmers out between the “A” and the “B”.

Barbiea was a double-winner on the day, taking the 100 fly as well in 54.38. She’s got a penchant for very fast swims in-season, and while that’s been a little muted this season (a few tenths year-over-year), Barbiea is lining up to swim her best race at NCAA’s in March rather than at her mid-season invite.