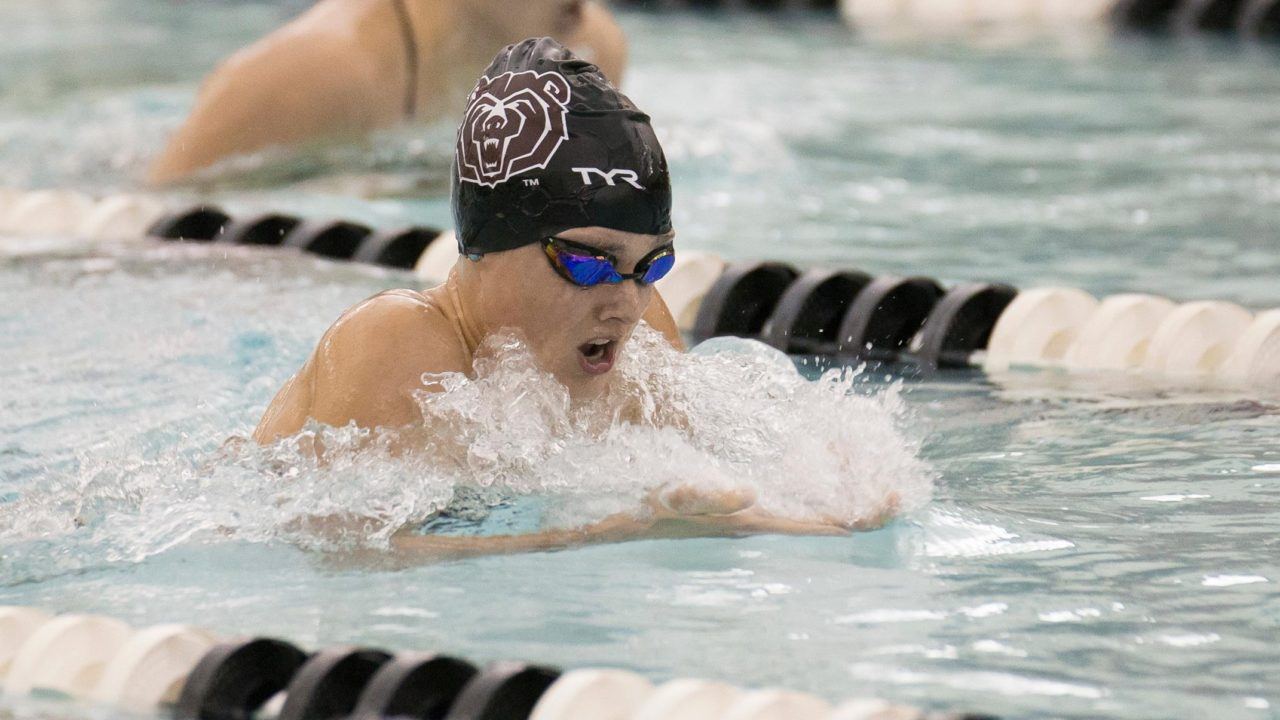 Eight student-athletes came away with individual victories in the Missouri State swimming and diving team’s win over the Drury Panthers, Friday night at Hammons Student Center.

Coming into the dual tied at 16-16 overall in its series history, the Missouri State men broke the double-digit deadlock and posted a 144-87, landslide victory over the Panthers while the women’s team recorded a final score of 135 points to outscore Drury’s 107 points.

“I am very pleased with our performance against a great Drury team,” head coach Dave Collins said. “Our group did a really good job of racing tough tonight. We thought we’d be at a disadvantage in a few spots before the meet, but we had people step up to get the job done.”

Beginning with the first race of the night, the Bears took first and second in the 400 medley relay. Minki Kang carried out the momentum to the 1000-yard freestyle, touching the wall first in 9:22.00 while sophomore Antonio Thomasfinished second (9:28.46).

Osvath picked up his first victory of the night in the 200 IM where he broke the pool record, held by former Bear and Olympian Uvis Kalnins, with a time of 1:48.98. Heye followed Osvath for a second-place finish in the event. Claiming gold once again, Osvath was the top finisher in the 200 butterfly while teammates Phillip Willett and Kacper Cwiek finished second and third, respectively.

Heye earned his victory in the 200 breaststroke, where he finished the event in 2:02.39 – just 1.27 seconds faster than runner-up Blair Bish. Lucas Paloschi, Samuel Senn and Bish went 2-3-4 in the 50 free while Nicholas Theunissen and Conner Ripp finished second and third in the 200 backstroke.

Similarly, Will Brand and Cwiek took second and third in the 200 free and Kang, Thomas and Kevin Douglas finished 2-3-4 in the 500 free. The Bears closed out the meet with second and third-place finishes in the 400 free relay.

MSU Women 135, Drury 107
Picking up the program’s seventh victory against Drury, the women came away with six victories over the Panthers. Divers Ashley Yarbrough, Dayana Popa and Peyton Smith went 1-2-3 on both the 1- and 3-meter diving boards – bringing in quality points for the women’s team.

Senior standout Sydney Zupan led the swimmers with victories in the 200 free (1:52.12) and 200 back (2:02.39). The Bears claimed more top spots in those events as freshman Libby Howell took second in the 200 free and Madison Brown and Hanna Flanagan finished second and third in the 200 back.

In the 1000 free, sophomore Vikte Labanauskaitetook first and set a personal record with a time of 10:30.27, while Brooke Dreiling finished second (10:33.40). The Bears went first and second in one more event as Loretta Stelnicki claimed the 200 free, followed by freshman Anna Miller. Stelnicki and Miller went on to finish second and third in the 100 free later in the evening.

“Our program has a lot of respect for Drury and what they do,” Collins added. “I think this meet is a great one because it brings out excellent competition from both teams. This was an important meet because it’s our last chance to fine-tune some things before our big, mid-season meet – the Purdue Invitational.

“We look forward to spending the next couple of weeks with some good training and getting to put on a racing suit to see where we’re at mid-season.”

Coming Up Next
The Bears return to action Nov. 16-18 at the Purdue Invitational at West Lafayette, Ind. Live results will be available on Meet Mobile. For all the latest information on the Missouri State swimming and diving team, visit missouristatebears.com or follow @MoStateSwim on Twitter.