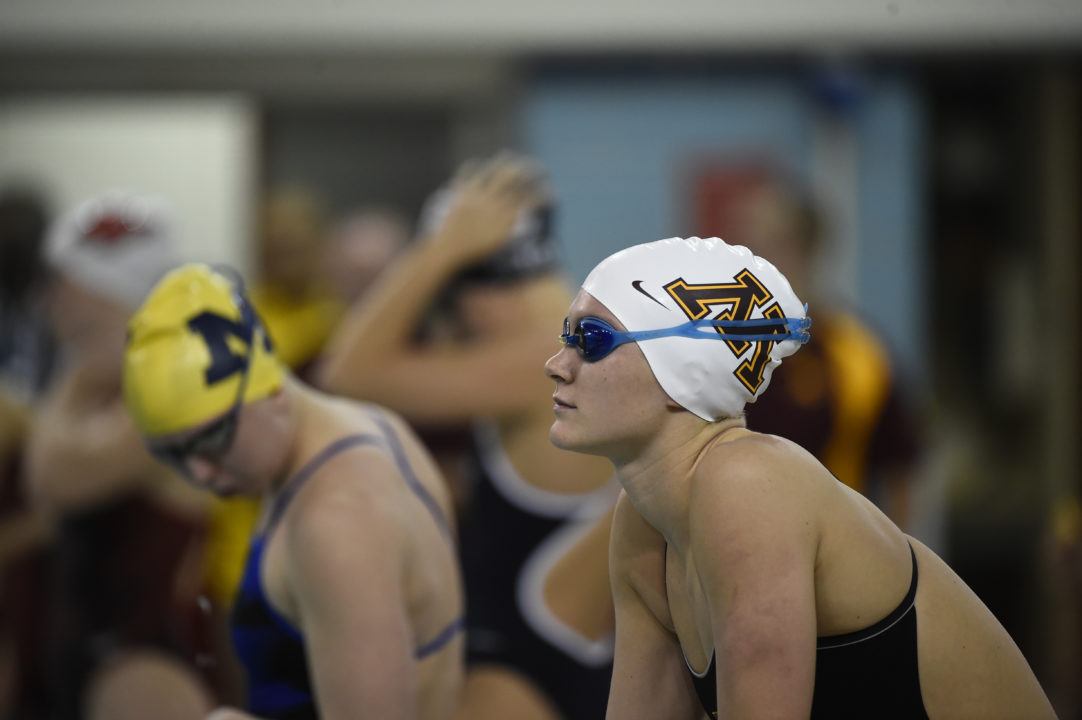 The final session of the 2017 Minnesota Invite concluded with victories for both University of Minnesota teams… but also for both University of Iowa teams. Here’s how: The Minnesota Invite was not strictly a dual between Minnesota and Iowa, though they were the only college teams present. When the results were tallied between the “collegiate” competitors, the Minnesota women came away with 1,360.5 points to Iowa’s 1,128.5, while the Minnesota men reaped 1,264 to Iowa’s 1,261. When club teams are taken into consideration, however, the Iowa women came away with 390 points to Minnesota’s 344, and the Iowa men with 388 to Minnesota’s 346.

Tevyn Waddell broke away from the field at 125 yards and didn’t look back as she stormed ahead to win the women’s 200 yard backstroke in 1:54.84, just missing her personal best of 1:54.40. Teammate Chantal Nack followed up to take 2nd place with a 1:56.93, adding one-tenth to her time from the prelims. Waddell is now tied for 5th in the Big Ten Conference standings, while Nack sits at 13th.

Kenneth Mende maintained his top position to win the men’s 200 backstroke in a 1:44.02, though he added a couple tenths from his prelims time. Minnesota’s Thomas Rathbun tried to make it interesting on the back half of the race, but didn’t have enough to catch Mende, finishing in 1:45.68, barely edging teammate Nicholas Saulnier, who touched 3rd in 1:45.79. Mende is now 2nd in the Big Ten this season in the 200 back.

Zoe Avestruz barely out-touched teammate Mackenzie Padington, who has been on fire this weekend, to win the 100 freestyle 48.43 to 48.45, and nearly struck her best time of 48.33 from the B1G Championships last season. Though she flipped nine-one-hundredths behind Padington at the 50, and still trailed at 75, Avestruz utilized her underwater kick on the last turn to pull slightly ahead and touch first. Padington, who won the 500 (4:38.54) Thursday night and the 200 Friday night, took another 1.2 seconds off her already massive best time from morning prelims. In prelims Padington swam a 49.68, breaking 50 for the first time (though this is her first season swimming yards).

Avestruz’s time ties her for 15th in the NCAA, while Padington’s jumps her up to 17th.

Bowen Becker improved upon his morning swim, but just missed going 42, hitting the wall for 1st in 43.02. Becker’s time ties him with Maxime Rooney (Florida) for 12th in the NCAA this season, though is still about eight-tenths off his best time from the B1G Championships last season. Jack Smith from the University of Iowa held on for 2nd and broke 44, touching in 43.93, which is good for 3rd in the Big Ten Conference so far this season, behind Becker and Indiana’s Blake Pieroni.

Post-grad Kierra Smith took the women’s 200 breaststroke, surging ahead on the second 100 to win 2:07.14 to Lindsey Kozelsky‘s 2:09.98. Kozelsky added half-a-second to her time from the prelims, but still sits at 19th in Division I with that swim, and 2nd in the Big Ten.

Danielle Nack greatly improved upon her prelims time in the 200 fly, though missed her own school record, finishing in a 1:56.46. Nack’s time moves her up to 16th in the NCAA this season. Kelsey Drake of Iowa took 2nd in 1:59.45, but missed her PR of 1:59.03. In the Big Ten Conference Nack and Drake now sit at 3rd and 14th, respectively.

Minnesota’s Matt Thomas cruised to victory in the men’s 200 butterfly this evening, touching in a 1:46.76, just missing his best time of 1:46.55. Iowa’s Michael Tenney claimed 2nd in 1:47.49, followed by 100 fly champion Tuomas Pokkinen of Minnesota. Thomas now moves up to 7th in the Big Ten conference, while Tenney jumps to 8th in the conference.

The Gopher women won their final event of the meet by nearly 4 seconds, finishing in 3:16.54 to Iowa’s 3:20.31. Mackenzie Padington led off the relay with a 48.58, and teammate Zoe Avestruz matched her split exactly on the 2nd leg. Danielle and Chantal Nack took over the back-half of the relay splitting 49.65 and 49.73, respectively. Only one Iowa swimmer broke 50: Hannah Burvill, who touched in 49.54, serving as the lead-off leg for the Hawkeyes.

Bowen Becker broke the tie he temporarily established with Florida’s Maxime Rooney for the 12th-fastest time in Division I this season, leading off the Minnesota A relay in a 42.99. Becker was pursued by Iowa’s Joseph Mhyr who touched in 43.99. Becker’s lead-off split was the 2nd-fastest in the field, but was eclipsed by Iowa’s Jack Smith who anchored in a 42.96.