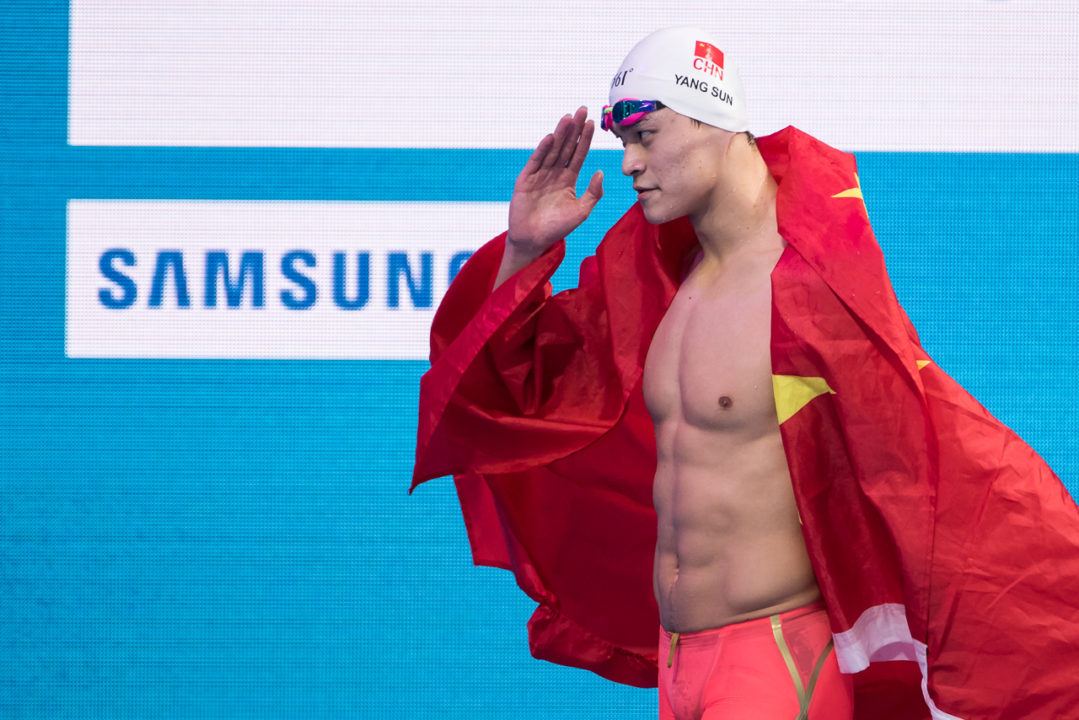 During the 2017 FINA World Aquatics Gala in Sanya, China, Sun Yang earned honors for his ‘outstanding contribution to swimming popularity in China.’ A multiple Olympic champion, Sun scored 200m and 400m free gold at the 2017 World Championship in Budapest, setting a new Asian record in the 200m.

The star topped the list as China’s Most Influential Athlete for the 4th consecutive year and landed on the Forbes China Celebrity List for 2017, representing the only athlete to make the exclusive line-up.

As for being honored by the world swimming governing body, FINA, this weekend, Sun stated, “This award is certainly an encouragement to me. I’d like to extend my sincere appreciation to FINA, an organization that endeavors to promote swimming worldwide all these years. It not only gives us athletes a level playing field but also spreads the glamour of swimming to all corners of the world. It’s my great pleasure to be part of this great cause.” (Xinhuanet)

The 26-year-old also said, “I might have talent, but my success wouldn’t be possible without help from my amazing mentors, encouraging teammates and loving family and friends.”

The entire list of FINA award winners can be found here.

The last time I checked, China still has the largest population on this planet and is getting developed really fast. It is great to see Sun and other Chinese swimmers making swimming a popular sport event in China, just imagine all the potential talents in that vast population pool!
Like him or not, his positive influence in swimming in China should be applauded.

He’s one of our few hopes of taking down Biedermans gross 400m free record.

Yeah! Some of you may not like Sun, but is he really worse than a fatty with a jetpack? I want to believe that Grothe has a shot, but 3:39 would be comparable to a 4:02… I see Grothe getting a Bronze in Tokyo best case scenario.

Birds of a feather, maybe?

“In an audiotape recording of Al Musallam [FINA 1st VP] discussing a deal with a Chinese marketing agency on behalf of the OCA, Al Musallam reportedly asked for a 10 percent “commission.” Al Musallam is the Kuwaiti director general of the OCA, but such an arrangement where funds went directly to him and his associates would be considered highly unusual.

Do not like this guy at all. Very little respect for him. Popular for negative reasons only maybe.

“I might have talent, but my success wouldn’t be possible without help from my amazing mentors, encouraging teammates and loving family and friends.”
Maybe he should add steroids to that list.

YES! I love this guy, I love the controversy, and I hope he breaks 3:40. Also hope to god his heart is actually messed up which completes the legend and explains a lot.

Forgive my ignorance, but is ‘outsandnig contributiong’ a typo or a translation?

Typo on my end, fixed, thanks!