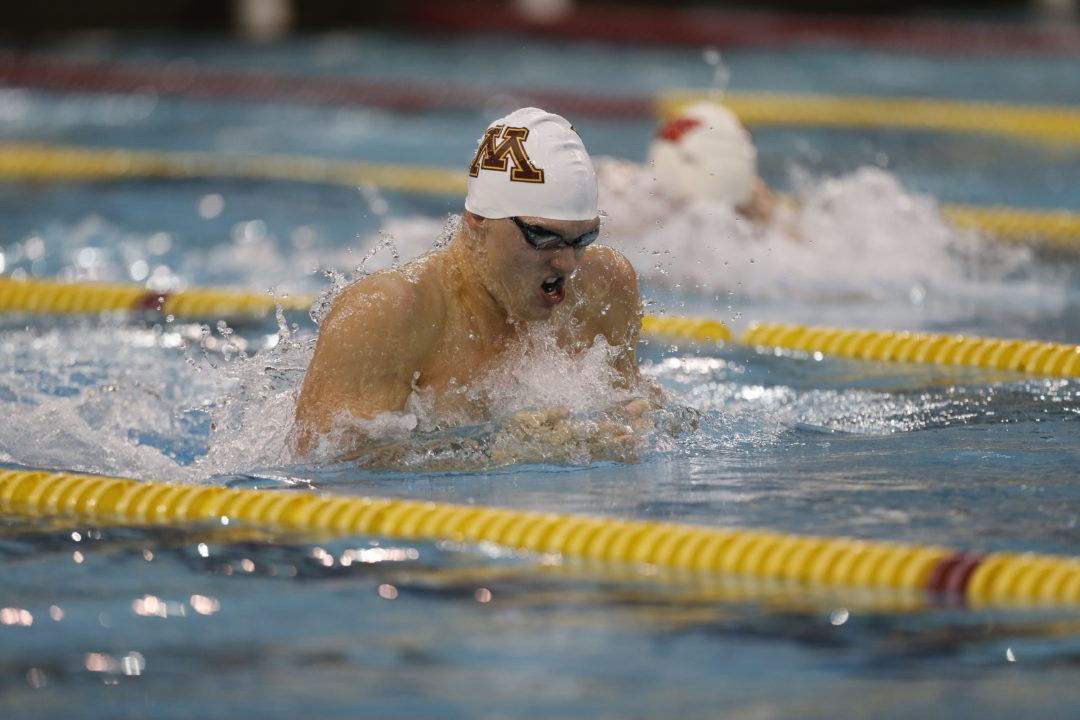 Conner McHugh posted a 1:55.38 to easily take the top seed going into tonight's finals of the men's 200 breaststroke. Current photo via Courtesy University of Minnesota Athletics

Minnesota’s Tevyn Waddell kicked things off with a 1:55.40 in the women’s 200 backstroke, leading teammate Chantal Nack by nearly 1.5 seconds going into tonight’s final. Waddell split 55.78 on the first half of the race and 59.62 on the back half, making her the only woman to crack the 1-minute barrier on the second 100.

Zoe Avestruz and Hannah Burvill lead the field in the women’s 100 freestyle, notching 49.10 and 49.19-second performances, respectively. Avestruz comes within one second of her PR of 48.33, while Burvill improves her best time by 0.03. Sitting in 3rd going into tonight’s final is Minnesota’s Mackenzie Padington with a 49.68. Last night Padington set a new Gopher record in the women’s 200 freestyle with a 1:44.15, flipping at 100 yards in a 50.64 seconds. Given how well she’s been swimming Padington could upset the field tonight.

Bowen Becker leads the men’s field in the 100 freestyle by nearly a full second with a 43.18 against University of Iowa’s Jack Smith who touched in 44.11. Both Becker and Smith sit about one second outside of their best times.

Post-grad Kierra Smith leads the women’s 200 breaststroke with a 2:08.68 going into evening finals. Smith is followed by Minnesota’s Lindsey Kozelsky who turned in a 2:09.48, more than four seconds ahead of third-seed Rachel Munson. Munson, who edged Kozelsky for 2nd place in the 100 breaststroke last night, showed similar closing speed over the second 100 in this morning’s prelims to Smith and Kozelsky, though she only took it out in a 1:04.96 to Smith’s 1:01.94 and Kozelsky’s 1:01.15. Kozelsky’s prelims time puts her at 13th in the NCAA this season, though it’s still four seconds off her best time.

Conner McHugh posted a 1:55.38 to easily take the top seed going into tonight’s finals of the men’s 200 breaststroke. McHugh’s time moves him up to 8th in the NCAA so far this season (accounting for ASU’s Christian Loren‘s preliminary time at the Texas Invite). McHugh was nearly two seconds off his best time of 1:53.61, but could challenge that in this evening’s finals.

Danielle Nack leads the field in the women’s 200 butterfly with an easy 1:59.09, making her the only woman under 2:02 in the prelims. Last night Nack nearly cracked the school record in the 100 fly by posting a 51.79 to blow away the field. Already the school record holder in the 200 fly with a 1:55.67, Nack is set up very well to lower her mark tonight.

Minnesota’s Matt Thomas will take lane four in the final of the men’s 200 fly after registering a 1:48.13. Thomas is within striking distance of his best time of 1:46.55, but will get a challenge from Iowa’s Michael Tenney who won the 400 IM on Friday in a 3:52.54. Minnesota teammate Tuomas Pokkinen posted a 1:49.31 to take the third seed in finals this evening. Having already won the 100 fly in a 47.02, Pokkinen will likely set the pace early.