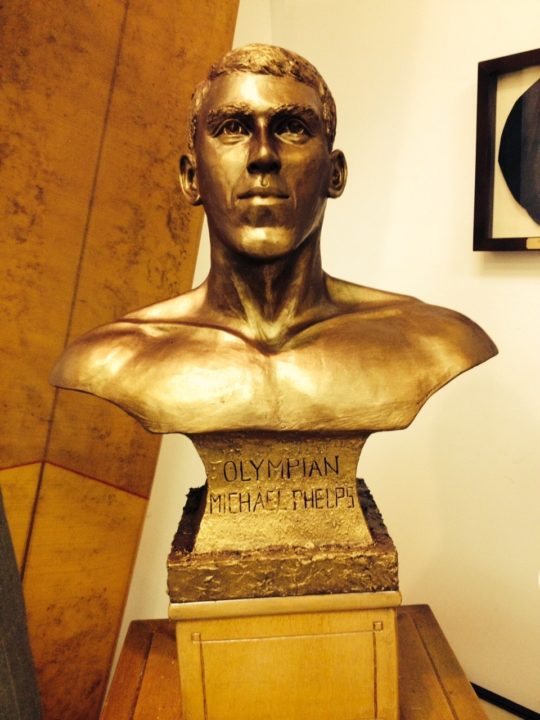 A statue of Michael Phelps now rests in the International Swimming Hall of Fame's art collection, though the man himself is still not yet inducted. Current photo via Bruce Wigo/ISHOF

Michael Phelps won’t be eligible for official induction into the International Swimming Hall of Fame until at least 2016 (longer if his comeback comes true), but his laundry-list of accomplishments are already well-worth display at the Ft. Lauderdale-based museum (for now) unveiled a new statue of the Greatest of All-Time on Wednesday morning.

The International Swimming Hall of Fame’s artist-in-residence Jean Ermann Desimots unveiled his newest creation, a bust of Michael Phelps (eerily similar, and perhaps a foregone predecessor, of the one that an official inductee might receive).

“Swimming, as a sport, doesn’t have a lot of statues, great artwork that memorializes our great talent and stands the test of time,” International Swimming Hall of Fame president Bruce Wigo said. “It’s our intention to create more artwork like this one of Michael Phelps to honor great athletes in aquatic sports.”

Desimots story in itself is quite fascinating; he grew up in Haiti in a family of artists. His father’s ceramic studio in Port-au-Prince was an Artist hot-spot in the 1970’s and 1980’s. (Read more about the artist here).

The Phelps statue is made out of ceramic and is described as being quite heavy. It’s one of several weighty works done by Desimots. Included among them is a statue of Adolph Kiefer: an American swimmer who won the 1936 Olympic gold medal in the 100 backstroke, became a legendary Navy swim instructor credited with saving untold-thousands of lives, and the founder of the Kiefer Aquatics company.

Also included in the collection is a replica of a famous, now lost, water polo statue from 1936, and an original synchronized swimming sculpture done by Desimots.

Beneath them is the image of a girl riding a dolphin that depicts the mythical Maori story of Hine Poupou, a mythical figure who swam the Cook Strait between the North and South Islands of New Zealand. The 14-mile journey is a highly treacherous one; as of posting there have only been 83 successful crossings by 73 individuals. By comparison for just how dangerous this journey is, the English Channel, which is 50% longer in distance, has been done several thousand times.

It’s not Michael’s time yet, but when the years pass and his opportunity rolls around, his bust will be there waiting to greet him.

Thanks to Bruce Wigo for sharing the story of the ISHOF’s resident artist, and the images, below.

statues of Michael Phelps (left) and Adolph Kiefer (right) at the International Swimming Hall of Fame.

Where is exactly is the though about you. Indicte Hall Of Fame in Aqua world. But all wonderful mavelous years in pool an outside the pool.

This is cool, and thanks for sharing.
A wee bit of criticism, though. Sometimes you have articles like this with a cool picture… but it isn’t cropped right so on the main page the swimmer’s head is cut off.