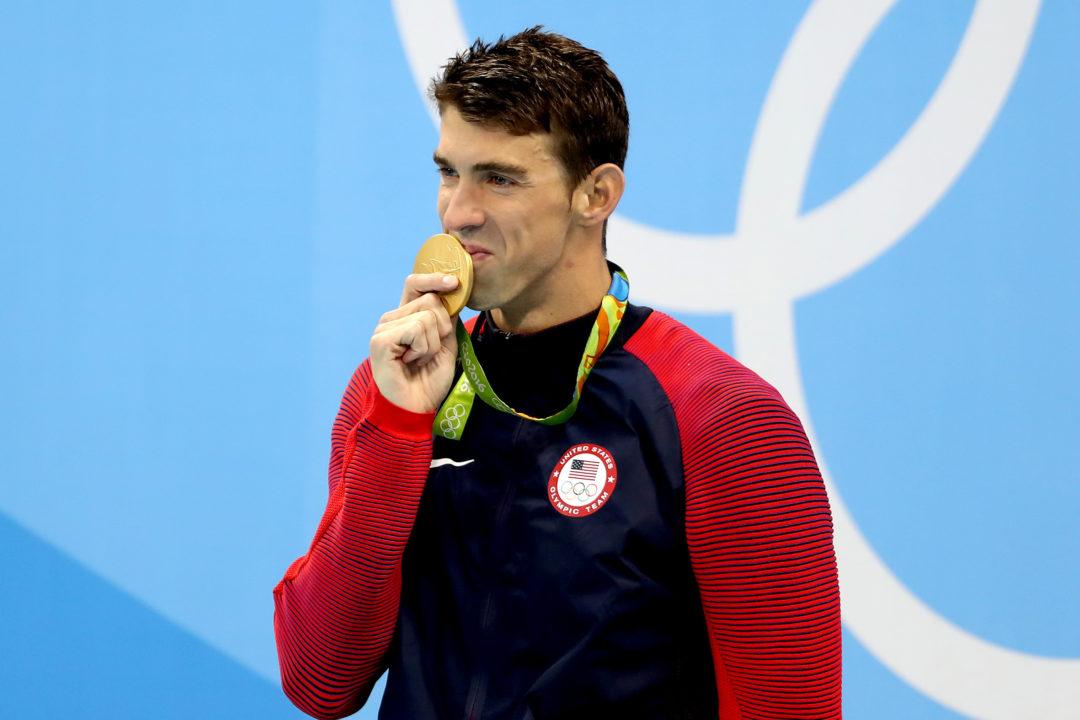 At the FINA/Alisports World Aquatics Gala last night, just before the start of the 2016 World SC Championships, FINA announced the winners of their 2016 awards. Archive photo via Simone Castrovillari

At the FINA/Alisports World Aquatics Gala last night, just before the start of the 2016 World SC Championships, FINA announced the winners of their 2016 awards. Taking the Swimmer of the Year awards were American Michael Phelps for the men and Hungarian Katinka Hosszu for the women. FINA cites in a media release the importance of athletes’ performances in Rio, and how they “largely determin[ed] the outcome” of the awards.

Phelps, who needs no introduction, added to his Olympic legacy this summer with six more medals, five of which were gold. The G.O.A.T. earned individual golds in the 200 fly and 200 IM and a silver in the 100 fly. He was a key relay leg, swimming on all of the USA’s relays which all won gold. This looks to be a legitimate retirement for MP, who rounds out his incredible career with 23 gold and 28 total Olympic medals across five different Games.

Hosszu, meanwhile, finally earned her first Olympic golds after years of dominance without such a medal. She took home golds in the 200 and 400 IM as well as the 100 back, and added a silver in the 200 back. With four total medals, Hosszu out-did any other swimmer in Rio with the most individual medals. Additionally, she cracked the world record in the 400 IM, taking it to an eye-popping 4:26.36 with a huge win, and took down the Olympic record in the 200 IM.

Before the conclusion of the ceremony last night in Windsor, FINA had a special award to give out. To honor the greatest ever, FINA named the “Aquatic Legend, the Greatest of All Time” award to Phelps. He ends his career as the most successful Olympian of all time.

A little confuse by the counting system…
Is it more about Olympics or World Cup series?
I get Hosszu over Ledecky, but…how about Phelps and Morozov?
How much did they weight for world record?
For this year, Ledecky 3, Morozlov 2, Peaty 2, Hosszu 1, Phelps 0
By this result, I can tell world recrods didn’t weight too much.
I am deeply interested to know Murphy/Peaty/Morozov’s points difference.
In other word, 2-4 place male swimmer of the year according to FINA counting system.
Not to against anyone, just tried to make things clear.

Conclusion: I can see Ledecky not winning FINA swimmer of the year for six consecutive years(3 more years to go 🙂 ).

GII – it’s been described as a combination of the two. In the case of Hosszu vs. Ledecky, Hosszu had 3 Olympic golds and 1 silver, Ledecky had 5 golds and 1 silver (1 gold and 1 silver on relays). Apparently, by the FINA system, Hosszu’s other exploits were enough to lift her past Ledecky.

In the case of Phelps vs. Morozov, while Morozov clearly did more in the World Cup Series, Phelps had 5 Olympic golds and 1 silver. Morozov didn’t even make an individual final. So, by their scoring system, Morozov’s (or Le Clos’) World Cup run was not enough to overcome that much of an Olympic gap.

FINA’s criteria are clear for the athlete of the year award:

MP vs Morozov?
It’s outrageous. 😆
Who cares about the world cup meets or SCM worlds, especially in an olympic year?

One more thing, they didn’t wait after Short Course Championship for the announcement.
What if someone breaks a couple world records in Windsor?
They announced this award at January in the past.