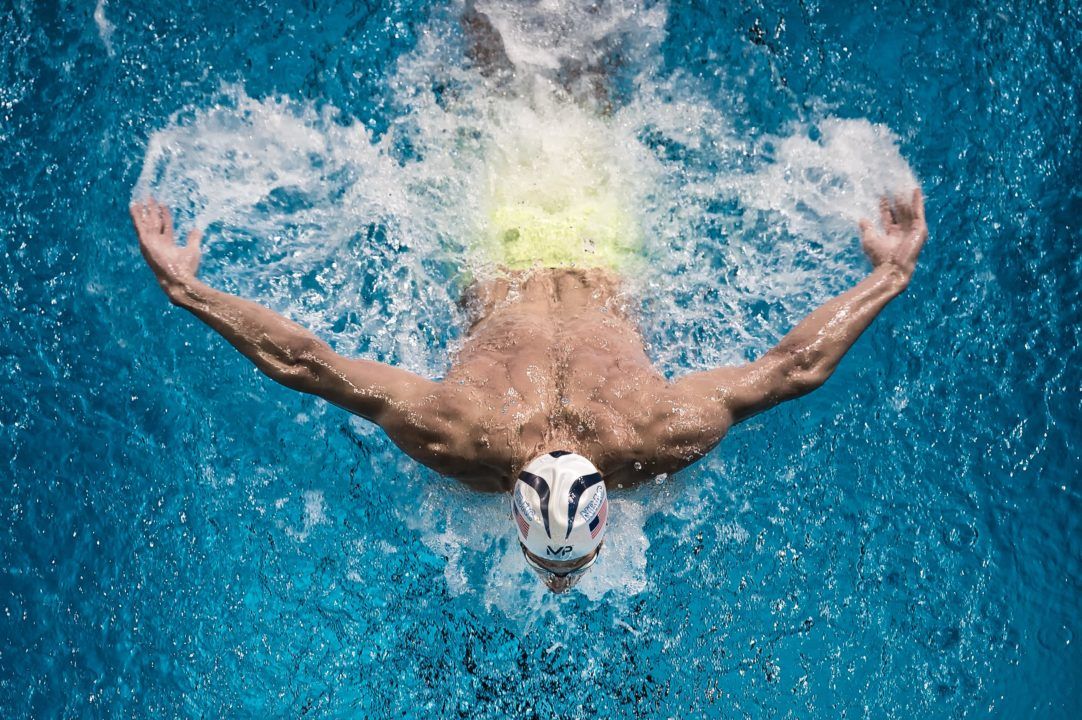 Read how the GOAT, America's Michael Phelps, believes he would have reacted had the 2008, 2012 or 2016 Olympic Games been postponed. Archive photo via Mike Lewis/Ola Vista Photography

The most decorated Olympian of all time, American Michael Phelps, spoke with NBC Sports with reaction to the Olympic Games in Tokyo, Japan having been postponed to next year.

In addition to expressing concern for athletes’ mental health, in line with his role as a passionate advocate both on a personal level, as well as through his partnership with Talk Space, Phelps revealed how he believes he would have responded to a delay in his last 3 Olympic Games.

First, on the mental health front, Phelps empathizes with athletes having worked so hard for a particular time-based goal, only to see it slip away for another 12 months (most likely).

“Your whole life is pointed toward this moment,” he said, “And then this huge curveball. `Nope, you’ve got to wait another year.’ If this had happened to me, I would be completely flipping out at the uncertainty. I mean, speechless. Like, is this a bad dream?”

“All of this is so hard to wrap your head around,” said Phelps. “I just feel really badly for all the athletes who have made it this far. On the one hand, I’m relieved that they’re getting another year, and rightfully so. But the waiting also makes it a lot more difficult.”

“I really, really hope we don’t see an increase in athlete suicide rates because of this. Because the mental health component is by far the biggest thing here. This postponement is uncharted waters. We’ve never seen this before. It was the right decision, but it breaks my heart for the athletes.”

You can read the entire interview on NBC Sports here.

I think this is the best take of them all.

Good perspective from the GOAT

My biggest concern remains in the selection process, particularly around the trials. Will a trials meet be held? Or will USA Swimming select a team based on criteria? If trials happen, when and where? Will the time standards or qualification period chance?

The point Phelps makes is absolutely true for Olympic hopefuls. However, if the trials change, what will the response be to the hundreds of swimmers that worked to qualify for the trials as their meet? Imagine how drastic operations changes could impact their mental health and well-being, especially if the meet is not held or limited significantly.

There’s a whole year to figure it out. Other things to worry about right now.

If the Games are moved to the same time slot in 2021 as they were in 2020, USA Swimming said pre-postponement that they would just repeat the Trials that was planned for 2020 in 2021.

Any alternative plan would probably be fluid depending on when the dates are.

why would they hold trials in late 20 or early 21?

USA Swimming said that if the Olympics are still in late-July, they still plan to go to Omaha in the summer.

If for some reason the IOC/Tokyo decided that a January-April was the only feasible timeline, then the trials might be in late 2020 or early 2021.

Didn’t I hear that Omaha said “not so fast”? Or was that an unfounded comment?

Given the announcement of July/August 2021, it’s basically postponed for a year. Same trials process could be ran through prior to that for the US and most other countries as well.

On a positive note imagine a 2017 Olympic team with MP and 2017 Dressel… quite formidable!

Wow yes. Schooling would have missed his very small window in the 100 fly.

Maybe. I can’t imagine Schooling’s form would have been worse in 2017 than it was in 2016, given that his drop-off was significantly impacted by winning the gold already. With another year of training, the race between him and Dressel in LCM would be been incredible.

Or imagine a supersuited ’09 games. Would MP still have bagged the 8 golds to cement his status as undisputed GOAT, and (more importantly) brought swimming to the attention of a much larger global audience?

Crazy that he won eight golds in Beijing after breaking his wrist six months before.

I wish he didn’t bring up suicide rates.

Yes that was the only Part that seemed weird to me, like I really don’t think that’s gonna happen

imagine someone being on track for the games just to get injured next year and have that taken away. But also some people got injured this year and will be better by next year so its kinda two way street.

I hope not but it something for coaches, parents, other athletes to be aware of.

Mental health is a big push for MP. I think it is unfortunate that he needs to raise that issue, but I am glad that he is willing to point out to the coaches and the swimmers that they need to be focused on more than just physical training. He is completely right. There will be swimmers who can’t handle the mental anguish of this uncertainty, and coaches need to be looking out for their athletes. And teammates need to look out for teammates.

but theres no uncertainty anymore btw. the OG are postponed

Latino’s deal with hardship alot so they have tremendous coping skills for life and thus depression levels are zero.
What has happened is very sad, but thats life man. Thats what life ditched at you. Its ok to feel bad, upset, pissed off. It’s not ok to talk about suicide.

Yes I get that now, my beautiful white (american) wife and her family have taught me that. I was just saying MP bringing up suicide where nobody else did was just overboard.
But growing up born in a South american house household. Yes words like depression were seen as being mentally weak and immature. Not easy to explain.

I”Depression levels are zero” – the medical community disagrees with this statement.

Yes zero is exaggerated more like 1/3 of white folks.
I can say Latinos just don’t use the word ( deprssion) so easily. Much much less suicide.
https://www.google.com/amp/s/khn.org/news/as-u-s-suicides-rates-rise-hispanics-show-relative-immunity/amp/

What are you noting as irrelevant?

you’re now irrelevant for this comment. you can’t possibly know a thing about swimming if you think his opinion about the olympics is irrelevant

This is the way all the athletes, especially seniors, who had made it to NCAA felt too. It slipping away from them like a bad dream.