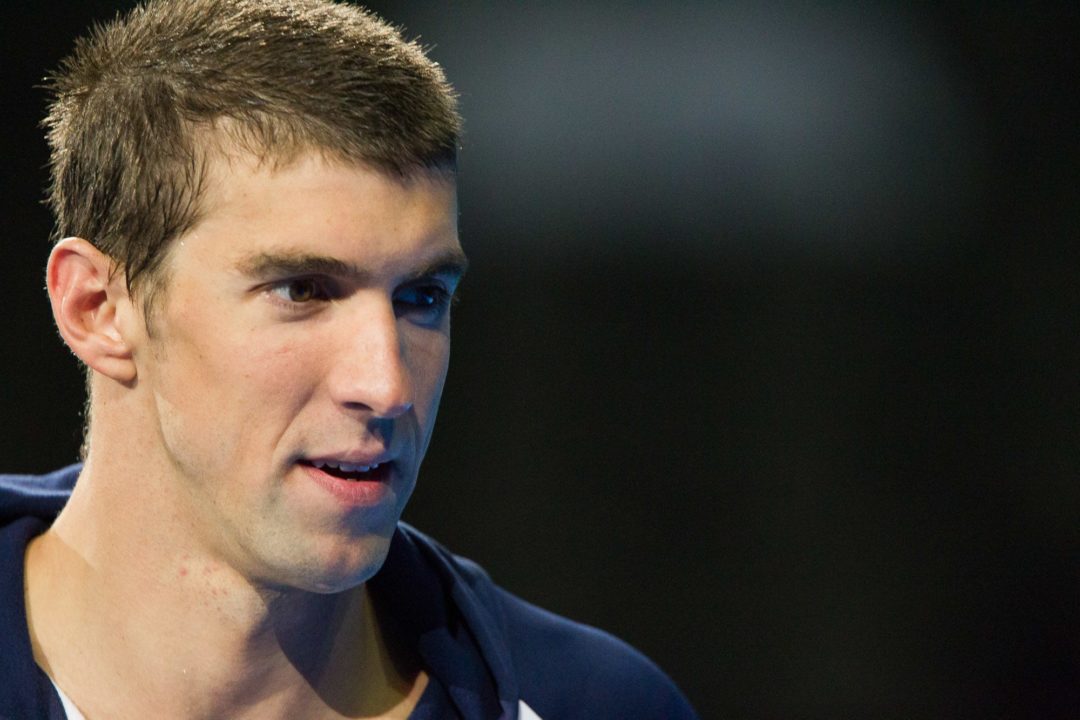 Peter Busch, a news reporter in Florida and son of the USA Swimming National Team Director, says he has confirmed that Phelps is planning a comeback. Phelps isn't so sure. (Photo: Tim Binning/TheSwimPictures.com)

Update 7:57 Central Time: Shortly after Peter Busch Broke this news, Phelps made the following Tweet that seems to deny a comeback, though he doesn’t explicitly state that he is not coming back. This could just be a cover, but it’s the closest thing we have to a from-the-horse’s mouth denial (or confirmation for that matter.) We’ll continue looking for an official, on-the-record statement from someone who knows and will state for certain one way or another. Busch acknowledged Phelps’ comment via his Twitter account, but says he still feels “very confident about [his] info”.

Original Post: It’s no joke: Michael Phelps is considering a comeback it seems. The man with more Olympic medals than any athlete in any sport in history (22) will return to the pool this coming weekend at the Olympic Training Center less than a year after saying he was stepping down for good after the London Olympics.

Phelps said many times that he had no intention of swimming professionally after the age of 30, but it would seem as though that might be where he’s headed (he would be 31 by the start of the 2016 Olympics.)

Peter Busch of NBC2 in Florida, says that he has confirmed the rumor as fact. His father Frank Busch is the USA Swimming National Team Director, so even though Busch doesn’t name a source, it would seem to be a pretty reliable leak of information. We have been unable to independently confirm the reports, however.

During his brief retirement, Phelps made a serious run into the world of golf, playing several ProAm tournaments and being the star of the latest season of the Haney Project on the Golf Channel, where pro golf coach Hank Haney tried to improve Phelps’ golf game.

Phelps will have to sit out 9 months after his return to the drug testing pool prior to returning to FINA and USA Swimming sanctioned competition. Nobody’s quite positive of when he reentered the pool, or even if he has for sure, but he wasn’t tested in the 4th quarter of 2012, meaning that it’s unlikely he’d be eligible for this summer’s World Championship Trials (or in shape, for that matter.)

Phelps is believed to be headed to Colorado Springs and the Olympic Training Center in the next week to jumpstart his return.

If he continues to swim, he can certainly use Ryan Lochte as an example.
Older swimmers generally become more inconsistent at large meets (from large meet to large meet, from my observations). We saw this was starting to be the case with Phelps, even though he was claiming to be in better shape than in Shanghai.

If he’s going for ’16, he cant use age as an excuse, especially with Lochte also racing multiple events at an older age. Phelps (if wise), will only contest the 100 free and fly, and although it will be very tempting to add the 200free for relay cause, is it an opportunity left untouched.

As for Lochte, its my general feeling that… Read more »

Locthe should stick to few events.. But if the newcomers develop as expected.. can´t see Locthe having a shot for any gold.. And I don´t think he has the mental endurance to overcome on other races if he loses his prized 200 IM (which might be his only shot for gold by now)

What a day of rumors, news, rumors, news about MP and Yannick Agnel! About Yannick Agnel it’s true. About MP I hope it’s false. I hope it will stay as a rumor. What would be the use of a comeback???????????? He’s gone on the higher possible note in London with a great gold medal in the 4X100 medley relay. What can he expect more than that? It’s a retirement when he’s at the top. Like Pete Sampras after his win at the US Open in 2002! He’s my swimming idol and I don’t want to see him in decline. He has nothing left to prove! Please MP, don’t come back!

He has gone on the highest possible note in London.

To be the first swimmer ever to four-peat in Rio.

I don’t think this rumor is true but why are you so critical? You ask what he has to gain for returning, mabye he just likes swimming and misses it. Ever thought of that? He doesn’t need something to gain from it.

So you don’t believe Phelps will “unretire”?

I hope he does. He is a rocking swimmer and has done so much for the growth of the sport.

I would not much object to a 29 + years 50 mtr challenge series. Most top swimmers could keep their original strokes up there & be forced to tackle those they overlooked after 14.

Swimming Is a great life long sport but top competitive swimming after 29 is a bit sad. Is there not something else they want in life?

Really? That’s what they used to say about 19 year olds. In 40 more years they’ll be saying it about 39 year olds. He’s got 50-60 more years to want something else. Only a few more years to swim. I’d consider it if I were him and had the most talent of anyone in the world, even if just out of curiosity. I thought what Dara Torres did was great, and, like Phelps has already done with golf, reality show, NBAC, cute new girlfriend, and his foundation, she also found plenty of other things to love between her retirements.

You are thinking of Cocoon where nobody got older than 30 . They all lounged around a pool.

Jimi James & Janis were dead by 27 . Those were the days!

lol! Winehouse and Cobain recently joined the 27 Club too. Living in hell on earth before you go is an occupational hazard in the music biz, eh. When my time comes, I hope to go out like Parry O’Brien did, midway through the 500 in a Master’s meet, except in the 100-104 age group instead of the 75-79. 😉

Yeah he’s returning to the pool.

…probably to lose weight. I doubt he’ll return to competitive swimming. It’s not unusual for swimmers to return to swimming laps to stay in reasonable shape and account for the metabolism they developed as elite athletes. But hey if some people see that he’s doing something in the pool it can only mean one thing and they won’t entertain any other explanation.

I hope he does swim again. He is a great swimmer and brings lots of great attention to my very favorite sport to do and watch!

All I have to say about this is that if this is true, Ryan Lochte was right.

1st, when I first heard I immediately thought of super troopers. You all know the line…

2nd, consider the source. Peter. Busch. Never would believe it…

3rd, didn’t he remain untested during the 4th quarter of the year and wouldn’t that effect his ability to swim worlds? Why comeback now, IF he needs to be in the testing pool 9 consecutive months, wouldn’t he have stayed in and gotten tested just to be sure?

But there’s always Masters nationals, which seems to be the destination for any number of elites coming back to serious competition who are still in the WADA penalty box.