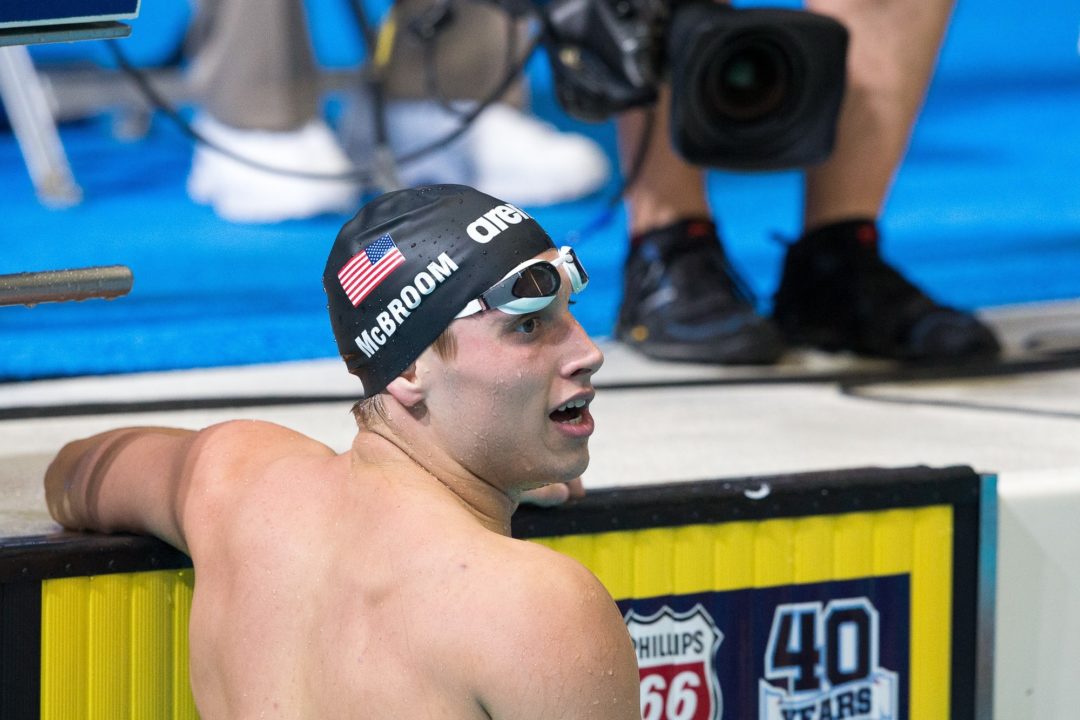 Michael McBroom, coming off of a great summer as a member of Team USA’s World Championship Team, is pulling in... Archive photo via Tim Binning/TheSwimPictures.com

Michael McBroom, coming off of a great summer as a member of Team USA’s World Championship Team, is pulling in points for Team USA at the 2013 Duel in the Pool. Not only did he earn 5 points for winning the 800 freestyle, he broke Michael Klueh’s American Record of 7:39.90 with his time of 7:33.99. McBroom is now only .05 off of Chad La Tourette’s time of 7:33.94 from the Duel in the Pool in 2009 that is the “best by an American.”

FINA allowed the full body suits to be worn for that meet, but USA Swimming had already banned them at the time, which created a limbo for American swimmers at the 2009 edition of the Duel: the first against Europe. Although La Tourette’s time is the fastest by an American, McBrooms time from today will be the new American Record.

In the 800 freestyle in Glasgow, McBroom won the event ahead of Pal Joensen who was second place at 7:39.69. Michael Klueh ran down Yannick Agnel for a third place finish in the last 100 meters of the race, touching the wall for 1 point with a time of 7:41.96.

McBroom now holds the American Records in the SCM and LCM 800 freestyles.

Agnel has not looked good…

I agree. And yet, he had well swum the weekend before in Baltimore like his training partner Conor Dwyer.
But unlike Conor Dwyer’s meet, Yannick Agnel’s overall meet in Glasgow has been disappointing.
I hope Mr Bowman will stabilize him on 2 distances in the future. He must give up his crazy idea of the triple 100 free/200 free/400 free. It’s absolutely impossible today to shine on these 3 events at the same time. It requires such different trainings. He must choose between 100 free/200 free or 200 free/400 free with my preference to the second option.

I agree.
Not everyone can be like Thorpe, who remains the only male swimmer ever to win medals in 100/200/400 in a single olympics.