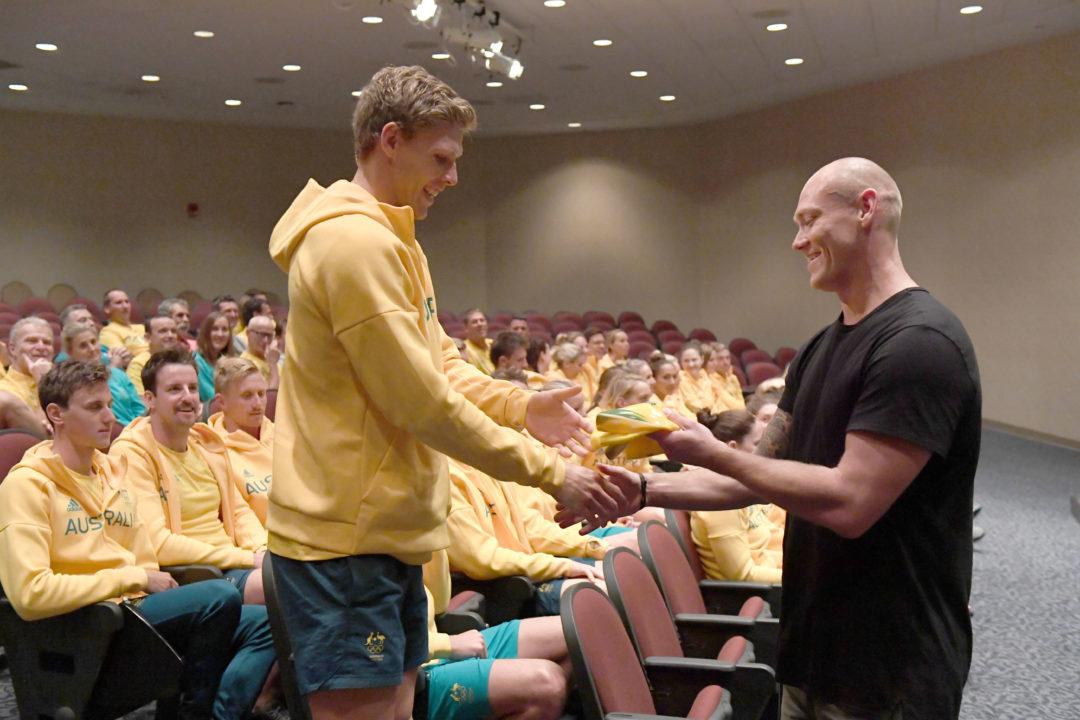 On the final night of the Australian Olympic Staging Camp three-time Olympian Michael Klim joined the team at the Auburn University Hotel Auditorium to help host the official Gold Cap Presentation, a tradition in Australian swimming.

The Australians watch a video of the 400 free from the 2004 Athens Olympics. Photo via Delly Carr / Swimming Australia Ltd.

meet, and the rookies are officially inducted into the team with the acceptance of a ‘Gold Cap Bag’ featuring their name and Swimmer Number embroidered on the front.

The Swimmer Numbers represent a select group of individuals that have represented Australia at a major international meet. Fred Lane (1900) was the first swimmer to receive a number (#1), and international rookies Georgia Bohl (764), Tamsin Cook (765), Jacob Hansford (766), Jack McLoughlin (767) and Joshua Palmer (768) all received theirs at the ceremony as the five new ones of 2016.

The Gold Cap Presentation is a way to celebrate Australia’s past and connect it to the present, and Klim

helped bring past learnings to the present. Klim, a six-time Olympic medalist including two gold, shared stories of success and also lessons learned as he spoke to the team about remaining in control, being confident and trusting your teammates.

The Australian now departs Auburn into Rio where they will familiarize themselves with the village and the competition and training pools.

This is NOT the Ozzie team that went to London…

Ah Michael Klim. You will be remembered for that 48.18 leadoff of the 400 free relay at the 2000 Sydney Olympic Games.