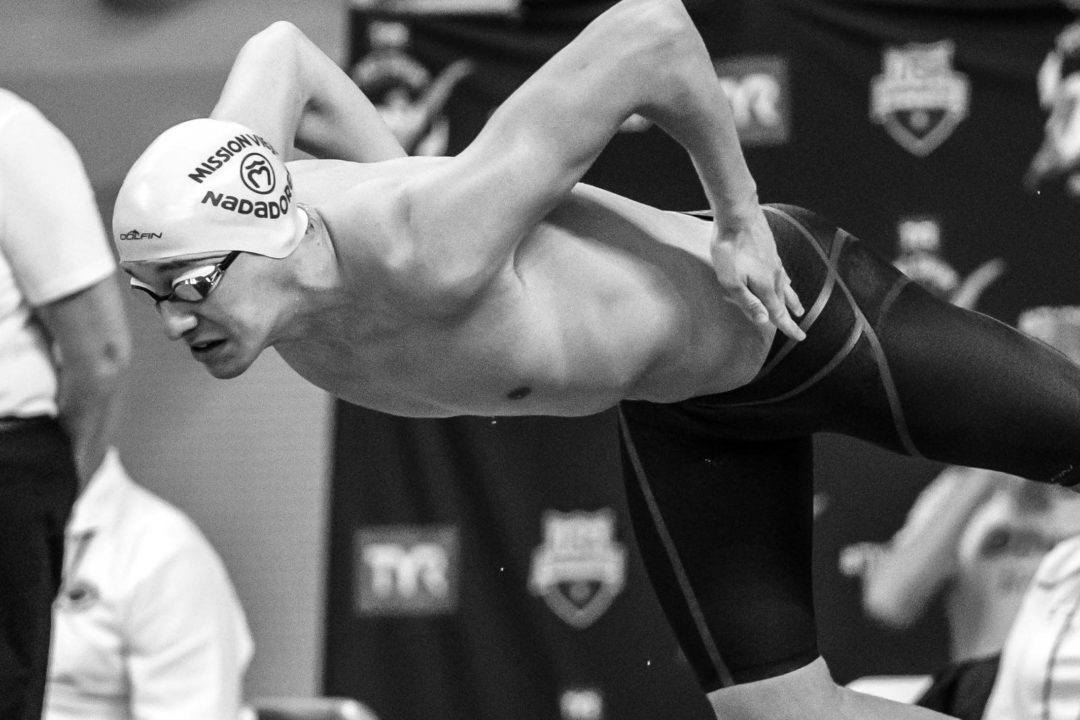 Brinegar has committed to Indiana University, and they will certainly be looking forward to getting him on campus-- his time is faster than the school record by almost thirteen seconds. Archive photo via Mike Lewis/Ola Vista Photography

The American Short Course Championships wrapped up yesterday, with more standout performances from teenagers and some last-chance swims from the NCAA men’s teams in attendance in Austin.

Mission Viejo Nadadores distance star Michael Brinegar dropped a huge time in the mile, winning by over 20 seconds with a time of 14:35.35. That is only his third time under 15 minutes– his first was a 14:53.52 from the Kevin B. Perry Senior Invitational in November of 2016, and his second was a 14:37.71 at the 2017 Speedo Winter Junior Championships – West in December.

In addition to being a best time, Brinegar now ranks third all-time in the 17-18 age group.

Zach Yeadon and PJ Ransford posted those times at the end of their freshman seasons, Yeadon at Notre Dame and Ransford at Michigan, though they were, of course, still 18 at the time of their swims. Robert Finke also posted his 4th-ranked time last month, and he’s still 18 through November.

Brinegar has committed to Indiana University, and they will certainly be looking forward to getting him on campus– his time is faster than the school record by almost thirteen seconds. His time would also rank 4th in the NCAA this season.

Future Longhorn Matthew Willenbring of Austin Swim Club was also impressive in the 100 free, going 43.22 to beat a field of NCAA swimmers. He now ranks 27th all-time in the 17-18 100 yard freestyle. His club teammate Quinn Schaedler swam to a win in the women’s 100 free with a time of 48.84, ranking her 23rd in 15-16 age group history.

He’s following in the footsteps of his mother. Just like her, he went out to California to swim with Mark Schubert at Golden West/Mission Viejo and then college at Indiana. His mother is the former Jennifer Hooker, who won golds on the 400 free relays in the 1976 Olympics and the 1978 Worlds, and then went on to break American records in the 1650. She had quite a range from the 100 free to the mile.

Three of the top 5 swims on the list came this year. They’re all with 3 seconds of each other.

The USA needs a new crop of distance swimmers to take the place of Jaeger.

Congrats on an excellent swim! Is PJ Ransford okay health wise? His last few years have been mediocre by his standards.

He swam a best time in the mile at NCAAs last year to finish 6th.

Based on the relative quality he has as the races get longer, I’d say he’d be a good candidate to take on open water after graduation.

Its going to be an interesting next 4 years with Finke at Florida, Abruzzo at Georgia and Brinegar at Indiana.

Yeadon will certainly be in the mix with that group. Fun times!

Wow that Jeff Kostoff was sure ahead of his time.

Interesting, he’s wearing the new Dolfin lightstrike suit… I wonder if other people might start wearing it too