Michael Andrew To Appear on ESPN’s Outside The Lines 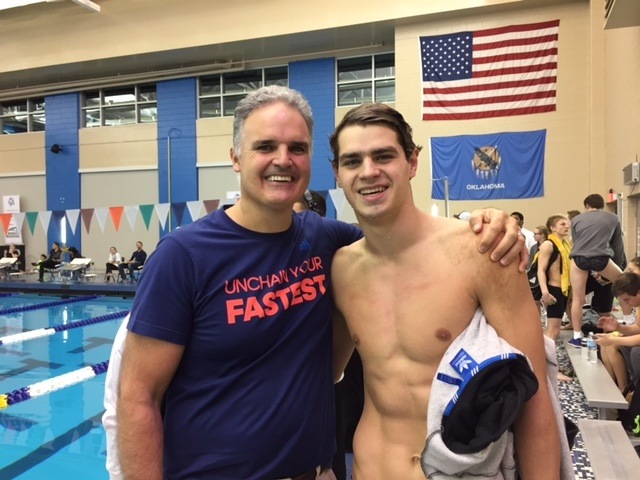 The dynamic duo that is swimmer Michael Andrew and his father/coach Peter Andrew are set to appear on ESPN2's Outside the Lines on Sunday. Archive photo via photo courtesy of Josh Davis

Eight months after being highlighted within an edition of ESPN The Magazine, U.S. National Team member Michael Andrew is set to appear on one of the sports network’s television shows. Michael, along with his father and coach, Peter Andrew, are slated to be the focus of this weekend’s episode of ‘Outside the Lines’, scheduled for 9am Eastern on January 3rd on ESPN2.

‘OTL’ is the ESPN network’s investigative-type sports show, which shares inspirational or sensational stories across the world of sports. This Sunday’s edition of ‘OTL’ will not only focus on Michael as the youngest American swimmer ever to turn professional, as well as his close relationship to his coaching father, Peter, but his entire training foundation will also be put under the microscope.

That foundation being the unconventional training method called Ultra Short Race Pace Training (USRPT), the science-based training philosophy rooted in specificity and purposeful training. The show will take a look at how and why Michael trains in this manner, examine his unique training environment which includes his custom-built backyard pool, as well as discuss the Andrew family’s hopes to revolutionize the sport of swimming.

Says Peter Andrew of the opportunity to be featured on ESPN’s OTL, “It was great working with ESPN Outside the Line’s entire production team and presenter Will Cain. Excited about the exposure for Doc Rushall’s tireless work on USRPT and how this can potentially impact swimming in the future.”

Son Michael agrees and says he  “Always appreciate an opportunity to share how we do things.  Looking forward to seeing the show.”

You can view a preview of Sunday’s episode here.

Great for our sport!

Yes indeed. USRPT and the LeBron of swimming at that. The last 2 OTL reports on swimming were not good looks at all. We’ve got to realize that these things play into how the mainstream views the sport. Who knows maybe one day it will be everyone sport as opposed to “ours”

The Lebron of swimming? Not really

The LeBron of swimming….

Well done ESPN! A little dismayed Mark Schubert wasn’t interviewed, but my heart will go on. That is the first visual of Michael Andrew’s home training pool. A couple things I noticed were the rings and a dry land station. He doesn’t have any training out of the water? Michael is a monstrous talent but the only jab I have is how isolated his training environment is. To have such a solitary setting can be mentally grueling in a different way. Swimming is an individual sport, but a big essence of it is the camaraderie of the group. Not having training mates to push him or the friendships to cope with the intensity and the grind are difficult things to… Read more »