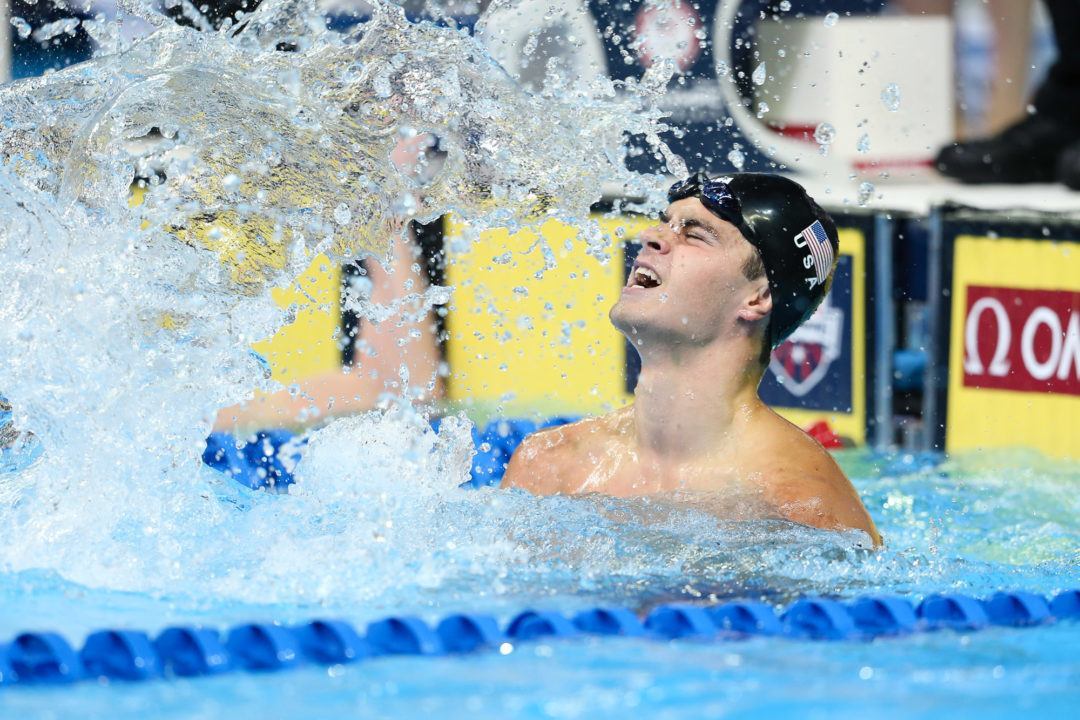 17-year old Michael Andrew continues to climb the ladder in his first of 5 entries at the 2016 U.S. Olympic Trials. He not only qualified 4th into the final of the men’s 100 meter breaststroke, but he re-broke his own National Age Group Record, previously set in the semi-finals.

Andrew’s 59.85 in the semi-finals on Sunday evening eclipsed the 59.96 that he swam in Sunday morning’s prelims session as the fastest ever done by an American 17-18.

Andrew’s record is faster than the latest recognized FINA Junior World Record, though not as fast as the 59.64 that Chinese 18-year old Wang Lizhuo swam in April of this year.

Andrew has now broken this record 4 times in his last 4 swims, including twice 2 weeks ago in the same pool at the Omaha Cup, the official test event for the facility.

Andrew, who is believed to be the youngest pro swimmer in history when he made the leap at age 14, now ranks as the 10th-fastest American of any age in the history of this event.

The top 8 who advanced to the final:

MA is the real deal. He proved it in the top swim meet of them all. To all the disbelievers, this guy will one day be one of our best Olympians ever. Whether you like or dislike USRPT, it works for him and he is just getting started. CONGRATS TEAM ANDREW!!

Proud of you and the dreams you have had since we were last together in Aberdeen, SD! Go Michael…praying for your success and God’s blessing! Hug your mom, dad, and Michaela for us!

He stays so low in the water, seeing him swim next to Whitley in prelims yesterday was like night and day.
Hope he can make one last time drop tonight to sneak in that 2nd spot! US needs youth now so they’ll have some experience in 2020 with no Phelps, Lochte, Grevers, Adrian, etc

I know Michael and am familiar with his training program. He works very, very hard. If you have followed his development you can see a tremendous improvement in his technique. He just turned 17 and is handling this pressure with his usual humility and class.

Congrats to MA!
Job well done so far.
A final, 2 best times under the minute a semifinal faster than the prelims.
Perfect so far.
A top 5 in final with another best time would be icing on the cake. His meet is already successful in my opinion.

It’s great that you have come around, Bobo.
Jump aboard, here’s your ticket to Michael Andrew’s bandwagon!

59.8. Does that mean we can keep talking about him? As in, will everyone who challenges his durability, level of performance, training program, improvement curve, etc, say he’s legit? Because he pretty much is.

That’s what I’ve said this whole time! He’s the real deal!!!! Michael Andrew is an amazing swimmer and I would be so stoked to see him make the team!

I could be super wrong on this, but how often do people wear “USA” caps at trials? I can’t think of many people.

Cordes and Miller are definitely the huge favorites going into tomorrow, but who knows.

He earned this cap by representing the US at the World Junior Championships. I’d wear it proudly too!

Oh yes yes, I knew he swam on that team. But I haven’t noticed any other national team members having done that.

Not that I’m against it, just kinda curious.

Are we even sure that photo was taken at this Trials? SwimSwam constantly uses OLD stock photos. For example, just today the picture for Conger has him in a Machine cap even though he’s been afiliated with NCAP for at least a year now. MA is a pro — I’m pretty sure he’d want to be promoting his USRPT brand and or his sponsors.

I strongly suspect that photo above is NOT from Trials.