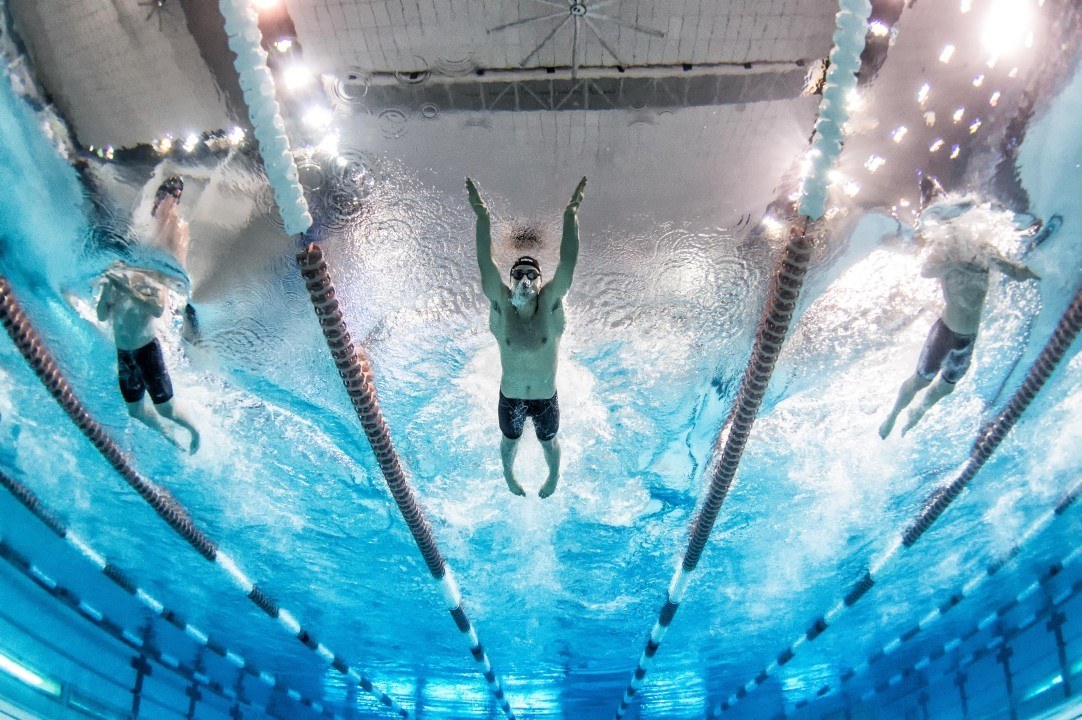 Michael Andrew moved up in the all-time 15-16 rankings in both the 200 IM and 50 free with his new lifetime bests from the Central Section Region VIII Championship Meet hosted by Columbia Swim Club. Stock photo via Mike Lewis/Ola Vista Photography

Michael Andrew of Indie Swimming picked up two more wins on Saturday evening, the final session of Columbia Sectionals. After a prelims swim of 2:03.71 in the 200 IM, his best time in 2015 by a full second, the 16-year-old dropped 2.6 to finish with 2:01.10. That moves Andrew to third on the all-time list for 15-16 boys, behind Andrew Seliskar (1:59.84) and Michael Phelps (2:00.86). With another nine months to go before he ages up, Andrew has plenty of time to erase the remaining 1.3 seconds needed to break the NAG record.

Andrew’s second win came in the 50 free, where he smoked the field by nearly half a second with a 22.63, his best by 2/10. As we noted here, he is now the second-fastest 16-year-old in history in this event, with only Caeleb Dressel’s 22.39 standing in the way of another Michael Andrew NAG record.

It’s a shame none of the women in the 50 free final hit the 2016 Trials mark, because everything else about the race was thrilling. Taryn Collura of Club Huskers won the splash-and-dash with 26.27. Just .03 back and tied for second place were Mizzou’s Danielle Barbiea and Greater Nebraska’s Olivia Calegan (26.30). Another .09 behind them were Bailey Grinter of Edwardsville YMCA and Rockwood Swim Club’s Lauren Votava, who tied for fourth with 26.39.

He seems to be hitting his stride now that he’s back home and training regularly again. The extended vacation to South Africa didn’t seem to do much for him.

On the contrary, I think that his trip to the family’s country must have been very important for him and probably a chance of changing his daily routine and learning new things.

Based on what? While he was over there swimming he didn’t put down anything close to a best time and for the first few month he was back he appeared to be struggling. I’m sure it was a great time for him personally, but I’m speaking specifically towards his swimming.

There’s more to life than swimming.

Those seem a little ambitious to me simply because he is never as broken down as his competition is through most of the year and seems to be able to do best times most any time during the year such as in this meet. I don’t know what the training regimen is for him at the end of the season, but I’m thinking he will not drop as much time if any as most others will.

He won’t break a 53 in the fly, but the others are obtainable.

Great predictions for Andrew . I agree with most of those besides the 50m free , I’m thinking more so 22.4 than 22.3 . I hope he swims the 200 Breast this summer as well to see how fast he can go , defiantly can’t beat Whitley but he can probably come second to him , with a 2:14 low and be the second fastest 15-16 in the events history