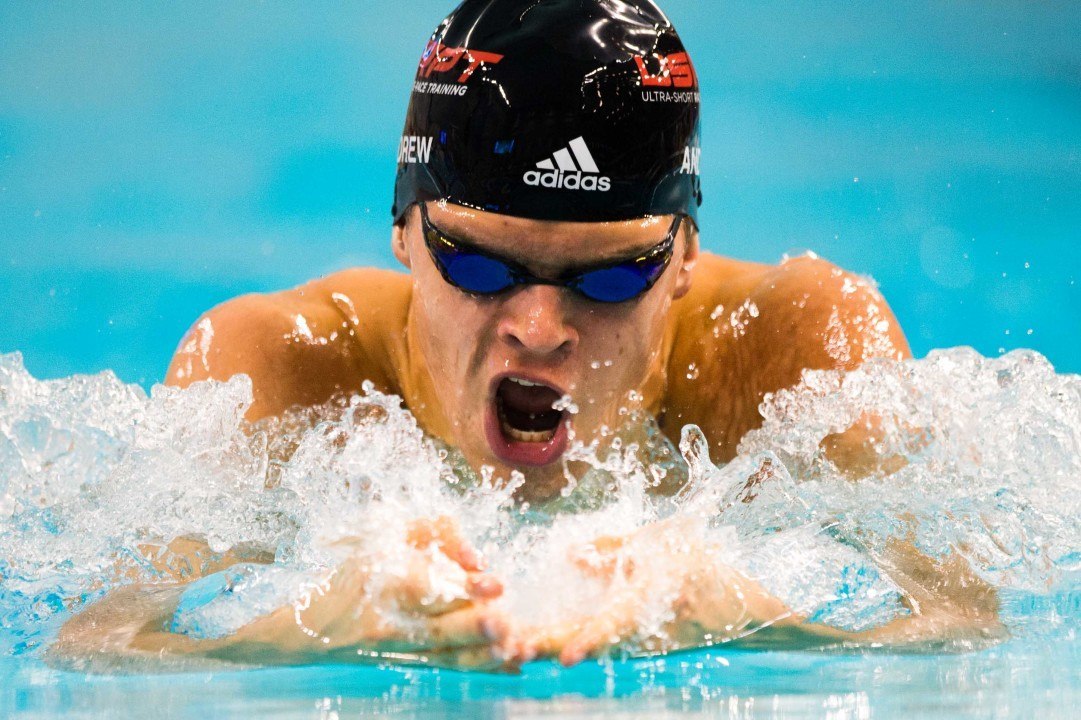 17-year old swimmer Michael Andrew has broken his own 17-18 National Age Group Record in the 100 long course meter breaststroke and become the youngest American swimmer in history to go faster than 1 minute in the event.

Andrew has now broken the 100 breaststroke record 3 times in the last two weeks. The record had been a Cordes-held 1:00.47, which Andrew improved twice at the Omaha Cup, and then by a much bigger margin on Sunday morning.

Also going through to the semi-final is 16-year old Reece Whitley, who swam next to Andrew and wound up qualifying 13th. The two, who have become linked as the young future of American breaststroking, embraced in the water after their swims.

The race was announced as a Junior World Record in the event, though Chinese swimmer Wang Lizhuo swam a 59.64 earlier this year that hasn’t been acknowledged by FINA. FINA’s most recent acknowledged record is a 1:00.12 done by Russian Anton Chupkov in 2015, that has been listed as “awaiting ratification.”

Great swim. He was also out alone a bit. Tonite he will be with others out in the 27s, so this will be his chance to really race the guys next to him on the last 50. He’s definitely in the mix. Great to see and congrats to him.

Nothing scares this kid. He’s not intimidated by anyone. With all the pressure that is placed on him to perform – he’s still able to do it….and yet…..”experts” continue to question his training methodology. Imagine if he could actually train with some other swimmers – versus by himself. There’s no telling what this kid could do.

It IS PHENOMENAL!
And he still has until December 31 next year to break and lower current JR WR (59.64)

Hopefully, he can even go faster tonight and perhaps if through to final, tomorrow night as well. But if not, it IS OK too. He’s just turned 17, there’s no one in the world younger than he is who is faster at swimming 100 breast. Do not let some anonymous internet commenter call it not ok just because he may not get into US OT final.

That is some speed… People question his training methods, but it’s working quite well for him I guess! Hope he has more left in the tank

It shouldn’t be. From somebody who cheated within the last 12 months I believe.

Wang Lizhuo also swam 59.79 last September. Not yet ratified. Chupkov’s 1:00 from August last year also not ratified.
FINA has a large backlog of record swims not ratified yet. Shameful.