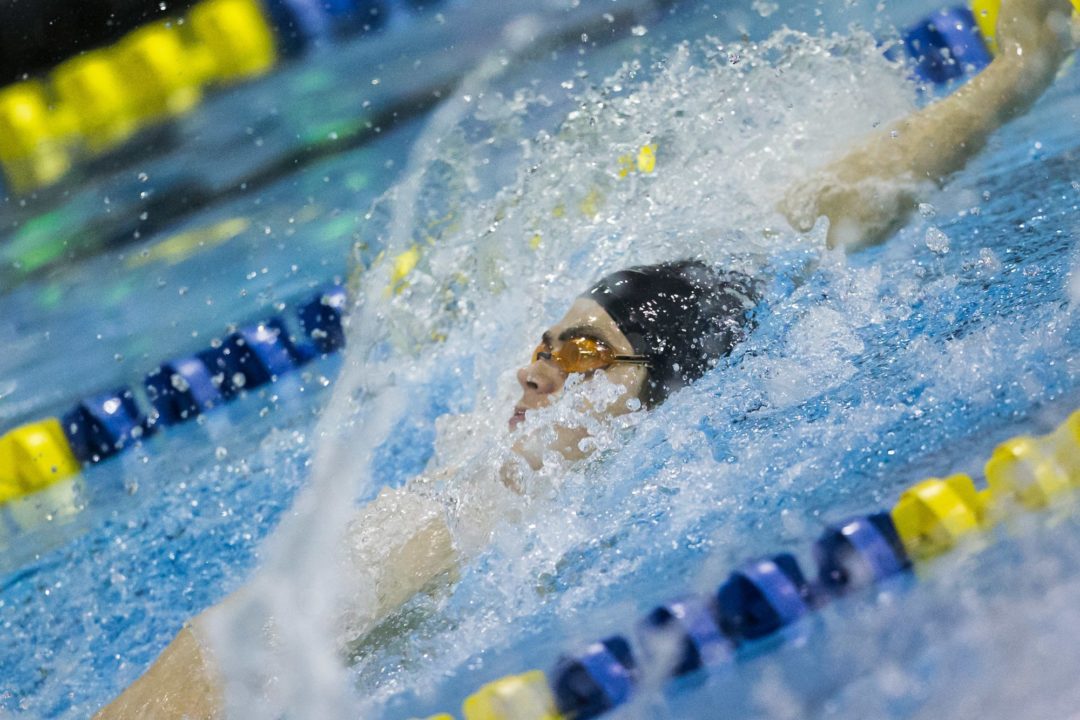 Summer McIntosh broke a U.S. Open and World Junior Record in the 400 IM on Friday. Next week, she will get a chance at her first yards races.

The great racing action continued in Irvine tonight; check out all A-final or fastest heat videos from Night 4 of the 2022 Junior National Championships.

14-year-old Raya Mellot of Crow Canyon leads the girl’s 200 breast field as the top qualifier out of this morning’s prelims.

Michael Andrew’s doubters and critics will always find a leg to stand on long-term, but on Friday night, they’ll be reaching for crutches. Andrew has broken his 3rd National Age Group Record in a single session of finals on Friday night at the 2013 Winter Junior National Championships.

Andrew was out in 23.58 and came back in 25.10 – another neat thing about this race is that he had identical 50 and 100 yard splits to Andrew Liang, with whom he tied for that 11th-place position.

Andrew now has his name on 12 National Age Group Records (though he’s broken plenty more than that, and some multiple times). One could argue if there’s been better 13-14’s, especially relative to era, but it would be hard to contest that there has ever been a more balanced, four-stroke, versatile 13-14 than Michael Andrew. He holds the NAG Records in 100 yards in backstroke, breaststroke, and butterfly, all broken in one night, and sits 6th in the 100 free, which he could improve upon on Saturday.

This was the only of the three NAG Records he broke today that he didn’t already own this morning.

The three finals all came within approximately one hour and 15 minutes of each other.

Of course USRPT works. It will take the majority a long
time, and there will always be coaches who will stick to
conditioning-based training, but just wait.

Agree with KP. Race pace works. I didn’t go those times till I was 25 years old and I could start to own my training and experiment. I was too tired in college from old school training. Hope more coaches join the USRPT revolution and learn how to swim faster…faster and have more fun. How cool to do best times off 45 min in the morning and 45 min at night. Great night in swimming history…Congrats Michael!!

Couldn’t agree more Josh. What a night! Keep up the great work Michael!

All these young MALE swimmers swimming so FAST is so exciting. The last time there were young male swimmers swam so fast were in 97/98 and 01/02.

Nevertheless, his records especially the 100 fly is STUNNING!

And we will see if he can sustain and translate his greateness to LCM and see how he does next year during US worlds/pan pacs trials.

Remember that at the age of 14, Thorpe was Pan Pacs silver medalist and Phelps was Olympics finalist.

I do not believe that is correct that Michael Phelps was an Olympic finalist at 14.

And by the time they were 15, both Phelps and Thorpe were world champions.

Right again.
Phelps was already past his 16 birthday by around 3 weeks when he became world champion in Fukuoka.

USRP training– BELIEVE IT PEOPLE!!! His body is trained to perform at a very high level multiple times in a short period of time. Three great races in 75 minutes. Could be a great advantage in international meets with prelims, semis & finals. (Not to mention relays too!)

I know Michael and coach Peter didn’t invent this training, but they are perfecting it, and have the courage to “swim against the current” of mainstream coaching techniques.

I don’t know about you guys, but I am constantly going to USA swimming and Swimswam saying “I wonder what he did this weekend!!!!” I hope he gets good opportunities to try all the 200s and even the 400IM!!! More records will surely fall.… Read more »

I think we should wait for him to get on old age.. to truly say he is really good at everything.. or is taking a lot of benefit from being an adult almost on the physical side..

Hating much? Sure he’s tall and pulls an advantage from it but even if you compare him to full grown men he’s really not far off. He’s not a giant 8 year old breaking those records, he’s 14 and he’s already relatively close to swimming like a college swimmer of pro. He’s within a few tenths of the 15-16 NAG record in the 100 fly also, by the time he turns 16 he could be within range of the high school record.

His time are getting to the point that they’re impressive for any age, not just 13-14 and it doesn’t matter how fast you grew early on if you can compete with anyone.

BTW..He came within 4/100ths of the 100y Free Nag tonight. I agree, he’s a 6’4″ 14 year old, but he’s now swimming times that are fast for any age as McGillRocks points out. Most of the elite swimmers these days are 6’3″ or taller and Andrew will fill out in the next couple of years which will help him as well.

As I commented before, I think that the stroke and i.m. are his forte.