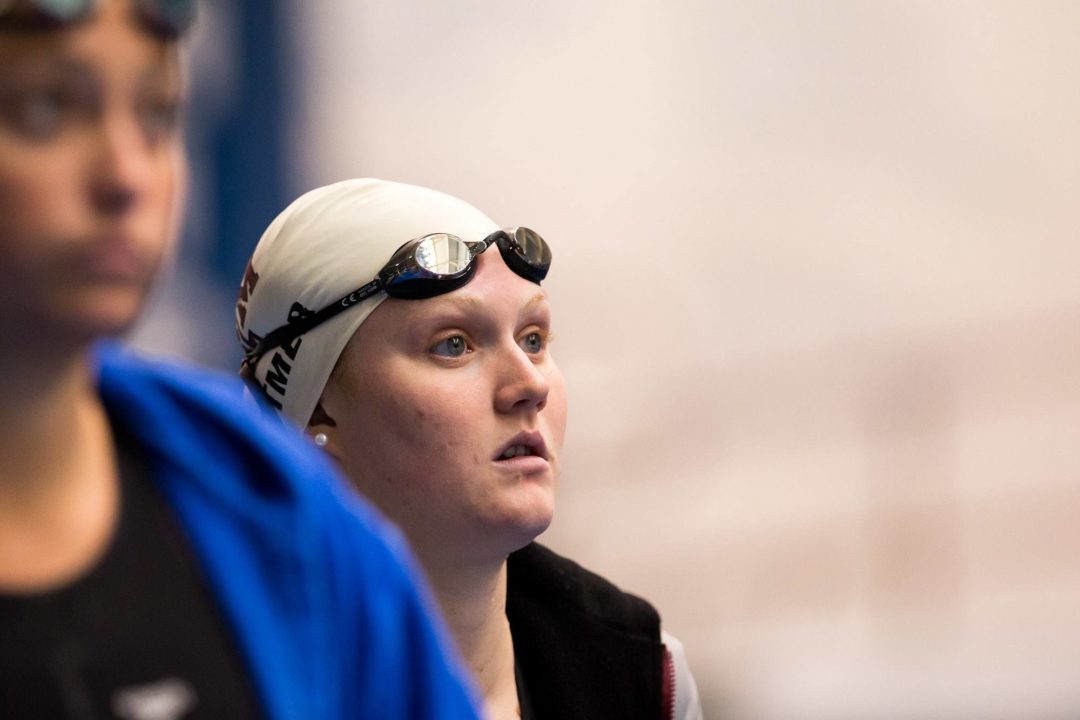 The Mexican Swimming Federation announced on Monday that they had named four swimmers to their World Championship roster after last week’s  National Olympic meet in Tijuana.

Among the four who have hit World Championship qualifying marks are a pair of Texas A&M Aggies: Erica Dittmer and Lili Ibanez.

Dittmer is American born, but her grandparents moved to Monterrey, Mexico a few years before her mother was born, so she garnered dual citizenship through her mother’s birthright. She qualified for Worlds in both the 50 breaststroke with a 32.46 (a new National Record) and in the 200 IM with a 2:16.43 (just .04 from her National Record): both times within the FINA B qualifying standards. She competed in the 200 IM at the 2012 Summer Olympics, and has finished 11th in the yards version at NCAA’s each of the last two years.

Note: Dittmer has been about half-a-second faster than her own National Record in the 200 IM, but it was from 2011 before she was officially representing Mexico.

The other Aggie, Ibanez, qualified in the 100 freestyle with a 55.93, which also clears the FINA B standard. That time is already just two-tenths off of what Ibanez went at last year’s Olympics.

Also on the team is Fernanda Gonzalez, who is becoming the star of the Mexican team. She  was prequalified based on her 1:01.28 and 23rd-place finish in the 100 backstrokeat last year’s Olympic Games.

The lone qualifier to date for the men’s team is David Oliver, who was a 29.37 in the 50 breaststroke to sneak half-a-second under the FINA B time.

Other notable results includes a 51.70 from Cal-bound Long Gutierrez in the 100 free, which breaks the meet record by just over a tenth of a second.  Gutierrez is another athlete who lives in the United States (Utah to be specific for high school) but represents Mexico internationally.

In total, 30 records (meet, national, age group) have already gone down through the course of two days. The meet runs through Thursday, and the federation is expecting to add several more qualifiers after sending a team of 9 to the Olympics.

It’s really funny how Erica dittmer swims for Mexico through her mother and grandparents who apparently have no ties themselves to Mexico. Is she even of Mexican descent? If she was born there, it wouldn’t be a problem. And if she has ancestry, I guess that’s cool too. But if there’s none of that, I chuckle.

Mexican ancestry? What does that mean? Should you have lineage going back to the Aztecs to be considered to be “Mexican”? There’s plenty of Mexicans that don’t have that kind of background because they are immigrants, not unlike the US.

Didn’t know a lot of her relatives were from mexico. I just think it’s an interesting how athletes who are american try to represent other countries. That’s all.

Well, if she has Mexican ancestry, that actually makes her of Mexican by blood. If she’s born there, it’s different like i said and she’s Mexican by birth. Apparently, she’s neither of these unless I’m mistaken and that’s the honestly the only way a US athlete should compete for another country. Not through her grandparents and mom who just moved there and apparently aren’t Mexican themselves. If her grandparents and mother are Mexican, then again it’s different because it’s by blood. Blood or birth. Pick your poison. America doesn’t really have a “blood lineage” because it’s a melting pot. But that’s my opinion.

The problem is that Mexico is a very diverse country and has many immigrant groups, including sizable Chinese and Japanese ethnic populations, and there are many different ethnic Mexican groups. In addition, there are large groups of immigrant groups from Spain, other European countries, and other Latin American countries. Mexico is much more of a melting pot than you think. Moreover, Mexican nationality can be obtained by being born in the country, regardless of ethnicity, just like in the U.S. So this is not a matter of opinion, it’s a matter of facts.

I agree with everything you said. but she wasn’t born there. Her mother was. I guess that’s enough based on rules. Just like missy franklin has dual canadian citizenship.

And she’s not an immigrant. So I don’t know what you’re attempting to argue haha. She was born in the US. Her parents/grandparents are immigrants. So she gets to be too? Even though she’s not?

From the article it appears that her mother was born in Mexico, and is therefore a Mexican citizen. So she can also claim Mexican citizenship. This would also be true for the US.