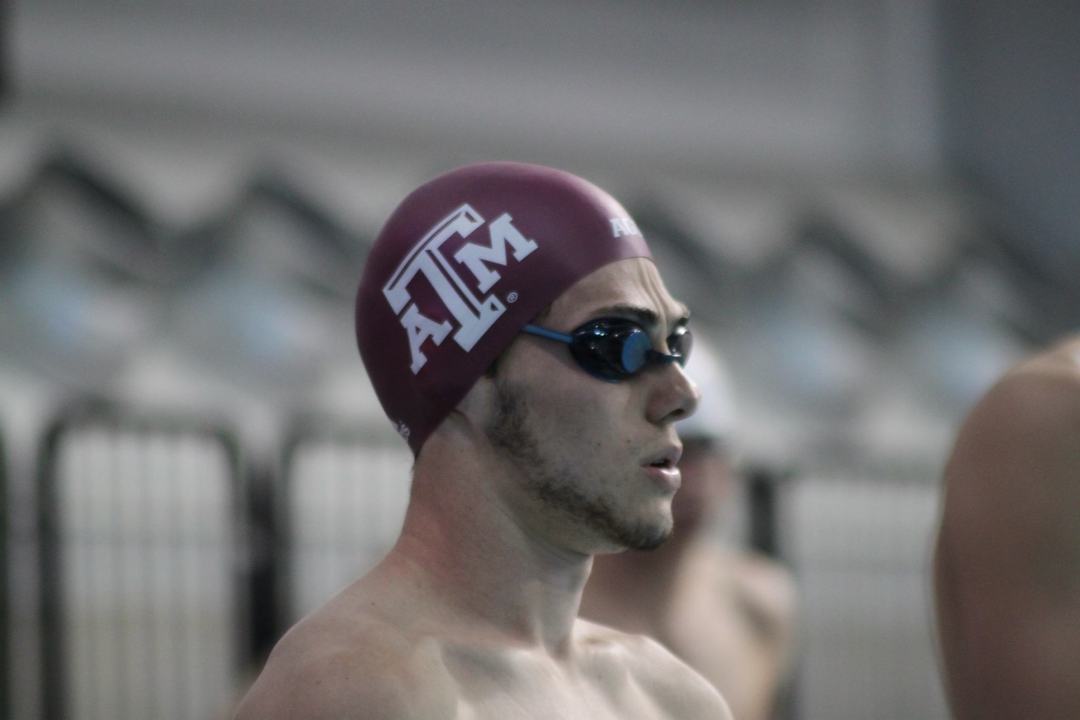 Kyle Hendricks and the men of Texas A&M improved to 3-1 on the year after a victory at Indian River State College, the NJCAA national champions 40 years in a row. The FIU women beat the Indian River women to improve to 3-0. Archive photo via Andy Ringgold

The Texas A&M men and Florida International women made the trip to Indian River State College to take on the defending NJCAA national champion Pioneers on Saturday.

Ryan Mallam, an associate head coach for A&M, made the jump to division one coaching last year after a successful head coaching stint at Indian River, making this meet more that much more interesting.

On the Men’s side, Texas A&M jumped out in front early, winning the 200 medley relay with a 1:32.52 performance from the team of Alexandros Theocharidis, Mauro Castillo Luna, Justin Morey, and Jacob Gonzales, who went 20.25 to anchor the relay. Morey had a solid spit of 22.32 as well. The Indian River team of Stefan Stojmenovic, Craig Emslie, Shota Nakano, and Erle Craven, took second with a time of 1:34.21.

A&M continued to put up strong showings, next in the 200 free. Antoine Marc finished first with a 1:41.23, and Mateo Muzek came in not far behind at 1:42.71 to make two straight first and second place finishes for the Aggies. Quinn Poti was third for Indian River with a  1:44.58.

Hayden Duplechain ran away with the 200 fly for the Aggies, swimming a 1:53.02 en route to a convincing win over Indian River’s Brandon Thoman. Thoman was second in 1:56.00, and Kyle Hendricks was third for the Aggies in 1:56.20.

A&M then continued rolling with a sweep in the 50 free. Gonzales, only a freshman, swam 20.57 to take first, while his teammates Cory Bolleter and Morey were 20.69 and 21.46 to take second and third. Indian River’s Danny Hartley and A&M’s Mulleady tied for fourth in 22.31.

Gonzales then doubled up with a solid win in the 100 free. Gonzales beat Indian River’s Emslie 45.56 to 46.91. Emslie and A&M’s Luke Shaw tied for second.

Theocharidis took home his second win of the evening with an almost three second victory in the 200 back. Theocharidis beat his teammate Bonetti 1:51.51 to 1:54.33. Another Aggie, Cameron Kerr, was not far out of second, finishing in 1:54.54.

The Aggies had some weakness exposed in the 200 breast, although their best 200 breastroker so far this season, Mauro Luna Castillo, who has been in the 2:05 range and would have won the heat, did not swim the event. Indian River got their first win of the meet from Craven, who won in 2:07.31. Nakano was second in 2:08.11 for Indian River. Hayden Duplechain was third for the Aggies with a 2:10.67.

Then, Indian River got their second win of the day in the 100 fly. Stojmenovic touched first with a 50.96, but A&M responded with a second place finish from Turker Ayar in 51.56, a third place from Castillo Luna In 51.89, and a fourth place from Morey in 51.94.

The team of Jacob Gonzales, Justin Morey, Cory Bolleter, and Luke Shaw won the 400 free relay for A&M in 3:05.80. Gonzales had the fastest split in 45.60 from the leadoff leg.

The women’s half of the meet was a bit closer than the men’s.

Indian River scored a key double in the sprint freestyles from Barbara Caraballo. Caraballo was 24.02 in the 50 free, beating the FIU trio of Paulina Zelazna, who was second in 24.79, Klara Andersson, third in 24.89, and Ally Mayhew, fourth in 24.94.

Indian River also won the 200 medley relay. Caraballo, Christina Loh, Tayla Lovemore, and Lee, touched in 1:44.71, way ahead of FIU’s second place B relay. Silvia Scalia, Jess Chadwick, Zelazna, and Klara Anderson, made up that relay and finished with a 1:46.46.

Skye Carey, Johanna Gustafsdottir, and Becky Wilde completed FIU’s second sweep in as many events with their 200 free performance. Carey was 1:54.95, Gustafsdottir was a close second in 1:54.97, and Wilde was third in 1:56.63.

After the sprint freestyles, Scalia got her second win of the night, blowing out the field in the 200 back. Scalia, of FIU, was 2:02.08 to dominate her teammate, Gustafsdottir, who was second in 2:08.33.

Gustafsdottir, an Icelandic junior national team member, won the 200 IM by a six second margin. She was 2:09.05, well ahead of her teammate Chadwick. Chadwick finished in 2:15.26 while Jean completed the sweep in 2:16.03.

The 400 free relay was a close finish. Lovemore, Caraballo, Leah Sims, and Lee won the relay for Indian River, with a 3:33.02. Caraballo had the fastest split on the relay with a 51.56. Fiu’s A was not far behind, but did not have the speed to match Carabollo. Zelazna, Fant, Carey, and Klara Andersson were second with a 3:33.21.

Jacob Gonzales is a sophomore.