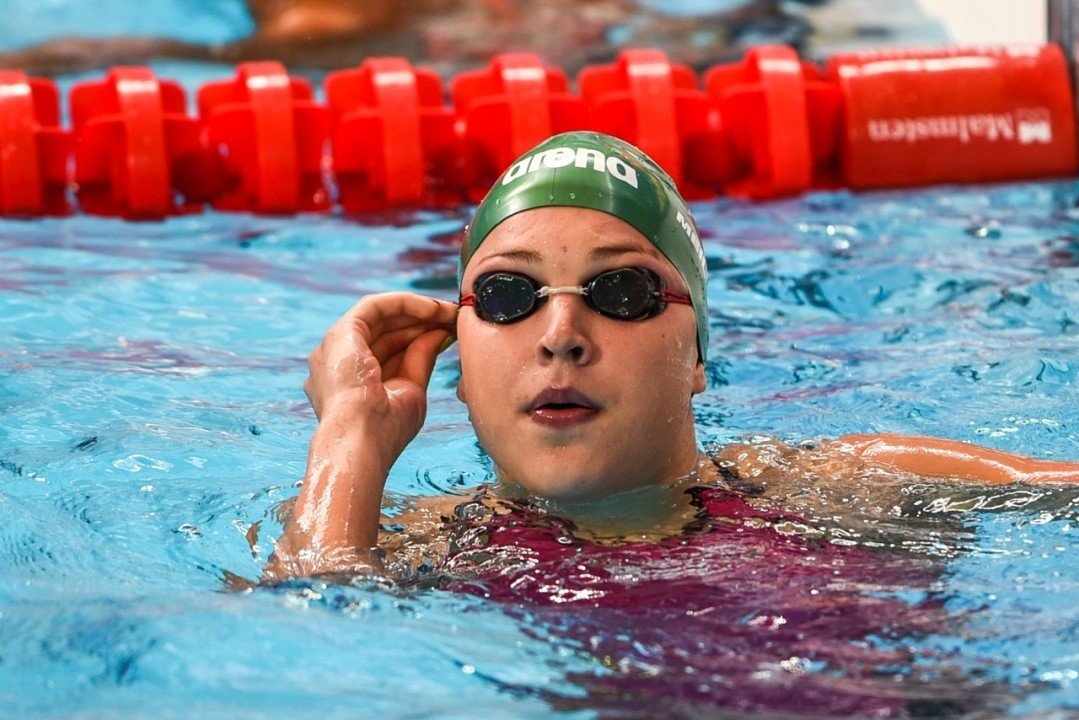 Adam Peaty considers himself to be in ‘one of the best shapes he’s ever been in’ headed toward British Trials.

Ben Proud is giddy with his 100m freestyle personal best, but certainly uses the word ‘hurt’ a lot in his post-race interview in Edinburgh.

The Edinburgh International meet wrapped up today with wins by Danish swimmer Mie Neilsen, and British swimmers Chris Walker-Hebborn and Aimee Willmott, among several others.

Today kicked off the 2016 Edinburgh International Swim Meet, where some of Britain’s best are putting the finishing touches on their race-tuning before their Trials in April. Additional key European athletes are also sprinkled into the mix of events on both the women’s and men’s sides to give us some terrific match-ups.

Lithuania’s Ruta Meilutyte traveled to Edinburgh with her Plymouth Leander teammates, making her post-broken elbow racing debut. Suffering the mishap last September, Meilutyte was first scheduled to swim at the Euro Meet in Luxembourg in January, but pulled out before competition began.

The extra rest proved potent for the 18-year-old, as Meilutyte threw down a monster 1:05.82 to easily take the women’s 100 breaststroke event. Splitting 30.40/35.42, the 2015 World Championship silver medalist topped the field by almost 2 seconds en route to clocking the world’s 2nd-fastest time of the season. Only Russia’s Yuliya Efimova has been faster (1:05.70) and the two European women represent the only sub-1:06 breaststrokers of 2016.

For Meilutyte, the outing points to what looks like a full recovery, as the 1:05.82 time is among her fastest of the past two years. Post-race, Meilutyte noted, “Representing Lithuania, I don’t have Trials but I know how important April is to my [Plymouth Leander] teammates.” She will also be contesting the women’s 50m breaststroke event later this meet.

University of Bath’s Siobhan-Marie O’Connor scored a successful 200m IM swim today, registering a time of 2:10.32 to take the gold and beat the field by almost a second. For O’Connor, her swim now sits as the 3rd-fastest time in the world this season and, although Hungary’s Katinka Hosszu has positioned herself as a heavy podium favorite headed into Rio, O’Connor’s consistency warrants adding the 21-year-old to the conversation as well.

O’Connor’s personal best in the event is the 2:08.21 she earned en route to gold at the 2014 Commonwealth Games and she followed that up with an impressive bronze medal in Kazan with her mark of 2:08.77.  With only Australia’s Alicia Coutts joining Hosszu as the only sub-2:10 swimmers of the season, O’Connor just needs to hit a good swim come British Trials to potentially set herself up for a podium-worthy swim in Rio.

O’Connor doubled up on her 200m IM victory by finishing first in the 100m butterfly, stopping the clock at 58.79, a time that ranks as the Bath swimmer’s 10th best of her career.

Proud’s result today clocks a personal best for the 22-year-old, representing just the 4th time he’s dipped beneath the 49-second threshold. 48.20 is the British National Record in the event, held by Simon Burnett since 2008’s Beijing Games. With Proud’s upward trajectory, the Plymouth Leander athlete is inching closer and closer, now just .32 of a seconds away.

After his race, Proud said “I really didn’t expect to be so tough or so fast.” Proud’s time sits just outside the world’s top 10, but justifies the Brit as ‘one to watch’ in the event, as he improves in both the 50m and the 100m virtually every time he swims.

Cool to see Meilutyte healthy again.
Very interesting time of 1.05.82.
I didn’t know what to expect after her injury problems.
It shows she will be competitive in Rio. At least for the podium.
I think she wants at any price prevent Efimova from winning the gold. 🙂

Great 100 free by Proud. He becomes more and more solid in that event and it’s good for the British medley relay too. Maybe fully tapered he can break the 48-second barrier in the next weeks. The minimum to expect an olympic final.

Very pedestrian 25.65 by Ranomi! 😆
She has done the bare minimum to win that race.

The 50s are skins races, for some reason the results page only has the 1st round for some reason, but Kromowidjojo swam a 24.8 in the final round (amazing considering she had just swum 4 50s under 26 second in the space of 15 minutes).

I would also add that Aimee Willmott looked very sharp in the 200im looking forward to the 400 on sunday, Hannah Miley less so…