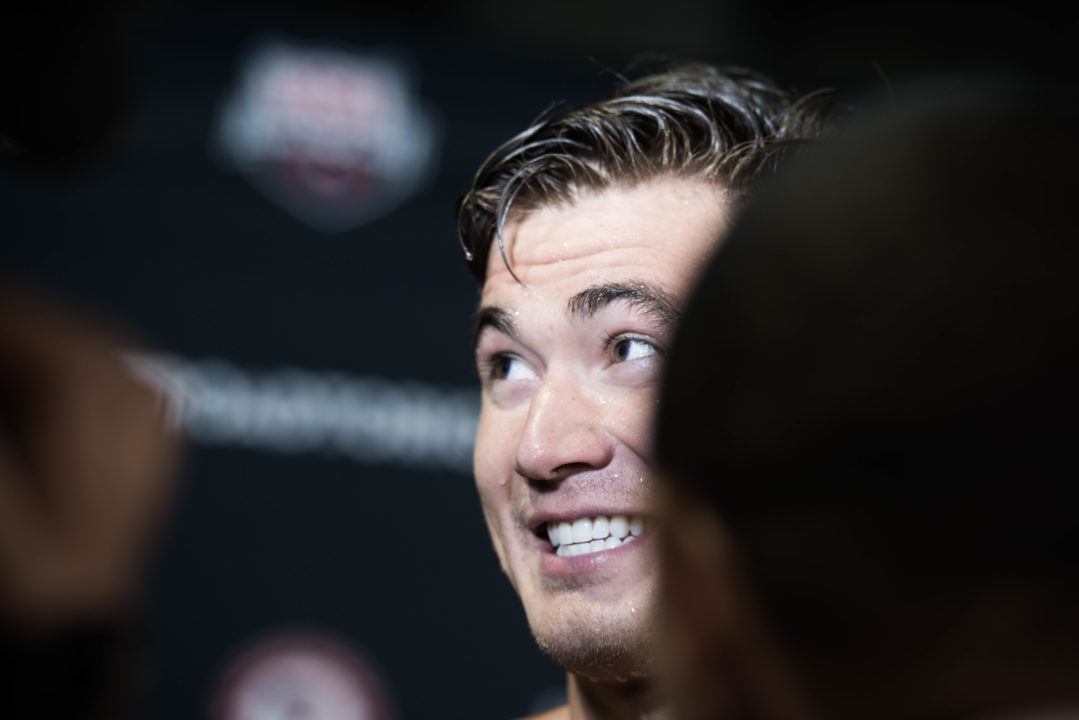 Meet 2016 U.S. Olympian Nathan Adrian, a native of Bremerton, Washington, who next week will be competing in his third Olympic... Archive photo via Mike Lewis/Ola Vista Photography

Ron Aitken (above), second from right) coaches 3 swimmers who qualified for the US Olympic women’s swimming team over the last 8 days.

Meet 2016 U.S. Olympian Nathan Adrian, a native of Bremerton, Washington, who next week will be competing in his third Olympic Games. Adrian has 4 career Olympic medals -three of which are gold, including the 100 free from the 2012 Olympic Games. In Rio, he’ll swim the 50 free and 100 free individually, plus the 400 free relay. In this video, Adrian talks about how what he’s learned from swimming and how he applies those lessons to his everyday life.

He also references his infamous 2012 suit rip (which at the time shut SwimSwam down for 12 hours because of the influx of traffic).

Adrian is one of the captains of the 2016 U.S. Olympic Team.

Nathan Adrian
Nathan Adrian is a U.S. sprinter, born in Washington state as the youngest of three kids. Born Dec. 7, 1988 Adrian began swimming because his older siblings were involved — he began taking lessons by 2 and joined the team by 5, but years later the 6’6″ freestyler would become one of the top sprinters in the world.

Personal life
Adrian was born to a Nuclear Engineer and a Nurse — his mother, Cecilia, is Chinese, and was born and raised in Hong Kong. Family is an important part of Adrian’s life since they have supported him from the beginning. During his first Olympic Games in 2012, Adrian’s entire family was on the sideline. His two siblings were also swimmers — brother, Justin, swam for Washington State and sister, Donella, swam for Arizona State.

Adrian is arguably the most humble and consistently competitive male athlete in the sport. In-season or at a championship, the guy just knows how get his hand on the wall first. If anyone can upset McEvoy in the 100, I hope it’s him.

Yes I am hoping for him to pull that win I know Nathan can do it and become the third ever back to back 100 free champion. So what if macevoy can go 47.04 the missile went 47.10 but still fell to Adrian. As for the 50 I want Adrian to win but that 21.19 from manadou and him breaking the scm world record makes me worry.

I assume he’s also swimming the medley relay? Go Nathan! And it still cracks me up that he caused SwimSwam to shut down because his suit split.