Medhy Metella Breaks French Record in 100 Fly: One of 4 on Thursday 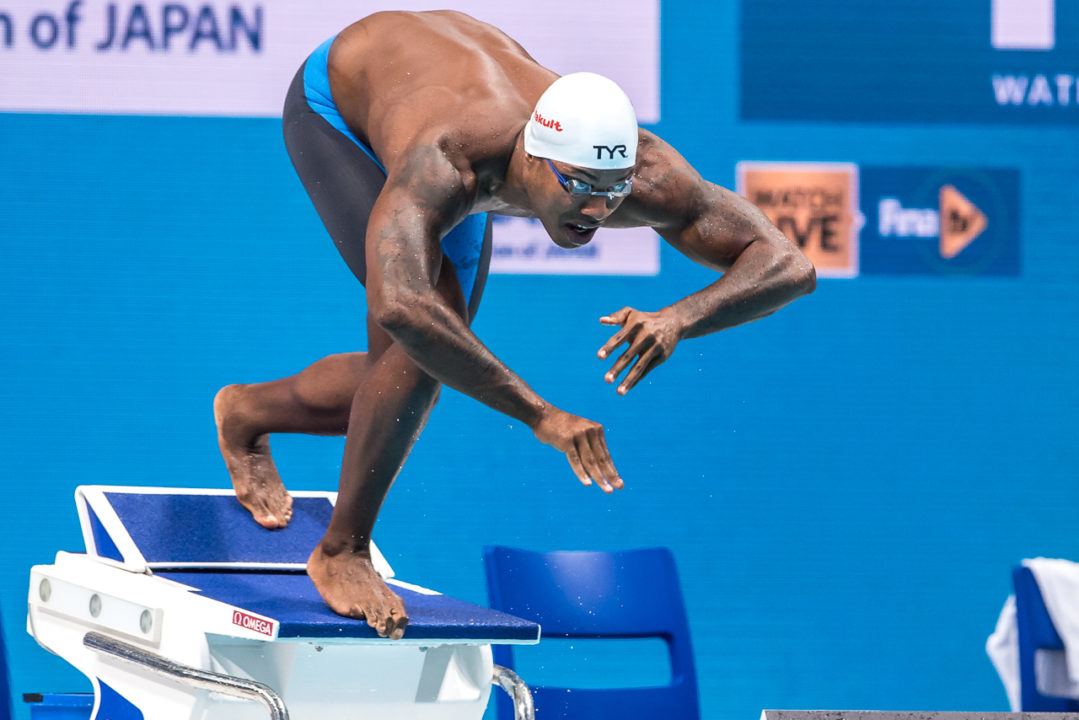 France's Medhy Metella easily broke his own French Record in the 100 fly, but still said he's hoping for more at the World Championships. Archive photo via Peter Sukenik/www.petersukenik.com

The first came in the very first A-final of the meet, the men’s 100 fly, where established star Mehdy Metella swam a 49.58. That cleared his own record of 49.71 set 6 weeks ago at the Budapest stop of the FINA World Cup Series, which in turn made him the first Frenchman under 50 seconds in the event. The former record holder, Jeremy Stravius, took 2nd on Thursday in 50.40 – slower than his best of 50.04.

The difference this season for Metella has been less about his speed and more about his finishing ability as he’s knocked a grand total of 6-tenths from his previous lifetime best. On Thursday, he opened in 23.55, which was two-tenths slower than he opened in Budapest. He closed in 26.03 though, which is his best-ever closing split by a third-of-a-second (and half-a-second better than any closing outside of Budapest).

“I did not have good times last week at the (Interclub Championships), but I’m happy to make up for that today at the French Championships,” Metella said of his record. “I’m tired, this morning I swam the 100 fly and the 400 free. I am here to work my preparations for the World Championships in a few weeks when I’m aiming for an individual medal. I’m having a good performance, but a 49.5, I’m not sure it will make a podium at the World Championships.”

Metella confessed to have missed his taper (and subsequently the podium) at this summer’s European Championships.

The 2nd record was also established by a well-known quantity, albeit in a lesser-known discipline. Freestyle specialist Charlotte Bonnet swam the 50 breaststroke and became the first-ever French woman under 30 seconds, touching in 29.98.

Bonnet holds, or shares via a relay, 12 French swimming records. One of them is the 100 IM in SCM, 10 of them are in freestyle events, and the other is this short course meters 50 breaststroke. The old record of 30.34 also belonged to her, done at this same meet last year.

Bonnet would later win the 100 free in 52.00, which she was satisfied, but less outwardly happy, with.

“In the 50 breaststroke I set myself the goal of going under 30 seconds and I’m very happy that it happened tonight,” Bonnet said. “In the 100 free, it was harder, I clearly lack training but I am still satisfied with my time. A 52.00 isn’t bad; it’s better than last year at the same time (52.04). I had a lot of motivation when I started again in September, that’s why I managed to make good times today.”

The other two records went to lesser-known swimmers, or at least previously lesser-known swimmers. In the women’s 50 back, Mathilde Cini swam a 26.46 to not only beat Beryl Gastaldello (26.64) and Melanie Henique (26.75). Henique is the 2nd-fastest Frenchwoman in the history of the event and the 2016 French champion, though Cini has now beaten her in each of the last two years. Cini held the prior record in 26.47, .01 slower than what she swam on Thursday, from the 2017 European SC Championships. Gastaldello had broken the Championship Record in prelims with 27.02.

The 4th and final record of the day came in the women’s 200 IM. There, Fantine Lesaffre won in 2:07.67, blowing away the competition by over 2 seconds. The swim shaved .02 seconds off the record held by the late French legend Camille Muffat, who swam 2:07.69 at the 2009 European Championships.