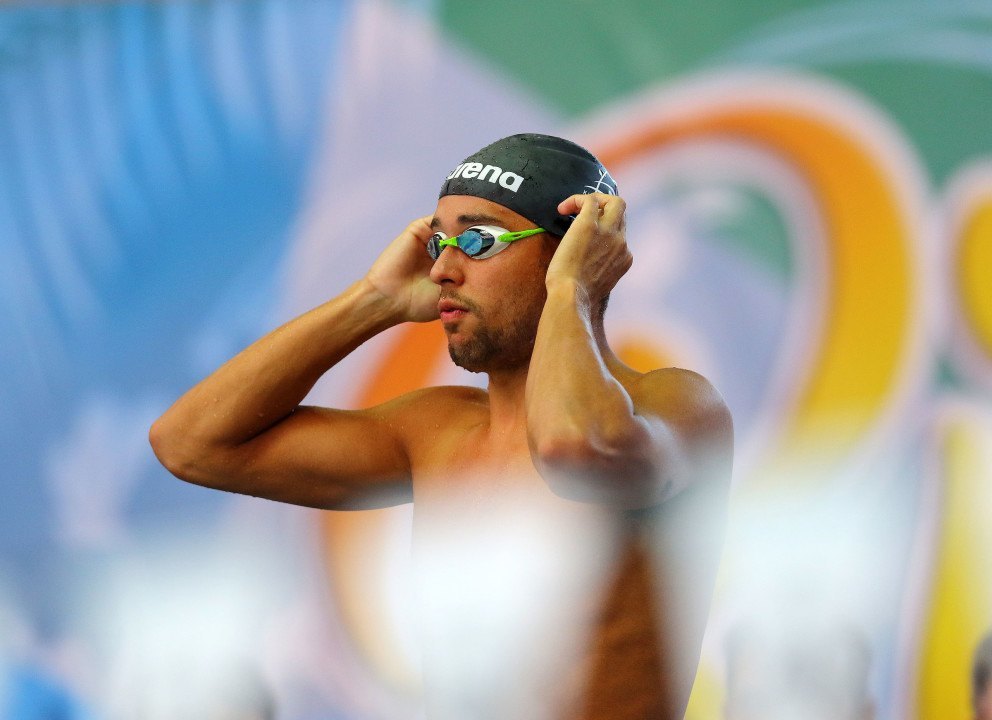 While American swimmer Tom Shields was in Atlanta at the U.S. Winter National Championships, becoming the first man to ever break... Archive photo via Anesh Debiky/Swim SA

While American swimmer Tom Shields was in Atlanta at the U.S. Winter National Championships, becoming the first man to ever break 44 seconds in a 100 yard butterfly, South African Chad le Clos was swimming a 100 yard fly of his own in Connecticut.

Arriving in North America in anticipation of the 2016 Short Course World Swimming Championships, which will take place just across the border in Windsor, Canada, Le Clos and his brother Jordan landed at JFK Airport and drove to the Westport Weston Family YMCA to loosen up before making the final trip to Windsor.

Le Clos spent a few days training at the pool and as a thank you to the Water Rat Swim Team on Friday evening swam an exhibition 100 yard butterfly at the Strittmatter Family Aquatic Center – believed to be his first ever race in a yards pool.

In front of a full house, Le Clos clocked a 44.25 in the 100 yard fly, which at 5:15 Eastern Time when the swim happened would count as the third-fastest 100 yard fly ever swum (we’ve been unable to confirm if the swim was officiated or will be a recorded time).

Shortly thereafter, of course, American Tom Shields became the first-ever swimmer to go faster than 44 seconds in the 100 yard fly when he posted a 43.84 in Atlanta. That broke the old record of 44.01 done at last year’s NCAA Championships by Joseph Schooling. That swim relegated Le Clos’ record to just the 4th-fastest ever.

In either case, the pair of performances will build a lot of anticipation for the race in Windsor next week at a meet that could use a little drama without many of the world’s top swimming stars.

Below, check out the video evidence, courtesy of Wayne Ridden.

LeClos is good for swimming. What a thrill for all those kids to see that!

Once a WRAT always a WRAT
You’re still part of the family!

Maybe the race of the meet next week on the men’s side.
The world record is in serious jeopardy.

Goggles around the neck?

This LeClos kid is ok. He might be able to make NCAA finals.

That’s pretty cool all those little YMCA kids got to see that up close.