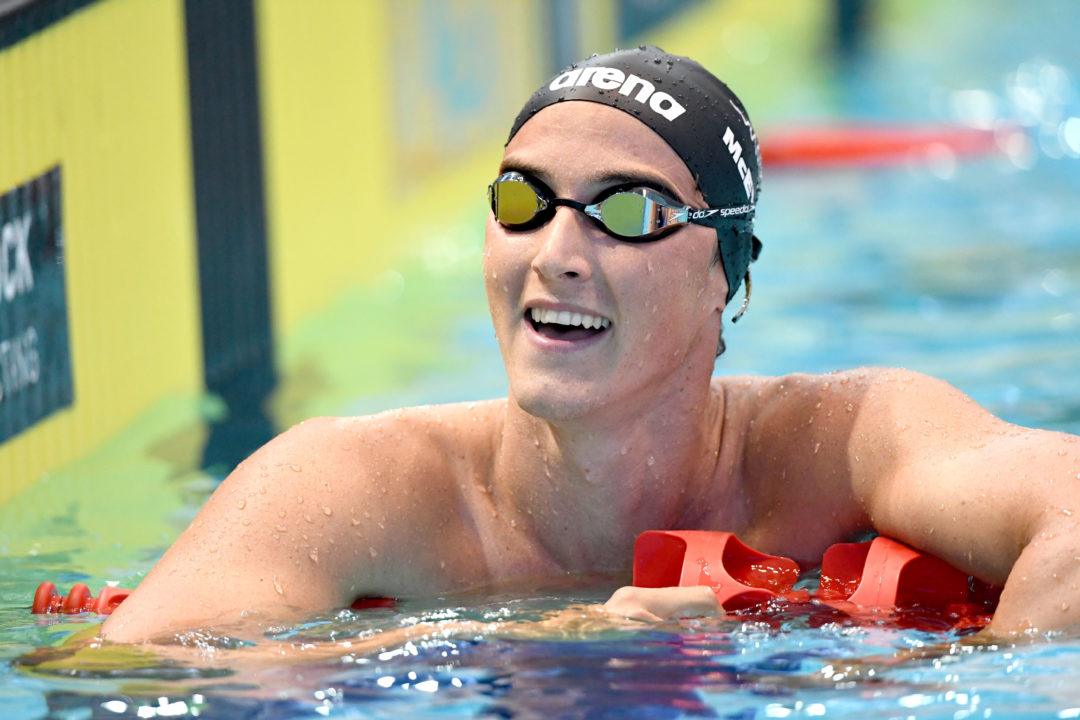 Day 1 of the 2020 Vic Open is done and dusted with Cameron McEvoy, Jack McLoughlin and Jess Hansen among the gold medalists. Archive photo via Swimming Australia/Delly Carr

The 2020 Victorian Open Championships kicked off today in Melbourne, with 64 events ready to be contested through Sunday, February 16th. As with the 2019 edition of the meet, this year’s affair will be incorporating the Melbourne 2020 World Para Swimming World Series event.

Although the start lists included elite competitors to the tune of Mack Horton, Cameron McEvoy and Jess Hansen, the meet is merely a stepping stone along the path to Olympic qualification. The Australian National Championships are still about two months away, with the actual Olympic Trials taking place in June.

As such, the times here at the Vic Open were on the modest side, as to be expected with swimmers under heavy training and not particularly rested for this meet.

McLoughlin owns a lifetime best of 3:44.20 in the event, a time he logged at the 2018 Pan Pacific Championships. Horton took gold in Rio after touching in 3:41.55, just to put tonight’s low-key times in perspective.

McEvoy’s 400m free appearance served as a good warm-up for his 100m free appearance later in the meet, where the 25-year-old represented just 1 of 2 swimmers under the 50-second threshold in the race. The TSS Aquatics athlete touched in 49.65, with Bobby Hurley-trained William Yang putting up a time of 49.72, good enough for runner-up status.

Not to be overlooked was visiting British teenager Jacob Whittle, who stood his ground as the youngest competitor in tonight’s 100m free final by 5 years. Whittle, the world’s fastest 100m freestyler ever as a 14-year-old, touched in a time of 50.23 tonight for 4th.

Several New Zealanders were in the water tonight, with Helena Gasson taking the women’s 50m fly in 26.92, as well as silver in the 400m IM in 4:46.76. Topping that women’s long IM was Czech veteran Barbora Zavadova, who clocked 4:44.43 to comfortably clear the field.

Gasson’s teammate Erika Fairweather, the reigning 200m freestyle World Junior Champion, made some waves in the women’s 100m free tonight. The 16-year-old produced a winning effort of 55.98 to come within .23 of the New Zealand national age record in the event. That mark stands at the 55.75 that’s been on the books for 2 years.

Fairweather’s swim tonight ranks as the 4th fastest time of her career, one which boasts a personal best of 55.60 in this 100m free event.

Additional Aussies collecting hardware to start the Vic Open included Zac Stubblety-Cook‘s victory in the 50m breast in 28.19, while Hansen got it done for gold in the women’s 100m breast in 1:07.74.

Andrew Jeffcoat was another winner for New Zealand, taking the 50m back in 25.83.

A delighted Hall said he was pleased with his swim post-race.

“I’m really happy with the time, it’s the fastest I’ve swum in the last 18 months, so I’m really stoked with that,” he said.

“I went back to the drawing board and worked out some new strategies and had a look at what was going to work and what wasn’t going to work and thankfully it’s all starting to come together. It’s the start of the year and I’ve got a few good solid months to go, so I’m looking forward to seeing what those new tricks bring.”

Striving to record a competitive time, Thomas Kane said she was happy with her performance in what was such a tight race.

“It was a good race, a tough race and I was only two points from getting gold, so I’m happy with the time, but it’s always close with these 50-metre races,” she said.

“It’s really good to see some competitors I’ll be racing later on in Tokyo hopefully, so seeing how their times are going and how they’re progressing will give me some good hints for my time.”

Auburn’s Timothy Hodge (S9) improved on his Series performance from 2019, jumping from second place to the coveted top of the podium in the Men’s 100m Butterfly Multi-Class. Clocking 1:01.77 and amassing 867 points, Hodge beat out fellow Dolphins Braedan Jason (S12) from USC Spartans and Victorian local Col Pearse (S10) from Melbourne H20 Swimming Club. Jason notched up 810 points with a time of 1:00.98 to take silver while Pearse finished narrowly behind on 793 points with a time of 59.11.

Dolphins Jake Michel (SB14) and Ahmed Kelly (SB3) placed first and second in the Men’s Open 50m Breaststroke Multi-Class. Breaststroke specialist Michel, who swims for Carina Leagues CJ’s touched in 30.99 (801 points) to snatch the gold ahead of Kelly who finished in 54.63 (657 points). Rounding out the top three was SOPAC’s Oscar Stubbs (SB13) who pencilled in a time 33.49 (597 points) to secure bronze.

Seems that Popovici was born on September 2004, like Whittle

That DOB was modified during the competition. https://swimswam.com/romanias-popovici-hits-4982-100-free-to-become-newest-sub-59-14-year-old/

Erika Fairweather is a New Zealander.

I am still very curious who will eventually line up for Australia in that 4×100 freestyle relay? I am guessing it will be the same guys as last year, hopefully with the addition of a fast Jack Cartwright and hopefully some of the younger guys drop times this year.. ashton brinkworth for example did 49 flat last year

Cant think about the mens Olympic relays….I get way too excited! I suspect they wont fall US, AUS, GB like last year though! And the womens and mixed will be tight too.