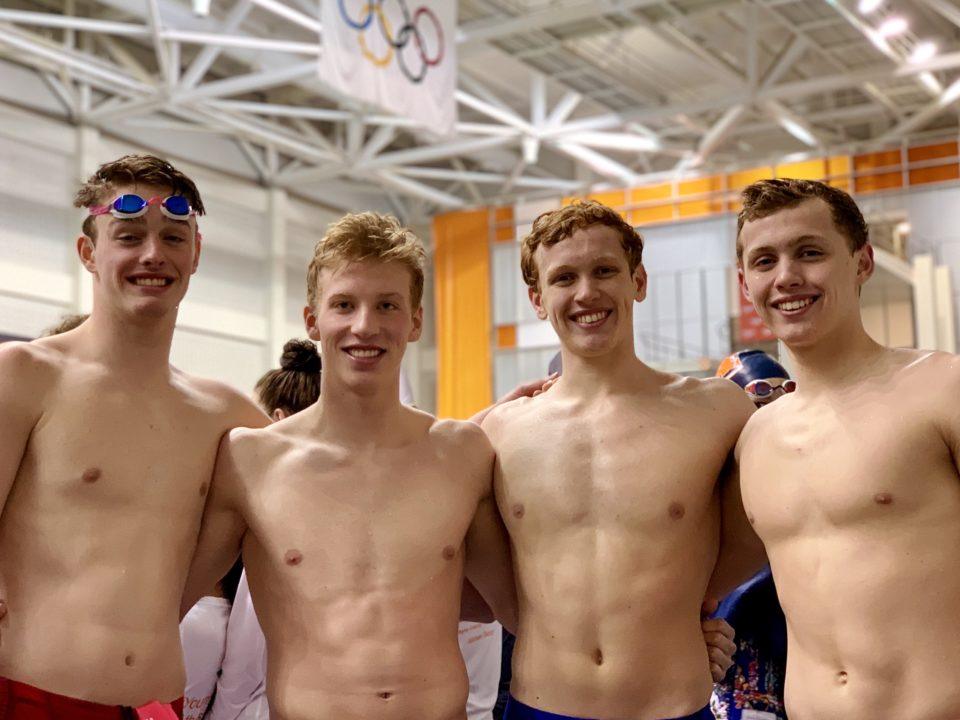 The Manta Rays changed their relay order from Winter Juniors, which resulted in an even faster swim and a new 15-18 National Age Group Record. Current photo via Ken Heis

All warmup pools were back in action on Friday evening at the 2019 Southern Premier meet in Knoxville, Tennessee. The boys of the Mason Manta Rays were all-systems-go as well, and swam their way to a new National Age Group Record in the 800 free relay.

The team of Adam Chaney, Jacob McDonald, Jake Foster, and Carson Foster combined for a 6:23.14. That took another 8-tenths of a second off their old 15-18 National Age Group Record of 6:23.97, set at Winter Juniors in December.

The same group of Mason swimmers, albeit in a different order, re-set their own record after breaking it by more than 4 seconds in December.

The Foster brothers, the best known among the Mason swimmers, actually, on net, added time from the previous record. It was McDonald, who dropped more than 7 tenths from his previous split, and Chaney, who was faster on a flat-start on Friday than he was on a rolling start in December, who made up the gap on the record.

Chaney is still only 16, meaning that this relay wasn’t eligible to break the 17-18 National Age Group Record. That record still belongs to SwimMAC’s 2013 relay of Matthew Josa, Jack Manchester, Michael Chadwick, and Kyle Darmody, who swam a 6:28.90.