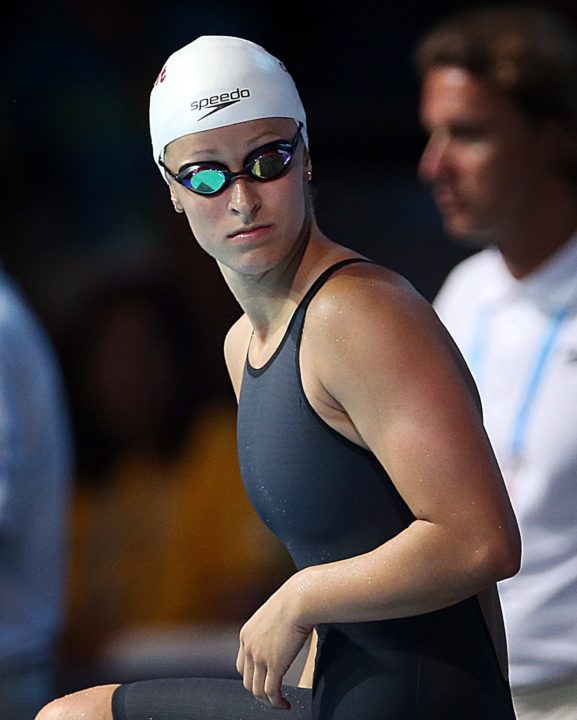 The Québec Canada Cup in Montréal, Que. wrapped up tonight after one of the fastest finals sessions we’ve seen all... Archive photo via Swimming Canada/Ian MacNicol

The Québec Canada Cup in Montréal, Que. wrapped up tonight after one of the fastest finals sessions we’ve seen all weekend.

The finals kicked off with the fastest heats in the womens 1500m freestyle. Lindsay Vrooman took to the pool and out-swam a young field to claim first in 16:30.74. In Second was 15-year-old Courtney Harnish way back in 16:49.32.

The mens 800m freestyle was a lot closer than the women’s 1500m freestyle as 19-year-old Nicolas Masse-Savard from the Gatineau Swim Club won the event by just over three seconds with a time of 8:24.08. Behind him was Spencer Lafata from Badger Swim Club in 8:27.16 and Jake Silverthorn from the Newmarket Stingrays in 8:29.36.

Up next was the women’s 50m freestyle, an event with some of the greatest depth at this competition. After taking the top seed in this morning’s prelim session, Chantal VanLandeghem took the win tonight in a quick 25.01 over Canadian sprint icon Victoria Poon. Poon managed to hold on for silver with a time of 25.60 just holding off CIS 50m freestyle champion Sandrine Mainville who touched in at 25.62 to round out the top three. Michelle Williams from the North York Aquatic Club wasn’t far back, finishing fourth in 25.68. All four girls are on the Canadian national team and will be representing Canada at either the Pan Pacs, Commonwealth Games, or in some cases both.

Oleksandr Loginov from the Toronto Swim Club grabbed gold in the men’s splash-and-dash with a swift 22.93. That time was just off the mark of 22.87 that he set in prelims earlier today. Finishing second was Badger Swim Club’s Derek Toomey in 23.02.

The women’s 200m breaststroke was all Martha McCabe as she won the event in start-to-finish fashion taking absolute control of the race. The 24-year-old swimmer from the Toronto Swim Club managed to throw down a 2:27.40 which was just off the time of 2:27.03 that she set at trials. Considering that she’s coming back from an injury and this isn’t a championship meet McCabe is looking like she’s on the right road to full recovery.

Cody Miller denied Canadian breaststroker Richard Funk his breaststroke sweep tonight by beating him to the wall in the men’s 200m breaststroke final. The race was pretty much just between those two. Miller led at the 50 and had a ever so slight lead at the 100m mark, but Funk caught up to him and pulled it just about even at the 150. Miller pulled off a last 50m split of 35.51 to bring home a big win beating Funk 2:16.57 to 2:16.67.

Sixteen-year-old Danielle Hanus of the Newmarket Stingrays absolutely dominated the competition in the 50m backstroke, showing promise with a great time of 29.11. Hanus beat second place finisher Cynthia Pammett by approximately eight-tenths of a second, Pammett finishing way back in 29.92. Hanus and Pammett were the only two girls to dip under 30 seconds tonight.

James Wells won the mens 50m backstroke tonight in a 25.82 receiving little competition from the rest of the field.  The next finisher,  Patrick Conaton, finished way back in 27.33.

In what might have been the most anticipated event of the evening, Katerine Savard took down Audrey Lacroix in the 100m fly final. After posting a very fast prelim swim this morning, it looked is though this race was all but won for Savard, but Lacroix kept it close tonight swimming a 58.65 to Savard’s 58.41. Savard was out like a rocket the first 50 in 27.15, but Lacroix’s back end speed is what kept her in the race tonight. Savard is currently ranked third in the world in this event for the 57.27 that she set at Canadian Trials in April.

As promised, the mens 100m fly was kept close. Geoffrey Cheah from Club Wolverine ended up topping the field with a 53.53. Finishing second was Toronto Swim Club’s Edward Liu in 55.64.

In the women’s 50m freestyle Joy Fanaras took the win in 31.65. In the men’s version of the event it was no surprise that multi-time Paralympic medallist Benoit Huot took the win in 26.32 over Nicolas-Guy Turbides’ time of 27.03.