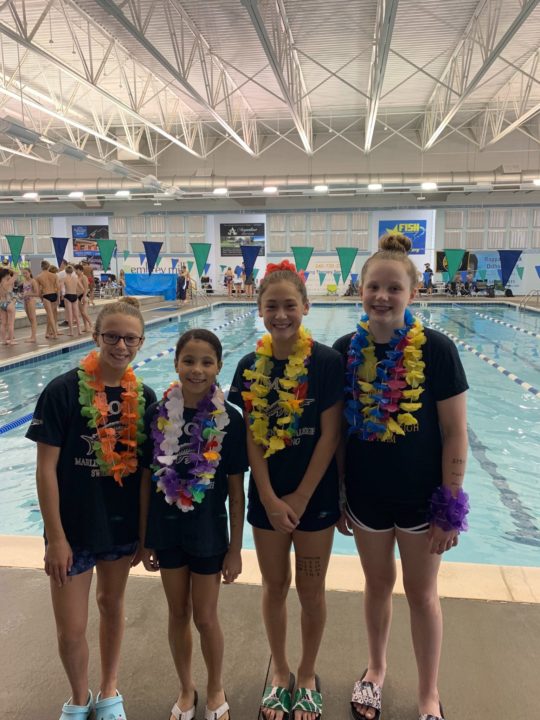 The 10 & unders of the Marlins of Raleigh now hold the fastest 10 & under long course relays, of either gender, in USA Swimming history Current photo via Kevin Donnelly

This time, the relay of Annabel Townsend, Chloe Light, Shayna Elgart, and  Devon Whitlock combined for a 2:18.15. That slides just-barely under the 2016 record set by another North Carolina relay. The TAC Titans quartet of Lily Ann Willis, Nicole Zettel, Taylor Cureton, and Meredith Whelehan swam a 2:18.71.

Both the 200 free relay record on Sunday and the 200 medley relay record on Monday are also faster than the boys’ 10 & under National Age Group Records – which has historically not been unheard of, but more recently has become less common. Pending approval of these records, four 10 & under girls’ marks are faster than the corresponding boys’ marks: these two relays (the only relay distances recognized in that age group), plus Miriam Sheehan’s 29.48 in the 50 fly, which is better than Carson Foster’s 29.91 in the same event; and Leah Hayes 2:30.97 in the 200 IM, which is better than Ronald Dalmacio’s 2:31.87 in the same event.

The 200 medley saw backstroker Annabel Townsend sub in for Lorelei Schmidt, who was on the record-setting 200 free relay. Townsend, unlike the rest of her record-setting teammates, is only 9. The team’s splits:

The Marlins previously time trialed their medley relay on Sunday, but were disqualified.

Congrats ladies! On an unrelated note, has Miriam Sheehan been swimming lately? She doesn’t have any swims logged since early 2017.