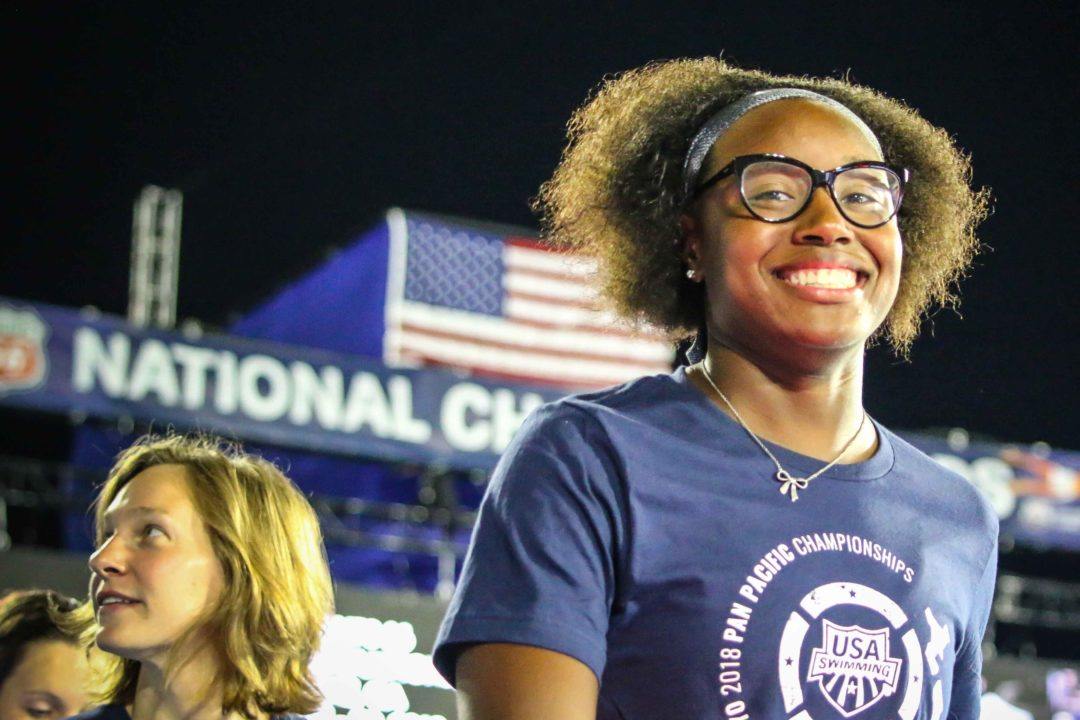 Olympic Champions Simone Manuel and Nancy Hogshead-Makar have been named to Sports Illustrated’s list of the most influential women in sport. Archive photo via Jack Spitser/Spitser Photography

Sport Illustrated has named Olympic Champions Simone Manuel and Nancy Hogshead-Makar to its list “The Unrelenting”, which is intended to illustrate “the most powerful, most influential and most outstanding women in sports right now—the game-changers who are speaking out, setting the bar and making a difference.”

According to the magazine’s website, the list is intended to celebrate “the women in sports who are powerful, persistent and purposeful in their pursuits—for athletic greatness, gender equality, social justice and more. Women who are innovating, influencing and inspiring. Women who are showing up, speaking out, setting the bar and making a difference, both inside and outside of competition.”

Manuel, who is a 2x Olympic gold medalist, 11x World Champion, and multi-time world record holder is one of the most prominent names in swimming right now. At the 2016 Olympic Games, she became the first black woman to win an individual Olympic gold medal in swimming when she tied Canada’s Penny Oleksiak for first place in the 100 freestyle.

In recent months, amid social justice issues and the black lives matter movement, Manuel has been using her platform to highlight racial justice issues. She has also helped USA Swimming promote diversity in the sport of swimming through her appearances on various webinars and podcasts, where she often speaks about her own experiences as a black woman in a predominantly white sport.

Three years before her Olympic victories, Hogshead-Makar was raped while running on campus at her college, Duke University. Due to this, she suffered severe PTSD that almost ended her career. As a result of this experience, Hogshead-Makar has become an advocate for Safe-Sport and women’s rights in sport.

In 2014, she founded Champion Women, an organization that leads efforts targeting equality and accountability in sport, dealing with issues such as Title IX compliance, sexual harassment, and abuse. As a career-lawyer, Hogshead-Makar also helped create the “Protecting Young Victims from Sexual Abuse and SafeSport Authorization Act”, which was passed by Congress in 2018. Under the act, athletes receive a greater amount of protection and support from their teams in order to help protect them against sexual assault and abuse.

Also included on the list alongside Manuel and Hogshead-Makar on the list are several notable names in sport, including tennis legends Billie Jean King and Serena Williams, gymnast Simone Biles, and track and field star Allyson Felix.

✊🏾Congrats to both. Very deserving ✊🏾

Congrats and well deserved. It’s kind of telling when USA Swimming’s executives and board wants nothing to do with Nancy.

Nancy’s work in this area is unmatched. Her voice is persistent and powerful. The recognition deserved, for her bringing this challenge to the forefront, has no limit. Oslo should take notice.