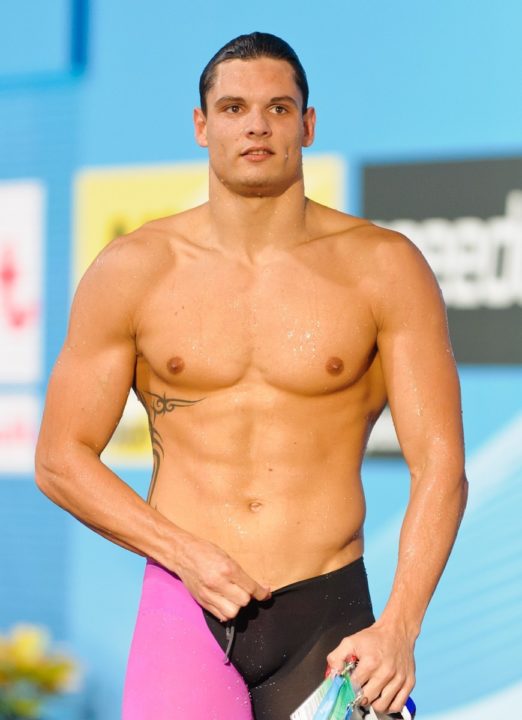 Florent Manaudou is now the fastest 100 freestyler ever in textile, after going 45.04 in prelims of French Nationals. Archive photo via Victor Puig

Florent Manaudou set a new World Textile Best in prelims of the men’s 100 free at the French Short Course Championships, going the fastest time ever swum in the event without the now-banned polyurethane suits.

Manaudou went 45.04 in the short-course 100m free, blowing away the previous textile-best of 45.52 set by Russian Vlad Morozov last winter at the Short Course World Championships in Istanbul.

Even more amazingly, Manaudou is just a tenth off of the overall world record of 44.94 set by Amary Leveaux back in 2008 at the height of the high-tech bodysuit era.

The swim puts Manaudou atop the 2013 world rankings ahead of previous world leader James Magnussen of Australia, who had posted a time of 45.60 back in July. Manaudou will swim the 100 free again tonight at the final, where he’ll have a chance to make a charge at the world record while going after the French national title.

Read the recap of the entire day 2 prelims session here.

Did you saw Ocampo 100free?A PB by 1.26!He will give Santana a good run in 50 free tomorrow…he made 22 flat in Corinthians 4x50free as second leg.His best(from his fourth place Junior Worlds) is 22.48.We are gonna see some fireworks tomorrow.I hope the weather dont change too much.

It will be interesting to see what he can do in this event in long course by 2016.

Mr Anderson, it was the final.

You are correct. We’ve updated the article