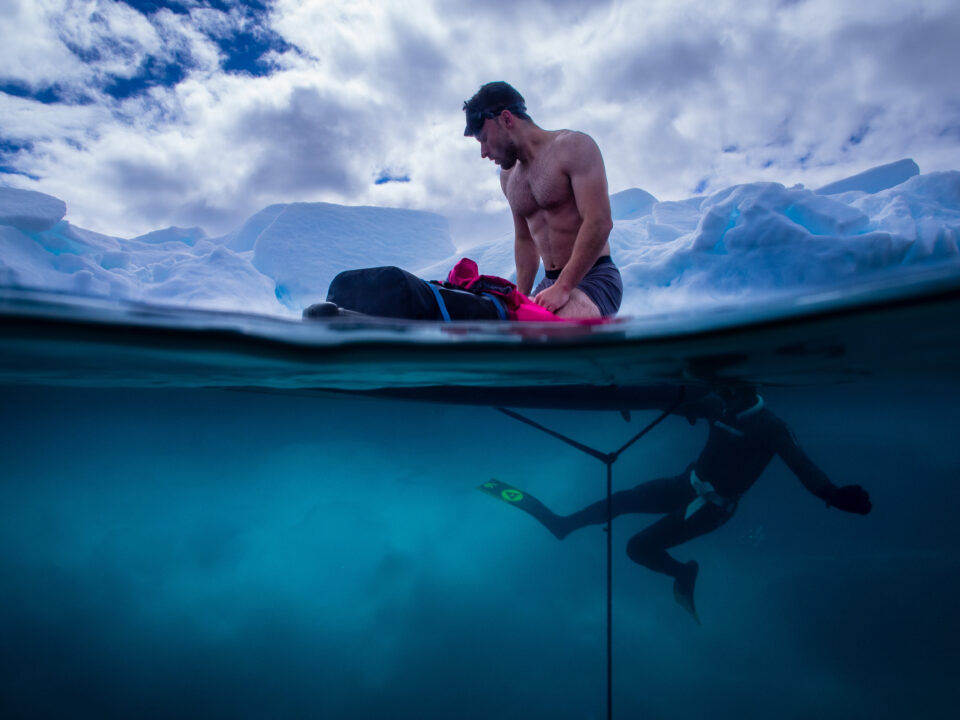 Filmmaker and entrepreneur Luke Adams free-dived underneath an iceberg in Greenland’s 28-degree Fahrenheit water to raise awareness for men’s mental health. The project was completed in July 2022, and sponsored by Movember, the month-long men’s health charity event held worldwide each November.

Adams viewed icebergs – whose ice tips can reach up to 300 feet above sea level in Greenland while about 90 percent of their full mass is hidden beneath the water’s surface – as a visual metaphor for the invisible (and often silent) mental health battles men experience. 80 percent of suicides are committed by men, according to the Centers for Disease Control and Prevention (CDC). Adams’ film aimed to inspire men to feel confident in sharing their mental health journeys, fighting the stigma men usually face when speaking about their mental health.

Adams swam underneath the iceberg without an oxygen tank, mask, or wetsuit and documented the experience in a short film. “I wanted to do something that had never been done before, in order to inspire men to feel confident in sharing their own mental health journey,” Adams wrote in his Movember article in July.

Adams is currently a creative director at Story Real Studios, a company based in Connecticut that creates video content strategies for purpose-driven brands. He detailed his own experience with anxiety and self-doubt for the past 25 years to Movember. “I’ve always had the impression that I needed to hide my struggles below the surface in order to appear ‘a man,’” Adams wrote. The stresses of running a business, financial pressure, and isolation during the COVID-19 pandemic pushed him into the darkest 12-month period of his life.

“It was then that I learned that asking for help wouldn’t make me weak,” he said, “It meant surviving to fight another day.”

Adams and his team faced transportation setbacks during the project due to sea ice. The water was also colder than they expected – Adams had been training in “just-above-freezing water” to prepare for the dive.

“Months of training, tens of thousands of dollars spent and a team of people counting on me, and I [was] ready to throw in the towel on the first day,” Adams remembered thinking after first experiencing the cold water.

On day two, Adams had second thoughts again when he initially submerged his face and began diving down the line. “But I remembered my purpose and pulled myself deeper,” he said. “As I descended further and further, both the urge to breathe and the freezing feeling disappeared until I felt total relaxation. Once I reached the bottom of the dive line, I took my mask off and swam towards the iceberg. I held onto the glacier for what felt like minutes as time slowed down to a stop.”

He recalled hearing the clicking of Daan Verhoeven’s camera which reminded him to head back to the surface. And then he dove again, and again – a total of 12 times over the next few days to record all the footage needed for the short film.

Luke Adams before a dive courtesy of Luca Malaguti

Adams’ short film was also sponsored by men’s fashion brand Sheath Underwear which pledged to donate 25 percent of all sales on the underwear line worn in the film to Adams’ Movember fundraising efforts which you can reach here. Movember raises funds for mental health and suicide prevention, prostate cancer, and testicular cancer.

Why do people think an idiot putting himself in a jeopardizing situation a good method to raise mental health awareness? Seems the opposite of good mental health

People love attention. If they say they’re doing it for a cause it makes them seem less attention seeking, even if what they’re doing has no actual connection to what they claim to be supporting.

Why is he an idiot, and what is jeopardizing about this situation?

As an experienced freediver who has dived with no suit in cold (though not sub-zero) water, I think you are wrong on both counts.

Um, he’s an idiot because he is free-diving under an iceberg? Figured that was pretty self-explanatory

And isn’t free-diving extremely dangerous? Did I miss something?

In my opinion, you missed something. I think a lot of sensational articles by writers who are not themselves freedivers may be a major factor here. I have been freediving for almost 5 years and competing for 2. This sport is very safe. Especially relative to SCUBA diving, for example.

It can be dangerous if protocols such as having trained safety divers monitoring the freediver are not followed. Most of the accidents occur when untrained swimmers and spearfishers ignore safe practices. This group had well-trained safeties, and I am confident they followed all of the protocols.

Please read up on the sport. If you like swimming, you may find yourself wanting to try it!

I think it unwise to report on or promote freediving in any capacity due to the inherent danger of blackout and drowning. I can personally attest to two cases of my swim team families who had sons blackout due to freediving type practices (though fortunately both were rescued before dying.)

Do you also have a problem with driving because sometimes people crash and die?

you can say that about most hobbys and sports.

As a competitive depth freediver, I strongly disagree. “Feels scary” and “is dangerous” do not always coincide. Freediving is extremely safe if proper safety protocols are in place (e.g. trained safety divers). The great majority of deaths in this sport are due to untrained swimmers and spearfishers diving alone or with inexperienced safeties. If anything, freediving needs more coverage so people become aware of the risks and how to mitigate them. See the recent example of an artistic swimmer “fainting” underwater after a routine, and her well-intentioned-but-poorly-executed rescue.

A lovely video and an honest message which everyone, esp. men/swimmers need to hear.
The little voice in your brain saying “I need help” should be listened to – really!