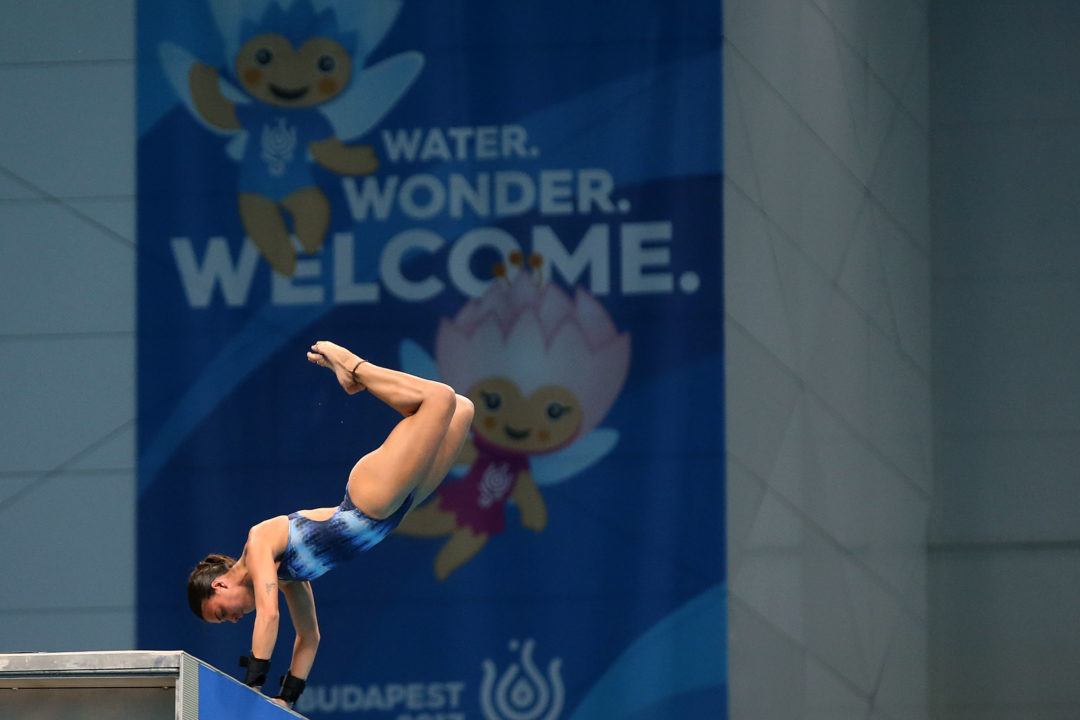 Tom Daley won gold in the men’s 10m platform to close out diving at the FINA World Championships.

The sixth day of diving from the Danube Arena in Budapest featured the final of the women’s 10m platform, and after the semi-finals it looked like the Chinese domination was going to continue.

China currently leads the medal table with five golds and 11 total medals, with all but two silvers coming from diving.

In the semi-finals the Chinese duo of Si Yajie (382.80) and Ren Qian (367.50) held a healthy lead and looked to be shoo-ins for a 1-2 finish. Ren is the defending Olympic gold medalist, and Si won silver in Rio. On top of that, the two had already combined for gold in the synchronized 10m platform event on Sunday.

However, in the final it was Malaysia’s Cheong Jun Hoong who walked away with the gold medal, improving her semi-final score by an incredible 72 points to score 397.5 and edge out Si. Si settled for silver with a score of 396.00, and Ren took the bronze with 391.95.

Cheong already had won a medal in Budapest, taking bronze in the synchronized platform event with teammate Pandelela Rinong. She also won silver in Rio in that event, but this is her first major international individual medal, and she didn’t even contest this event in Rio.

Prior to the Women’s Platform Final came prelims and semis of the Men’s 3m Springboard.

China led the way again, as Olympic gold medalist Cao Yuan scored 517.45 to improve his prelim score by nearly 65 points and qualify 18.7 points ahead of anyone else. Cao already has a silver medal at the Championships from the 3m synchro event.

Great Britain’s Jack Laugher, the Olympic silver medalist and 2015 World bronze medalist, qualified 2nd overall with a score of 498.75. Mexico’s Rommel Pacheco, who won a silver yesterday in the mixed team event, qualified 3rd overall in 478.90. 4th was Cao’s synchro partner Xie Siyi, who led the prelims with a score of 512.90 but was just 476.50 in the semis.

This is a general comment on the sport of diving. China has been so dominant in recent years that most people including China would like to see good competition from other countries as it increases its popularity globally and that’s healthy for a great Olympic sport. I’m old enough to remember back in the days when China was so dominant in table tennis that rules and equipment requirements were amended to increase the chance of winning by non-Chinese players, again a measure embraced by all countries including China.

With that said, I’m happy to see non-Chinese divers are going well in Budapest. The nature of this and many other sports always generates heated (often endless) discussion on subjectivity.

To add to that, not only has China embraced the changes, but it’s actively promoting its traditionally dominant sports overseas. A number of years ago, the Chinese sports administration initiated a program to send Chinese coaches and athletes overseas to boost the competitiveness of other countries in sports like diving, table tennis, badminton, women’s weightlifting.

This result is a product of that initiative. If I’m not mistaken, the top 10 women all have Chinese coaches. The Malaysian and North Korean divers also train in China. This is good for everyone, really. Diving prospers, non-Chinese divers prosper. And Chinese divers, when they do win (which is still a heck a lot of the time), now earn more recognition from the increased… Read more »

YEAH YEAH YEAH..Which ever they was an upset in any points sport, the first thing in their mind was the judges were bias… bla bla bla

As of now, there is no unified Korea (and as much as people want it sentimentally, it would destroy the South Korean economy, which is 11th largest in the world and growing, so it’s very unlikely to happen), so it’s important to distinguish which of the two these divers are from. There is South Korea, and North Korea. These two divers are from North Korea (PRK). As a side note, Kim Kuk Hyang is listed as being 5’1 and 79 pounds at 18 years old. That is horrifyingly thin.

Are you sure it is listed in feet inches & pounds because PRK is metric . Ppl get those conversions very wrong & thats even if the correct info is given – which it is rarely .Btw she is not dissimilaiar to the US Rio bars medallist – also 18 .

How do you know that your opinion is objective? Each measurements either by experts or by device have limits of accuracy and we have to accept it. Also timing pads may not necessarily better than expert opinion. I’m almost sure that expert would find Cavc the winner but not Phelps.

Lmao get over yourself, Phelps clearly won.

As far as we should be concerned, it’s an objective statement to say that diving is scored in a more subjective way than swimming.

Sure. It wasn’t right at the first place to compare the competition in quality with quantitative one. The measure of quality is by definition subjective process. Therefore the procedure of averaging of expert opinions is applied. Is the diving scouring system perfect? Maybe not. But I doubt that subjective opinion of AVIDSWIMFAN & Co made by watching competition on TV is more accurate than group opinion of experts who sit next to the pool.
Are the quantitative mechanical and electronic measurement systems are free of malfunctioning? Of course not.
And I will tell you that if somebody wants to fix the competition it is much easier to do
by faulting quantitative measuring system than to deal with… Read more »

I saw it and agree. Any time a Chinese diver made a slight mistake the judges overreacted. I don’t know much about diving judging but it did seem like both Chinese girls outclassed the field by quite a bit overall.

I agree with you, Avidswimfan.

Makes a change from the overscoring they received for years. Doesn’t make it right – But, it is what it is.