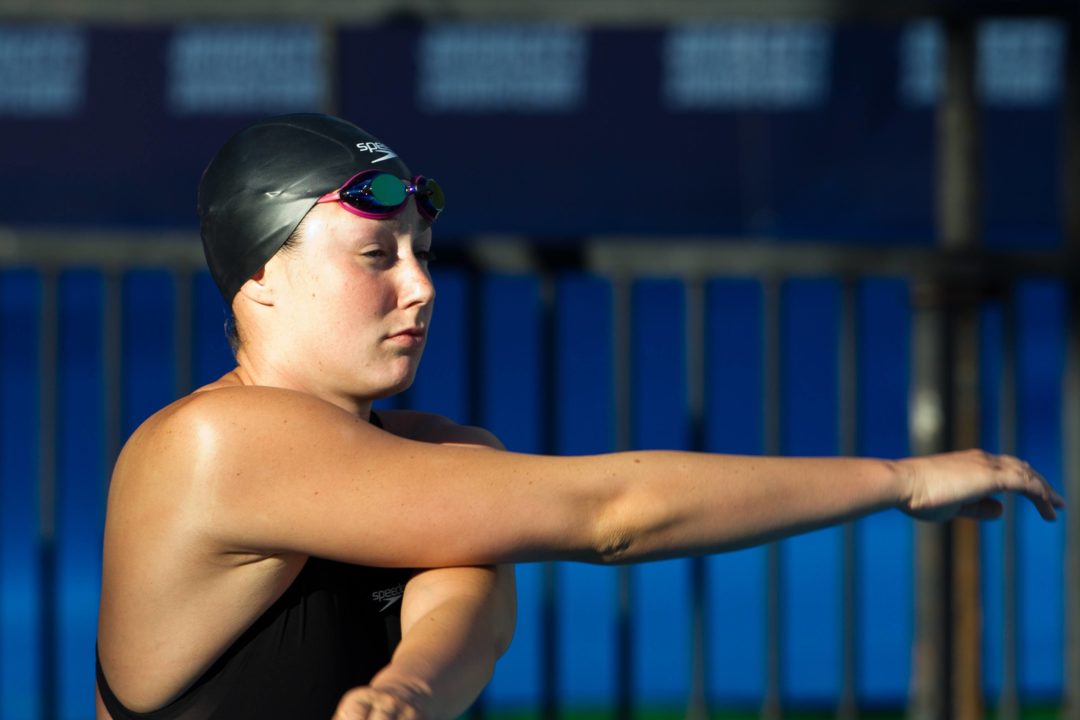 Michael Phelps kicked off night 2 of the Columbus Grand Prix with a world-leading swim, but Christine Magnuson's lifetime-best raised the most eyebrows.

Night two of the 2012 Columbus Grand Prix saw another crop of Meet Records go down. In a great parallel to the first night, Michael Phelps kicked things off with an awesome swim.

The Hungarian women have had some good swims at this meet and some not-so-good swims, but their top performer so far has been Zsu Jakabos. Jakabos took her 2nd event win of the meet in 2:08.09, which is a new Meet Record. Despite grabbing the win and the Record, she was faster than this at this point of last season – so perhaps her training cycle has been tweaked a bit as a result of this American training trip.

The runner-up was Kim Vandenberg in 2:10.17. That’s an outstanding swim for her and shows the focus she’s regained in turning to the United State to train after spending sa good chunk of time working with the elite program in Marseilles, France. She represents the New York Athletic Club officially, but she’s training in Berkeley right now with Natalie Coughlin and Teri McKeever at Cal.

NBAC’s Allison Schmitt kicked off another one of the marathon sessions that she’s become so fond of during her redshirt season from college with a 4th-place finish in the 200 fly in 2:11.85. Just like we saw in the 200 free, this shows the effect of the three-a-day practices they’ve been running in Baltimore, as she was faster in this race both in Austin and in Minneapolis.

Michael Phelps continued to really “feel” this meet, and won the 200 fly in 1:55.32. That’s nearly an identical time to what he swam mid-year at the Indianapolis Grand Prix last season (which was the March Grand Prix meet last year), but this season he’s doing a lot more training. It’s outstanding that even under those circumstances, he’s still got the top time in the world.

In 2nd was Stanford commit Tom Kremer in 1:58.34. That’s a huge time for a swimmer whose still only 17, and his best by six-tenths. Kremer is a dual American and Israeli citizen, and though he’s a USA Swimming National Age Group Record holder, he’s now officially decided to try for the Israeli Olympic Team. If he were competing as an American still, however, he would be the 4th-fastest 17-year old in this country’s swimming history. Since signing with Stanford, he’s improved a full two seconds in this event long course, and his value for the Cardinal has gone through-the-roof.

Dakota Hodgson, a former Auburn swimmer who will transfer to USC next fall, was the only other swimmer under two minutes when he touched in 1:59.31.

Christine Magnuson continued to excel in the 50 free as she has all season with a 25.06 for the victory. That’s the best time of her career, and makes her the fastest American in the event in 2012. If Natalie Coughlin decides to add the 100 fly to her event schedule, and Claire Donahue continues to improve, the 50 free might actually be Magnuson’s path to the Olympic Team.

Kate Dwelley took 2nd in 25.66, and Ohio State swimmer Michelle Williams took 3rd in 26.00 to represent for the home-town crowd. That’s a lifetime best for her and a strong leadup into next week’s NCAA Championship meet.

Japanese swimmer Masayuki Kishida, who is three weeks out from the Japanese Olympic Trials, won the men’s 50 free in 22.62 against a pretty weak field. He, much like his countrymate Kosuke Kitajima, is at the very front end of his taper and the results have been showing up so far in this meet. So far, he’s the fastest Japanese swimmer in this event this year.

South Africa’s Graeme Moore took 2nd in 22.75, and Krisztian Takacs took 3rd in 22.78. For Takacs that is an Olympic consideration time, and depending on how many entries there are gives him consideration for an Olympic spot.

Natalie Coughlin took her 2nd event win of the meet with a 1:00.81 in the 100 backstroke. That’s a new Meet Record, and though her post race comments indicated that she was satisfied with the swim, it wasn’t quite as impressive as her 100 fly from Friday. That does bump her up into the World’s top 10 this year, however.

Coughlin, who rode up against the lane-rope coming off of the turn, got a huge challenge from Mexico’s Maria Gonzalez-Ramirez in 1:00.96, which is also under the old Meet Record. That time was just .02 away from the Mexican National Record. Gonzalez-Ramirez was rested for this meet and gunning for an Olympic Qualifying Time, but came up a few tenths short of the automatic mark. That swim is still fast enough to warrant serious consideration from new National Team coach Dirk Lange.

Much like the women’s battle, the men’s 100 backstroke was very-much a back-and-forth race. Matt Grevers looked strong on both walls (though that may be because he was racing against a field that isn’t full of great underwater swimmers), but 2010 National Champion David Plummer roared back in the closing 20 meters to take the win in 53.73 on a final lunge to the wall. Grevers was 2nd in 53.79.

Many (myself included) have been under the impression that Grevers was sort of a given to reclaim his Olympic spot in this event after missing the World Championship roster, but this swim was a gutsy reminder that Plummer, despite being a late-bloomer, is still going to be a huge factor.

Allison Schmitt continued to swim very tired, but still took an easy win in 4:08.88. She went out in a strong 2:04.19, had a very good third hundred, but then was gassed. She gave up some ground on the final lap to her training partner Gillian Ryan, who was 2nd in 4:09.70. That’s the 2nd-best time of her career, and a splendid mark for only a 16-year old under consideration of huge training that she and her teammates are in the midst of.

Ryan, who excels in the longer events, got a bit of payback on fellow 16-year old Leah Smith, who was the higher finisher in the 200 free on Friday. Smith was 3rd in this race in 4:09.89.

Club Wolverine’s Matthew Patton had an outstanding swim to win the men’s 400 free in 3:51.83. That’s about a second faster than he was in Austin, and as good as he’s ever been this early in the year. He will be vying for a spot in a wide-open 400 freestyle field.

Hungary’s David Verraszto took 2nd in 3:53.55. In 3rd was New Trier’s Reed Malone in 3:56.26. Malone was a member of the New Trier High School 400 free relay that a few weeks ago broke the National Record, but he’s a middle-distance freestyler by trade. The high school junior has a monster of a future in the 200 and 400 (500 in yards), and with a 4:19 500 free already to his name is one of a group of swimmers that has a chance at Jeff Kostok’s National High School Record in that event next season.

Andrea Kropp broke the Meet Record and won the women’s 200 breaststroke in 2:26.85, and actually obliterated the mark as it stood before this meet by three seconds. That’s a fantastic time for her (though not a best time) after an outstanding 100 on Friday. The swim moves her into the World’s top-10, and marks her as the 2nd-fastest American. She continues to stake her claim as a great darkhorse candidate, or maybe even a favorite with how well she’s swimming, for the second spot in the women’s 200 breaststroke at the Olympic Trials.

A bit unusually, 100 breaststroke winner Annie Chandler was not entered in this event. She instead swam the 50 free on Saturday (she didn’t give much effort in finals, but swam a 26.74 in prelims), and will add on the 100 free on Sunday. Does this mean that she’s letting the 200 go to focus on the 100? Can’t say that yet, but it will be a topic to keep an eye on.

A bit unusually, 100 breaststroke winner Annie Chandler was not entered in this event. She instead swam the 50 free on Saturday (she didn’t give much effort in finals, but swam a 26.74 in prelims), and will add on the 100 free on Sunday. Does this mean that she’s letting the 200 go to focus on the 100? Can’t say that yet, but it will be a topic to keep an eye on.

Japan’s Kosuke Kitajima gave Dave Salo trainees a sweep of the 200 breaststroke with a win in 2:10.35. That ranks him 4th in the World this season headed into the Japanese Trials in a few weeks. He’s going to feel more pressure than he has at any point in his career to make the Japanese squad, and he’ll have to be razor-focused with a chance at a pair of Olympic threepeats (100 and 200 breaststroke) on the table.

Second place went to Hungary’s Akos Molnar in 2:12.42. He’s often overshadowed by his countrymate Daniel Gyurta (not at this meet) who’s the two-time defending World Champion in the event, but Molnar himself is a World’s semi-finalist in the event, and with a bit of improvement could get into the final in London.