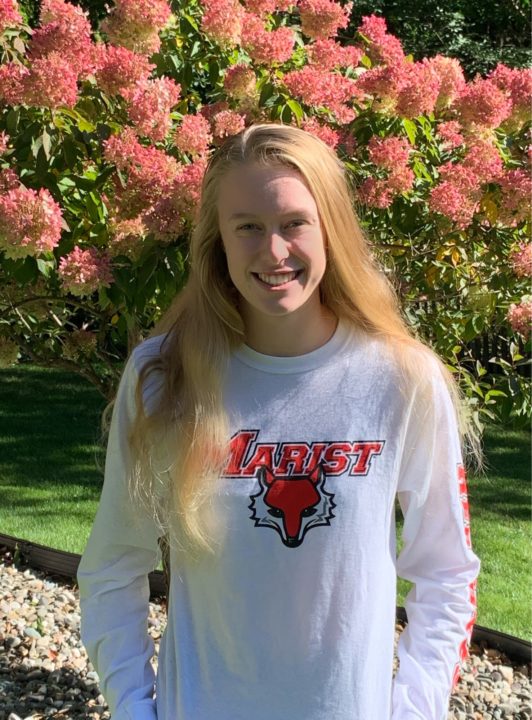 Maggie Hartman, a senior at Bethlehem Central High School, New York, will stay in-state and swim for Marist College in the fall of 2021. The D1 MAAC school is located about an hour-and-a-half from Hartman’s hometown.

Her father Brink Hartman, an assistant coach on her club team the Albany Starfish, is a former standout swimmer at Marist. He was a school record-breaker and was named the Marist College Male Sportsman of the Year in 1992.

Maggie Hartman is one of the top available recruits from the Adirondack LSC in the central and northern part of the state. Last season, as a junior, she qualified for the New York High School State Championship meet both individually and as part of a Bethlehem Central relay.

Primarily a freestyler, Hartman is already within scoring range in the 200 free at the MAAC Championships. Her best time would have fallen between the 8th and 9th qualifiers at last year’s meet.

While Maris had success last season in the 500 free, including sophomore conference champion Sidney Judson, they struggled in the 100 and 200 freestyles. They had only 1 individual scorer, for 7 total points, in the 100 free, for example.

That left them in just 5th place in the meet-ending 400 free relay, with only 1 leg of the relay (the leadoff Georgeanne Zimmerman) splitting under 53 seconds.

The Marist women were 3rd at that MAAC Championship meet, finishing just 8 points behind Iona and just 32 points behind Fairfield in one of the more competitive conference championships in the country. A better 400 free relay could have jumped Iona for 2nd, and that’s where Hartman has a big chance to contribute immediately.

Hartman joins a Marist class of 2021 that includes Pennsylvanian Maddie Healey, and New Jersey native Melanie Nunn. That group will arrive on campus to a new head coach after Larry VanWagner announced earlier this month that he would retire after 45 years at the school. VanWagner is the only head coach in program history.

Marist has not yet announced a schedule for the 2020-2021 season, though the MAAC has just “postponed” but not “canceled” its swimming & diving championships as a result of the ongoing coronavirus pandemic.