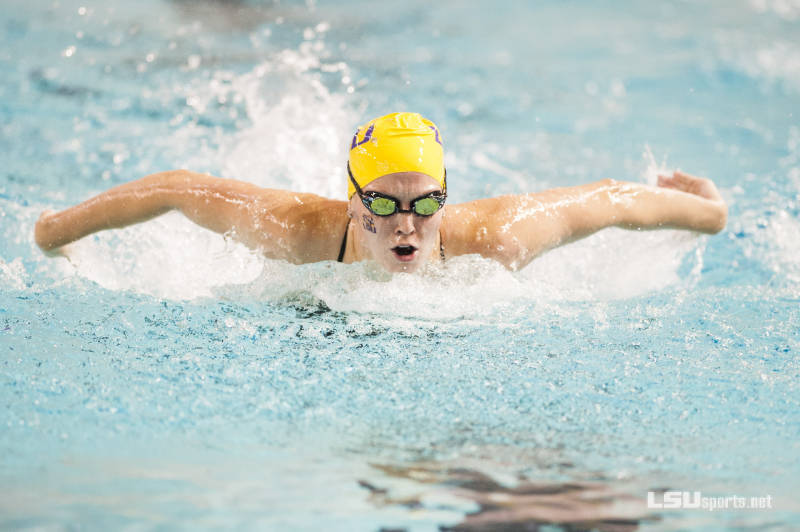 The LSU Tigers hosted the Incarnate Word Cardinals on Saturday in a battle of Division I, Interstate 10 opponents. The... Current photo via LSU Athletics

The LSU Tigers hosted the Incarnate Word Cardinals on Saturday in a battle of Division I, Interstate 10 opponents. The hosts came away with a 203-92 win on the women’s side and a 188-104 win on the men’s side.

Those scores were boosted by the LSU men exhibitioning the last two events, including a 1-2 finish in the 200 free relay.

Being a home meet, the LSU Tigers for the most part were using Saturday as an opportunity to race rather than focus on the numbers on the scoreboard. They still put up some solid times, however, in their last meet before the mid-season Art Adamson Invitational at Texas A&M.

“We talked about making the most of our opportunity in the water today,” LSU Swimming coach Dave Geyer said. “We were able to respond to some different things today and it was a good team victory.”

Junior Megan Cox swept the women’s butterfly races, with a 2:01.80 in the yard fly and a 55.62 in the 100 fly. Those were both lifetime bests for a swimmer who is typically an IM’er and freestyler.

A comparison of splits between Cox and Carter:

The Cardinals, meanwhile, relied on swims from sprinter Lana Nguyen, who has been a rock through a tough early-season schedule for UIW, for big scoring. She took 2nd in the 50 free in 23.68, behind only LSU’s Leah Troskot (23.55); Nguyen came back after a diving break to win the 100 free in 52.25, with LSU’s Jane MacDougall placing 2nd in 52.48.

Incarnate Word’s other win in the women’s events came from Celeste Morgen, who won the women’s 200 breaststroke in 2:21.62.

The LSU men won 13 out of 16 events on the day, ignoring exhibitions, and like their women earned a lot of those while swimming off-specialty events.

Frank Greeff, most typically a butterflier, is also a very important part of the LSU free relays, worked on that part of his schedule on Saturday. He first won the 200 free with a 1:39.91, and then added a 45.82 in the 100 free. As compared to his standard mid-season times, those are very good results for him.

Not everyone was swimming off events, however. Sophomore Silas Dejean performed very well in the 100 (55.41) and 200 (2:02.00) yard breaststrokes, including by a whopping seven seconds in the latter.

Incarnate Word’s next meet will be the Texas Invite in early December.