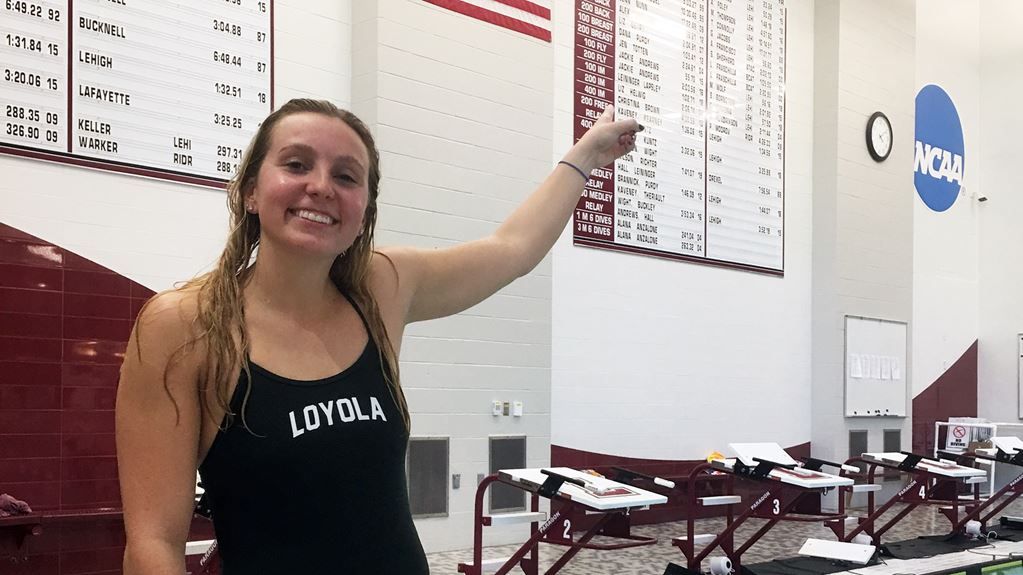 Schouten completed the 200 IM in a time of 2:10.41, beating out her closest competitor by over five seconds while posting the fastest mark all-time at Weinstein Natatorium. She added a second individual win in the 200 freestyle, with her time of 1:57.73 beating out teammate Megan Dickey (2:00.17).

Jack Still was unopposed in the two diving events. He set new season-highs in both, scoring 239.92 points in the 1-meter and 271.80 points in the 3-meter.

The Greyhounds return to the Lehigh Valley next weekend, facing Lehigh in a dual beginning at 1 p.m. on Saturday afternoon.

EASTON, Pa. – The Lafayette swimming and diving team opened their season today with a home meet against Loyola Maryland. The Leopards fell a little short, but it was not without a strong effort from both the men and women.

On the women’s side, Sydney Perks opened the season in style, winning the 1000 yard freestyle in a time of 10:56.78. Her winning time was over 10 seconds faster than the runner up in the event. Perks later came back to also win the 200 yard backstroke in a time of 2:11.89. The two win netted a combined 18 points for the Leopards.

Parks wasn’t alone in the first place action, as Haleigh Marzano finished first in the 100 yard breaststroke in a winning time of 1:10.30 in her first collegiate meet.

Tara Leininger also started the season off fast, winning the 500 yard freestyle in a time of 5:25.42 in one of the closest finishes of the day. Leininger is coming off a strong past season, and looks to be one of the highest scorers on the team this season.

On the men’s side, Justin Lloyd kicked off right where he left off last season, winning the 1000 yard freestyle in a time of 9:48.35. His winning time was over 13 seconds faster than the second place finisher, and he looks to be a force for the Leopards all season. Lloyd also came back later to win the 500 yard freestyle in a time of 4:43.40, giving him 18 points on the day.

Louis Franzone also got in on the winning action, finishing first in the 200 yard freestyle in a time of 1:4479 in his first collegiate meet. The win from Franzone scored nine points in the event.

Another freshman who had a strong debut was Aaron Tupper, finishing first in the 100 yard freestyle in a time of 48.53 to score nine points for the Leopards.

Kyle Goodwill also returns as one of the more experiences swimmers, and he started strong winning the 200 yard IM in a time of 1:59.75 to score another nine points on the day.

“Overall, I’m very happy with the performances of the day, said head coach James Dailey. Compared to last year, the times of our upperclassmen were much better and the first years made quite the impression.”

With only two home meets on the year, today was Senior Day for the Leopards and Dailey was extremely proud of them and their performances. “It’s going to be hard to watch them graduate and move on in their careers, but for now that is still a long way off. We still have seven more dual meets and championships to look forward to.”

With a couple weeks off until their next meet on Friday, November 8th (women only), Dailey believes that this opening meet will motivate the team to train harder and faster to start reaching all of their season goals.