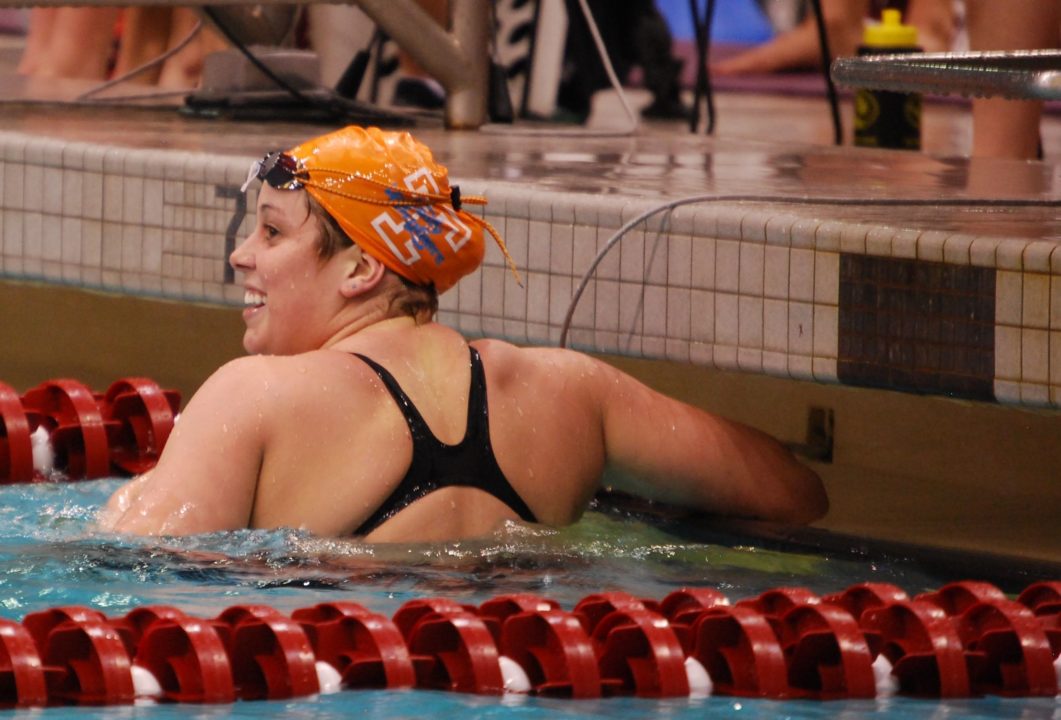 Molly Hannis of Tennessee rocked the 100 breaststroke with a wicked 1:00.31 to beat her previous season best of 1:00.84 and rank her second overall in the nation behind Rachel Nicol. Hannis' breaststroke talents gave her a huge lead over second place finisher Annie Lazor from Auburn who touched in behind Hannis in 1:02.08.

The meet kicked off with the 200 medley relay which went to the Tennessee Lady Vols with a time of 1:38.94. Highlighting the team was Molly Hannis who had the fastest breaststroke split of the night with a time of 26.99. Anchoring the relay was Faith Johnson who split the fastest freestyle leg with a 21.86.

In the men’s race, Louisville was able to come out on top with a time of 1:28.28 to pull off a very close victory over second place Auburn. Grigory Tarasevich led off the relay with a fast backstroke leg of 22.61 to set up the team for the win. Caryle Blondell swam the fastest freestyle leg with a time of 19.47 to help secure the victory.

Finishing second was Auburn, third was the Louisville B team.

The first individual event of the night, the 1000 freestyle, went to Auburn’s Ashley Neidigh in 9:44.82. She had an easy win as Zoe Thatcher made it a 1-2 finish for Auburn sporting a 9:54.46 to come in second. The two girls were the only swimmers under the 10-minute mark.

Evan Pinion of Tennessee was able to get his hand on the wall first in the 1000 freestyle putting up a huge battle with teammate David Heron. Heron led after 950 yards but it was Pinion who turned on the gas during that final 50 to split a 24.52 and win the event with a 9:12.52 compared with Heron’s 9:13.01.

Valeria Hull of Auburn added the second win for the Tigers with a time of 1:49.58 in the 200 freestyle. With that time she was able to hold off Rachel Grooms of Louisville who came in hot during the last 50 with a 27.67 however ran out of pool and was unable to catch Hull, ultimately finishing second in 1:49.69.

Joe Patching of Auburn won the men’s 200 freestyle in 1:37.16 pulling away from Louisville’s Trevor Carroll over the last 50 yards. Patching won the race by a comfortable six-tenths of a second over Carroll who touched the wall in second with a time of 1:37.72.

The 100 backstroke brought another win for Auburn as Jillian Vitarius was able to clock in a 54.52 to win the event over Tennessee’s Madison Hahn. Hahn earned herself a silver in 54.67.

Grigory Tarasevich who had a great leadoff split for Louisville’s winning medley relay demonstrated his backstroke talents once again with a big win in the 100. Tarasevich swam a good in-season time of 47.87 to rank him fifth in the country this season. Finishing second was Sean Lehane of Tennessee in 48.59.

Molly Hannis of Tennessee rocked the 100 breaststroke with a wicked 1:00.31 to beat her previous season best of 1:00.84 and rank her second overall in the nation behind Rachel Nicol. Hannis’ breaststroke talents gave her a huge lead over second place finisher Annie Lazor from Auburn who touched in behind Hannis in 1:02.08.

Another Tennessee swimmer took the men’s 100 breaststroke final with the likes of Peter Stevens. Stevens swam a 54.22 to narrowly win the event of Louisville’s Thomas Dahlia who touched in at 54.25 to make it a very close race. Michael Duderstadt of Auburn rounded out the top three with a 54.48 performance.

Tanja Kylliainen of Louisville threw down a fast 200 fly to take the win in the evet with a 1:56.70. Behind her was Alex Merritt of Auburn who was over two full seconds behind in 1:59.17.

Sam McHugh of Tennessee won the men’s 200 fly in a time of 1:45.82 to put a sizable gap between himself and second place finisher Alexander Hancock. Hancock, swimming out of Auburn, touched the wall in 1:48.30 for the second place finish

Following the 200 fly was the 50 freestyle splash-and-dash and Tennessee relay anchor Faith Johnson took the top spot in 22.73. That time narrowly beat Kelsi Worrell of Louisville who threw down a 22.80 to finish second. Third behind the two sprinters was Allyx Purcell of Auburn in 22.89.

Louisville’s medley relay anchor who had the fastest freestyle split of the night, Caryl Blondell, demonstrated his raw speed once again with a 20.23 in the 50 freestyle to claim cold. That time took down Kyle Darmody of Auburn who swam a 20.25 and Troy Tillman of Tennessee who put up a 20.39 for third.

After the 50 freestyle the swimmers took a break and made way for the divers as Sam Lera of Tennessee was able to grab 289.80 points to win the women’s 1 meter event.

Swimming commenced again soon after and kicked off with the 100 freestyle. The three swimmers who finished top three in the 50 freestyle went neck-and-neck again, but this time it was Kelsi Worrell of Louisville who took the top spot with a 49.15. Second was Faith Johnson in 49.52 over half a second ahead of Allyx Purcell who touched in at 50.24 for bronze.

Caryl Blondell of Louisville was able to take the sprint crown as he backed up his 50 freestyle win with a time of 43.85 to win the 100. His teammate Rudy Edelen was second with a time of 44.93 leaving Kyle Darmody with the bronze in 45.21.

Right after winning the 200 fly Tanja Kylliainen was back in action and was able to grab another win, this time in the 200 bacsktroke. Kylliainen swam a 1:56.95 to take down two Tennessee swimmers with the likes of Madison Hahn and Amanda Carner en route to gold.

In the men’s 200 backstroke it was all Tarasevich who was absolutely on fire, rocking a nation-leading time with a wicked 1:43.77. Joe Patching was just behind him in 1:44.02 to also post a very fast in-season swim.

The 200 breaststroke was up next and once again featured a big win by Tennessee’s Molly Hannis. Hannis stepped up and threw down a 2:10.28 to move her up to third in the nation this season and better her season best of 2:11.21 from early October. Annie Lazor once again settled for second behind Hannis with a time of 2:13.36.

Thomas Dahlia who finished second in the 100 breaststroke earlier in the meet was able to come home with a win in the 200 clocking in at 1:58.63 for the win. Dahlia was just slightly ahead of Auburn’s Michael Duderstadt who finished second behind him in 1:58.72.

The meet took a swing back to distance freestyle and featured another win by AShley Neidigh as she swam a 4:48.22 to comfortably win the 500 freestyle. Once again, just like in the 1000 free, Zoe Thatcher finished second with a time of 4:51.52 to make it a 1-2 finish for Auburn.

Sam McHugh also had his second win of the night, getting a win in the 500 freestyle to go with his 200 fly win from earlier. McHugh put up a 4:26.73 for gold ahead of teammate DAvid Heron who swam a 4:28.38 to grab the silver making it his second second-place finish of the night.

Kelsi Worrell grabbed a 100 fly victory to go with her 100 freestyle victory sporting a 52.99 to take gold. Megan Fonteno of Auburn finished second behind her in 54.14.

Josh Quallen of Louisville swam a terrific 47.89 to claim gold in the men’s 100 fly ahead of Aubrun’s Alex Hancock who touched in at 47.92 just behind Quallen to take the silver.

In the last individual women’s event of the night Tanja Kylliainen became the only swimmer of the meet to come home with three wins after she touched first in the 200 IM with a time of 1:59.46. Finishing second was Molly Hannis who also had two wins going into the event, but ended up settling for second behind Kyllainen with a time of 2:02.19.

Joe Patching of Auburn who won the 200 freestyle swooped in for a win in the final event of the night with a 1:46.60 in the 200 IM to beat Louisville’s Nolan Tesone to the wall. Tesone touched in at 1:47.47 lass then a second behind Patching.

Following the completion of the individual events the only remaining events were the men’s and women’s 200 freestyle relays. The Tennessee women made it two for two in the relays with another win, clocking in at 1:30.02 to finish first. Auburn was second in 1:30.86 ahead of the Tennessee B team who snagged a third place finish with a time of 1:33.85. Faith Johnson of Tennessee had the fastest split of the night with a 21.75 on the anchor leg of Tennesee’s A team.

The Louisville men were also able to make it two for two as they came home with a win over Auburn touching in at 1:19.90 to Auburn’s 1:20.02. The slight win came with much help from Caryle Blondell who swam a 19.54 split to anchor the Louisville relay and secure the win.

What has happened to the Auburn men over the past few years? It seems as though the program is not excelling at the level it did during the championship seasons – in terms of coaching, training, meet performance, and mostly, recruiting. Has the program lost its intensity, or am I just making things up?

And the year they won, it was Marsh’s recruited swimmers and the suits! They had a jump on those suits before others knew about it.
But pretty much the women have fallen off the face of the ncaa meet and the men are just on a slower decline. They are counting on their post grads/foreign kids for their success and not getting the recruits that Marsh could get. I don’t think they have anyone on the USA National Team anymore. …..compared to CAL or a UGA.

The women’s team is currently undefeated and swimming well against top competitors. Wouldn’t count them out for a strong showing at NCAA’s.

They were 13th at NCAA’s last year I think or around there. Have they beaten any top 10 teams yet?

WAY TO GO TENNESSEE LADY VOLS!!!!!!!!!!!
Even though Auburn is undefeated, Auburn didn’t beat the lady vols, they TIED.
But honestly, the lady vols won that meet with their heart.
Absolutely INCREDIBLE.

Anybody know how much Peter John Stevens jumped the gun by? 23-mid is absolutely filthy.

-0.07 Absolutely absurd athleticism off the blocks. He practically touched the flags with his head in the air. Monster jump!