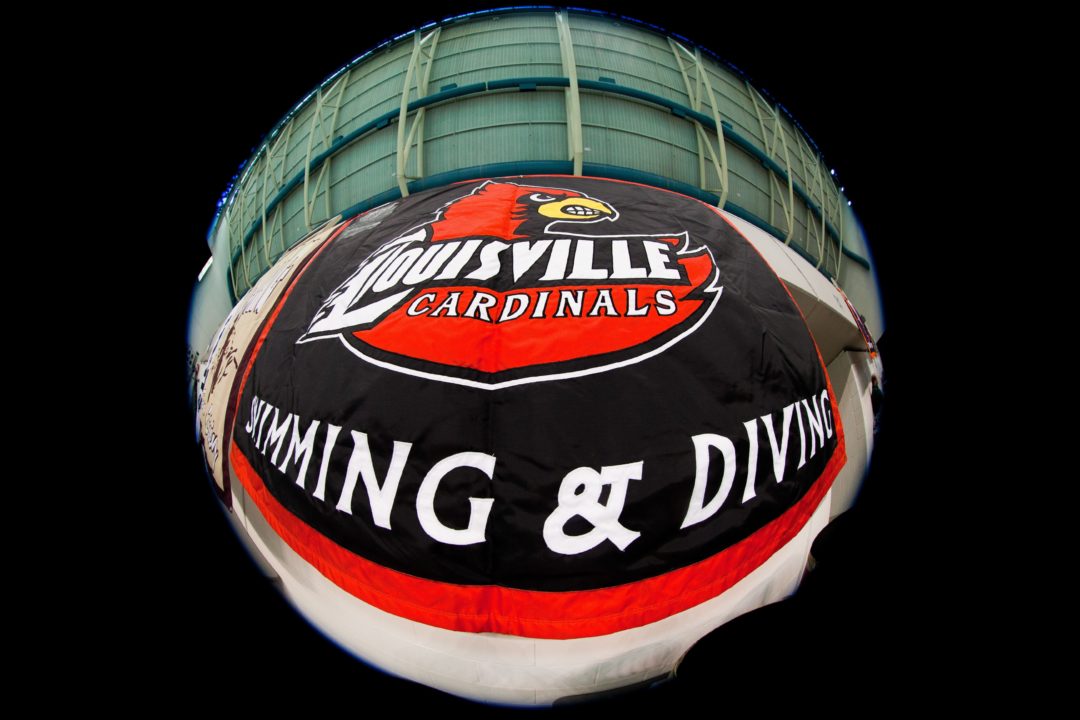 The Louisville Cardinals will bring one of the healthiest athletics programs in the country to the ACC in two years. (Photo Courtesy: ©Tim Binning/TheSwimPictures.com)

You didn’t think the colleges were all settled in their conferences yet, did you? The Big East’s last major football player, the Louisville Cardinals, has bolted and will join the ACC in 2014-2015 just as Maryland is exiting, ESPN is reporting this morning.

The initial reactions of most observers, both within and outside of the swimming community, is a positive one. In recent years, Louisville football has dwarfed that of Maryland, and even Louisville basketball has far outshone the historically-strong Terrapins. Through support of a burgeoning local business community, including fast food brands Yum! and Papa John’s, Louisville has upgraded all of their facilities, and most importantly is filling them: they averaged 6,000 more spectators at each football game in the 2011 season than Maryland did, and returns this year indicate an even more significant margin. That is despite Maryland welcoming in a much more name-recognizable slate of opponents.

In swimming, the advantage is overwhelming. Louisville is the quickest-rising program in the country, bar-none, and Arthur Albiero is turning out All-Americans and NCAA Champions. Maryland, on the other hand, decided to cut their program following last season (though they claim with their move to the Big Ten that they’re going to work on reinstating slashed programs). Louisville brings to the conference the Ralph R. Wright Natatorium, which is every-bit to the level of the pool they lost in Maryland. The city is also in the running to host the 2016 Olympic Trials, which shows their support for the sport.

The ACC already seems to be undergoing a bit of a power shift in swimming. Whereas the North Carolina Tar Heels and the Virginia Cavaliers have been used to dominating the conference , the rise of programs at Virginia Tech, Florida State, North Carolina State, and even Duke is balancing out that power significantly. That includes the Virginia Tech men picking off UNC for 2nd at ACC’s last year, though North Carolina was still the highest-placing squad at nationals. The Cardinals men’s squad would have been the highest-placing ACC team at last year’s NCAA Championship meet (though they still would have been challenged by Virginia’s depth at the conference level), which should further increase parity in the league.

A pair of former Big East opponents, Pitt and Notre Dame, will also come to the ACC next year (as will Syracuse, though they’ve recently cut swimming as well). This leaves the league with a 14-team football conference, and equally as many swimming programs.

Maybe most importantly for the ACC, Louisville runs one of the best Athletics Departments in the country. Last year, despite receiving only $3.2 million from the Big East’s media rights deal (that should increase 5-fold in their new conference), they had a bigger athletics budget than any school in the ACC. They turn out great fan support across the sporting spectrum, and have championship success from lower-profile sports like swimming and men’s soccer all the way up the ladder to baseball, basketball, and football.

That’s a match made-in-heaven for a conference known to extend the passion far beyond the typical television sports. The ACC is only rivaled by the Big Ten in terms of the number of members that support swimming, even after the loss of Clemson.

The Big East exit plan is $10 million plus 27 months wait, but most anticipate that negotiations will see a higher buyout and a shorter wait. That is a bargain relative to what we saw Maryland pay to leave the ACC. Connecticut now is the top-dog in the remnants of the Big East, (which has now lost 6 teams), though many expect them to seek alternate accommodations as well. The ACC seems content with 14 football teams, though, so there will still question about where a home for UConn would be, unless someone else leaves the conference.

Below is what the ACC will look like in the 2014-2015 season, with the number in parenthesis indicating last year’s NCAA finish.

The official standings from the 2011-2012 ACC Championships are below.

This is FANTASTIC news for ACC Swimming and Diving! We lost two consistent middle of the pack programs in MD and Clemson (though those last few years of Clemson’s existence they really poured it on and could have become a top-5 team). We have replaced our lost programs with Pitt (nice facility), ND (perennial contender at the top of the Big East) and now Louisville!!

I respect UVA’s dominance in the ACC the last decade, but I am looking forward to those conference championships now more than ever!

ACC’s will be on heck of a big time meet.

This is a very good move for both Louisville and the ACC in general and specifically for swimming. It should only enhance Louisville’s ability to recruit and will, as you point out, improve the overall quality of swimming in the ACC (and more generally other sports). The “loss” of Maryland, which was really addition by subtraction in my view, is more than compensate for the addition of Louisville.