Louise Hansson To Pursue Master’s, Train At Loughborough In The Fall 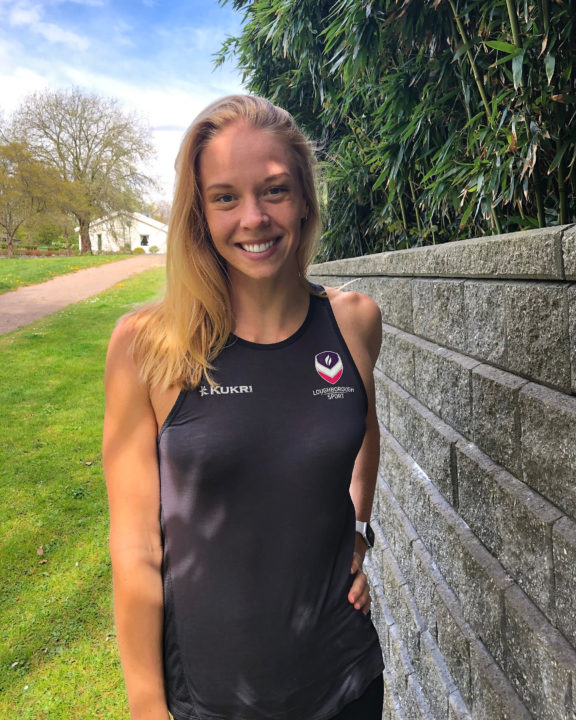 Hansson, a three-time NCAA champion, will move to Loughborough to train for two years while pursuing her Master's Degree in International Business. Current photo via Andi Manley

Swedish Olympian and three-time NCAA champion Louise Hansson will be joining Loughborough University in the fall after closing off her collegiate career at the University of Southern California last month.

Hansson, 23, will be pursuing her Master’s Degree in International Business while training with the university team and competing with them at meets, including BUCS.

“They came to USC, and I was studying on campus and I saw a flyer, and I was like ‘Oh, I don’t think I’m going to study next year, but I’m just going to go to this information session’,” she said in an interview with Coleman Hodges on the Swimming From Home Talk Show. “And then I was like ‘Wow, this sounds awesome.’ And then I just got in contact with the coaches, and then everything just felt right.

“As I wrap up my four years at University of Southern California, I’m so excited to start a new chapter and move to England. I have loved being able to combine academics and athletics, so I am super grateful to have the opportunity to continue my studies as well as compete at a high level at Loughborough University”.

This news comes just days after the announcement that four-time NCAA champion Andreas Vazaios would also be moving to Loughborough to pursue a Master’s.

Hansson, a Helsingborg native, will be studying part-time, meaning she’ll be in Loughborough for two years for the one-year program.

“I’m just happy to be able to do a Master’s,” she said. “It’s not possible in the U.S. (to swim collegiately while doing a graduate degree), and in Sweden, there’s really no schools where you can combine sport and school on any level after high school.”

“We are delighted to welcome Louise into the programme this September,” said Hulme, the head coach. “She is an established international competitor and has excelled as a student-athlete at the University of Southern California under coach Dave Salo. Louise possesses all the attributes one would expect from a world class athlete and I have no doubt she will continue to flourish in our vibrant senior environment; an environment which fits perfectly with her very high academic and sporting aspirations. She joins a competitive group of current International swimmers and we are extremely excited to share the next part of her swimming journey with her.”

As a professional, she’ll still be able to compete in the International Swimming League (ISL), where she’s signed on with the Toronto Titans.

Hansson, who was the two-time defending NCAA champion in the women’s 100 fly before the meet was cancelled, had initially planned to stay at USC in Los Angeles until after the Olympics before heading to England. However, due to the pandemic, she opted to head back home to Sweden, which hasn’t gone completely on lockdown like other countries.

She’s been able to “swim and lift and every day” with a group of five others that came over from the U.S., including sister Sophie, who’s two years into her NCAA career at NC State.

Despite the abrupt end to an illustrious career at USC, Hansson finishes as a 19-time All-American (picking up seven honors this season due to the new criteria), while also having won three NCAA titles and remains the joint NCAA and U.S. Open Record holder in the 100 fly.

Is it possible to make a current team list of the ISL teams? I can’t keep up.

Can someone explain BUCS? Like what are the eligibility requirements to compete?

It’s pretty relaxed – nothing like the NCAA. You basically have to be enrolled at a British university and that’s it. There was a point somewhere around 2007/8 where Bath did quite well recruiting overseas athletes to challenge Loughborough for the first time in a while, but generally British universities don’t seem to have actively recruited international swimmers. I don’t think there’s a maximum number of years of eligibility from what I can remember – you just have to be on a recognised course which involves a minimum number of credits per year.

LA for Loughborough is a helluva change of scenery.

Doesn’t anyone know who she is training under – Mel Marshall, Ian Hulme or Dave Hemmings? Probably won’t make much difference as they’re all decent coaches.

She’ll be in Ian’s group as a member of the university team. Mel coaches the National Training Center group.

Marie Wattel’s in that group so they could probably push each other on which would be good for Louise.