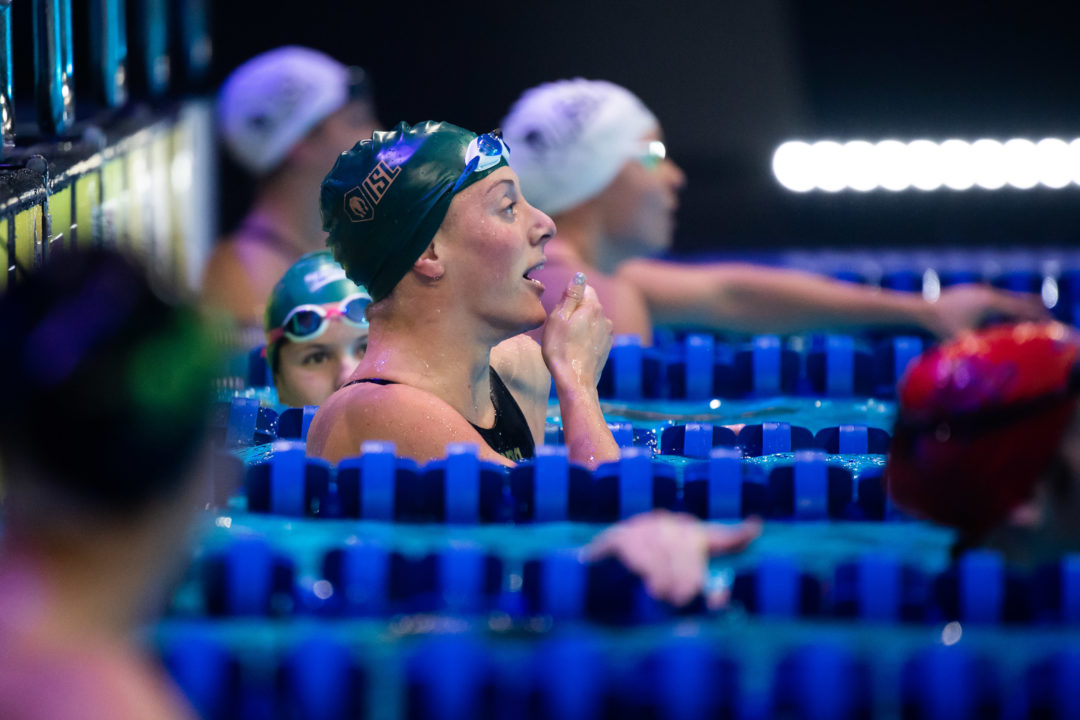 Your eyes were not playing tricks on you, as London Roar did make some 11th-hour race changes from what appeared on the start lists. Archive photo via Mike Lewis/Ola Vista Photography

If you were able to scan our post regarding start lists for today, day 1 of the International Swimming League (ISL) final, then you know there were some notable 11th-hour changes between what was planned and what actually happened with some London Roar swims.

A shuffling of events primarily among Guilherme Guido, Duncan Scott and Kira Toussaint left some wondering if these last-minute changes were a result of strategic energy-saving tactics or simply an attempt to psych out the competition by keeping them in the dark and unable to react in time.

Whatever the reason, on the whole, the changes didn’t appear to render the desired results, as Roar currently sits 3rd among the 4 teams, holding just a 22.5-point advantage over last place LA Current. Having lost both medley relays, getting skins selection is now out-of-play, which puts the squad at the mercy of what CAC and ENS decide.

With that in mind, let’s break down the start-list-to-swim alterations and their subsequent impact for London Roar.

Despite appearing on the start lists in the 50m back, Dutch national record holder and newly-minted World Record holder in the event, Kira Toussaint, was nowhere to be found when the starting gun went off. With Roar trailing both ENS and CAC, the thought was that Toussaint was being saved for an all-in swim come the medley relay after already having swum the 200m back earlier in the session.

Instead, London Roar went with Kathleen Dawson to join Mariia Kameneva for the 50m back, with the pair finishing in 8th and 7th place, respectively. Together they reaped 3.0 points, which is a far cry from the 10 points Toussaint collected last week alone with her semifinal win, while Kameneva earned 4 points in that same race for 14 total.

Adding salt to the wound today is the fact that Toussaint wasn’t the fastest opening leg on the medley relay. Although she hit a solid leadoff of 56.16, she was smoked by Cali Condors’ Olivia Smoliga, who fired off a monster 55.60 to set the stage for an ultimate CAC victory in the event. With that win, CAC gets to deal a potentially fatal competitive blow of selecting the skins discipline for tomorrow.

In nearly the opposite of what happened with Toussaint, Guilherme Guido wound up lining up behind the blocks for the 50m back when his name was missing from the start lists. According to what was provided prior to the meet start, London Roar had entered Luke Greenbank and Christian Diener.

Surprise! Guido hopped in to put his feet on the ledge for the 50m back after all. However, the Brazilian’s usual finesse fell short, with the Roar member producing just a time of 23.02 to tie ENS’ Evgeny Rylov for 3rd place. Guido snagged 5.5 points in the process, which is off his massive 12 points from semifinal #1 or even his 7 points from the match prior to that.

Diener remained as Guido’s partner in crime, with the German hitting 23.35 for 4 points in the race.

Versatile Duncan Scott can essentially swim anything, but in an ISL final where jackpots are a looming game-changing threat, London Roar needed to buckle down and use their Scottish star wisely.

In this vein, although he was originally listed as the 50m freestyle participant for Roar along with Mikhail Vekovishchev, Scott was a no-show for the splash n’ dash. Instead, it was 200m backstroke point-earner Greenbank who tried to hang with the thoroughbred racers in the 50m free.

Both Vekovishchev and Greenbank fell to the bottom of the pack with the former placing 6th, earning zero points, while Greenbank placed 8th and was jacked for his far-behind 22.58 lane-filler swim.

For comparison, semifinal-only swimmer Katsumi Nakamura snagged 5 points for Roar last week while Vekovishchev reaped 4 points, so the Roar’s -1 result here was well behind the 9 from the SF.

Taking on the 200m IM as his only individual event on the day, then, Scott replaced start-listed Vini Lanza in the actual race. Scott wound up placing 3rd in a time of 1:51.96, just off his big-time British record-setting swim of 1:51.66 from last week. Even that kind of performance wouldn’t have put a stop to what LAC’s Andrew Seliskar was throwing down tonight, with the former Cal Bear crashing the party with a 1:51.53 ISL-leading effort.

Scott’s teammate Andreas Vazaios was next in line, getting the runner-up slot with 7 points to add to Scott’s 6 to render Roar with 13 in total.

Going back to Scott’s 50m free disappearance, the 23-year-old has shown us time and time again he can handle a multi-event, rapid-fire lineup, a la his famous BUCS double-digit racing routines. Plus, the man has a lifetime best of 21.25 in the 50m free. However, even if he was at that PB today in Budapest, he would have brought home zero points against the biggest guns the ISL has to offer in this event, so, in this case against the likes of Manaudou and Dressel, leaving him out made sense.

Even after the analysis, the question for fans and competing teams is how these last-minute London Roar changeups are perceived – as strategic gameplay or teetering toward crossing the good sportsmanship line.

Trying to be fancy, tactics don’t work with start lists in swimming, everyone knows what everyone has.
Luke greenbank in 50free is a little bit off an insult. Anyone who knows him will know he’s been a smaller build, who has a history of 200bk/200fly and 400IM.
His 1.48.6 200bk was fantastic, feeding him to the lions going 22.5 is a joke. Why not stick Scott Mclay in he’s been 21.3 at least or any of the 4×100 boys.
Poor coaching choices just like the other ‘bizarre’ acts today.

Scott McLay is relay only. Which of the non relay only swimmers would you make relay only to stick McLay in the 50 free to gain no points?

Also all the other 4×100 boys would’ve gained no points as well. The jackpot rule made their swims worthless so there was no point puting them in there.

Fair point, not sure what this did for greenbank though apart from comedy value. I’m sure all others could go faster than 22.5, whether they stop getting jackpotted I don’t know.
But at least, for the interest of seriousness, put someone in who can hold there own.

This was a strategy that most teams picked up on mid-season. Because, essentially, if you don’t have a swimmer who can get within the Jackpot time, it doesn’t so much matter whether that swimmer finishes 4th or 8th. They all score the same: 0 points. So, if you have a swimmer who you can save for a latter event where they might score, no use sticking them in a race to finish 6th and get 0 points. Instead put in a swimmer who is either done, a general “event eater,” or has a longer break until their next swim, and just tell them to do their best to hit the minimum time standard. Or, in some cases, like the men’s… Read more »

Anyone slower than 21.01 would’ve got jackpoted which is everyone Roar has.

I get Roar’s thinking and think it made sense. Initial plan to try and protect swimmers for the Men’s Medley Relay but it became apparent during the session that Energy were just too strong as their swimmers improved on last week as London plateaued. Accepting you’re not likely to win the men’s medley relay then means: – No need to “rest” Scott by stopping him doing the IM instead of the 50 free where every expectation was that he’d be jackpotted – Not resting Guido In hindsight to rest Toussaint looks more questionable. Her improved performance compared to last week allowed them to beat Energy in the women’s medley relay which is critical in terms of preventing Energy getting through… Read more »

Roar would’ve chosen back not breast for skins.

Agree – but I think if they knew Cali would swim that fast and have the skins pick (and therefore choose either breast or back) I don’t think they rest Toussaint. The big risk was Energy getting the skins pick

Toussaint in the in the 200 but not the 50 only makes sense if she wants to get a tapered time in the 200 and the team doesn’t care about points. Even then, baffling not to at least swim a 50m event you just broke the world record.

The others were maybe a star list error (Guido) or seeing how hot Dressel was, accepting the jackpot

It’s the same tactics Energy have used with Kolesnikov throughout season and it’s worked for them but Toussaint was unable to deliver a big time in the relay to make it worthwhile. Guido was likely the same tactical idea but they changed their mind.