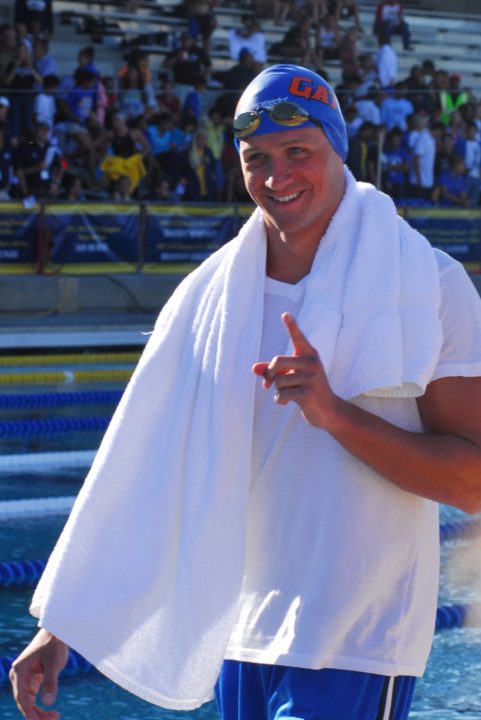 Ryan Lochte won his first Grand Prix race in almost three months, and the American men put on quite a display on night 2 of the 2013 Santa Clara Grand Prix. (Photo: Bill Collins)

Living up to its name as the International Grand Prix, the first night of finals at the 2013 Santa Clara Grand Prix saw every final but two have swimmers from at least three different countries. There were a lot of great times, as the Americans (who are on a different timing than the Canadians and Australians that have already qualified for Worlds) look to be rounding into form about four weeks out.

Megan Romano, after disappointingly missing the Olympic team, began her quest to qualify for the 2013 World Championship team with a 54.19 to win the women’s 100 free.

If you’re ready for a sign: this is almost identical to the time that Romano went at last year’s Longhorn Aquatics Elite Invite, which was a month before the Olympic Trials. This meet is a month before Worlds Trials. Last year, going so fast this close didn’t work out, and she wasn’t able to hold it. The hope for the Americans, with how good she is in relays, is that she’ll be able to hold that time this summer and make at least a top 6 spot for a relay.

That’s the fastest time by an American this year, supplanting Missy Franklin, who was 3rd in this race in 54.56. In between the pair was Natalie Coughlin in 54.33. As Coughlin continues to resurge as a sprint freestyler, that’s actually faster than she’s been since 2011. After swimming a lifetime best earlier this year in the 50, watch that race for a really special swim.

Australian 18-year old Brittany Elmslie was 4th in 54.85. That’s almost identical to the time when she came into town for this meet this year as well.

Olympic champion Nathan Adrian said in early April that his training had been inconsistent. If a 48.08 Meet Record is an “inconsistent” Adrian, he might be able to go with Aussie James Magnussen at Worlds if Magnussen goes for the 47.0 he’s capable of, assuming Adrian is back into his normal routine.

Adrian’s training partner Anthony Ervin pushed this race early, as he’s wont to do, but Adrian wasn’t far behind (22.82 split for Adrian to 22.73 split for Adrian), which is a good sign for him.

Ryan Lochte ended up 2nd in 49.53, which is another season-best for him (after the 100 fly in prelims). Lochte is suited up in a jammer for the first time this season, and the results are showing.

Conor Dwyer matched exactly his lifetime best from prelims, and he was followed by Brazilian Nicolas Oliveira in 49.60.

First an NCAA Championship to close out her senior year at Texas, and now Laura Sogar zooms to the top of the American rankings with a 2:26.53 in the 200 breaststroke.

With Rebecca Soni out for the Americans this year, Sogar has zoomed to the top of a lot of peoples’ lists for a spot at the World Championships in this 200 breaststroke. She gave a little back to the Olympian Micah Lawrence on the last 50 meters, but when you go out so fast, you can afford that.

In what was a bang-bang finish for 2nd-5th, Annie Zhu was 4th in 2:27.42, followed by Canadian Martha McCabe in 2:27.96. That’s a full second faster than she was this same weekend last year.

Kaitlin Freeman from the Santa Barbara Swim Club dropped another second from her prelims time, and Australian Jenna Strauch was 7th in 2:28.51. Strauch is only 17, and is another in a long line of great young Australian breaststrokers (their breaststroke group is like the American women’s breaststroke group.)

Arizona’s Kevin Cordes was satisfied with his year-after-year improvement in the 200 breaststroke after winning in nearly a lifetime best on Friday. (Photo: Bill Collins)

American Kevin Cordes is already right on top of his lifetime best: specifically, his 2:10.95 was just .03 away from his best time swum at last year’s Olympic Trials.

Cordes, who has very long strokes, was out in 1:02.9, giving high hopes for his 100 split later in this meet (it should definitely be better than 1:01.) Cordes typically has big tapers, so his hopes for the World Championships squad in this 200 increase exponentially with already a sub-2:11 swim.

This women’s 400 free final didn’t have any really explosive times, but it did have quite the explosive finish. Gillian Ryan went from 6th to first in the last 50 meters for a win in 4:11.83, folloed by Canadian Alexa Komarnycky from the great distance group at Island Swimming.

Michigan’s Connor Jaeger has been hard to beat in 2013. He continued his roll with a win in the 400 free on Friday night in Santa Clara. (Photo: Bill Collins)

Michigan’s Connor Jaeger just keeps winning. He picked up his second win of the meet with a 3:46.93 in the men’s 400 free, which is his best time by a full second.

He and Conor Dwyer were in a dead-heat at the halfway mark, but Jaeger’s distance abilities paid off on the back-half as he pulled away for a big win.

Jaeger went into the Olympic Trials last year largely untested in the distance events. This year, he should be riding with a lot of confidence, as he’s been hard to beat for the last few months.

Michigan/Club Wolverine swimmers took four of the top six spots in the race; Danish swimmer Anders Nielsen was 4th in 3:51.51, followed by Michael Klueh in 3:52.00 and Tyler Clary in 3:52.93.

In the biggest upset of the night, Canadian 20-year old Katerine Savard upeneded the defending Olympic Champion, and World Record holder, Dana Vollmer, by a margin of 58.83-58.90.

Savard held with Vollmer at the turn, which is bad news for the American who likes to put fields away early on. Coming home, the two were stroke-for-stroke, and being a few lanes apart it took until the scoreboard flashed to determine that Savard was the champion.

Vollmer’s opening split of 27.5 was half-a-second slower than she was last month at the Charlotte Grand Prix.

USC sophomore-to-be Kendyl Stewart placed 3rd in 59.22, and another Canadian Audrey Lacroix was 4th in 59.89.

Greece’s Kristel Vourna, who trains collegiately at Alabama, was 5th in 59.97 and American Felicia Lee took 6th in 59.99.

Jasmine Tosky was also in that A-Final, finishing 7th in 1:00.14. Cal’s Rachel Bootsma won the B-Final in 59.94, followed closely by Australians Seebohm and Elmslie.

Ryan Lochte won his first Grand Prix A-Final since Orlando in mid-February to end the session, taking the men’s 100 fly in 52.29. He cruised through the front-half, but came on strong over the last 20-25 meters to run down the defending American Champion Tyler McGill (52.42).

Tom Shields took 5th in 53.10, and the highest-finishing swimmer with NCAA eligibility remaining was Arizona’s Giles Smith in 53.14.

Maybe Lochte can turn in a 50.9 next month since 51.x swimmers are a dime a dozen these days.

Phelps remains the only person to break 51 since 2011 I believe.

Cordes looks like he has gotten wayyyy bigger in the past couple years.