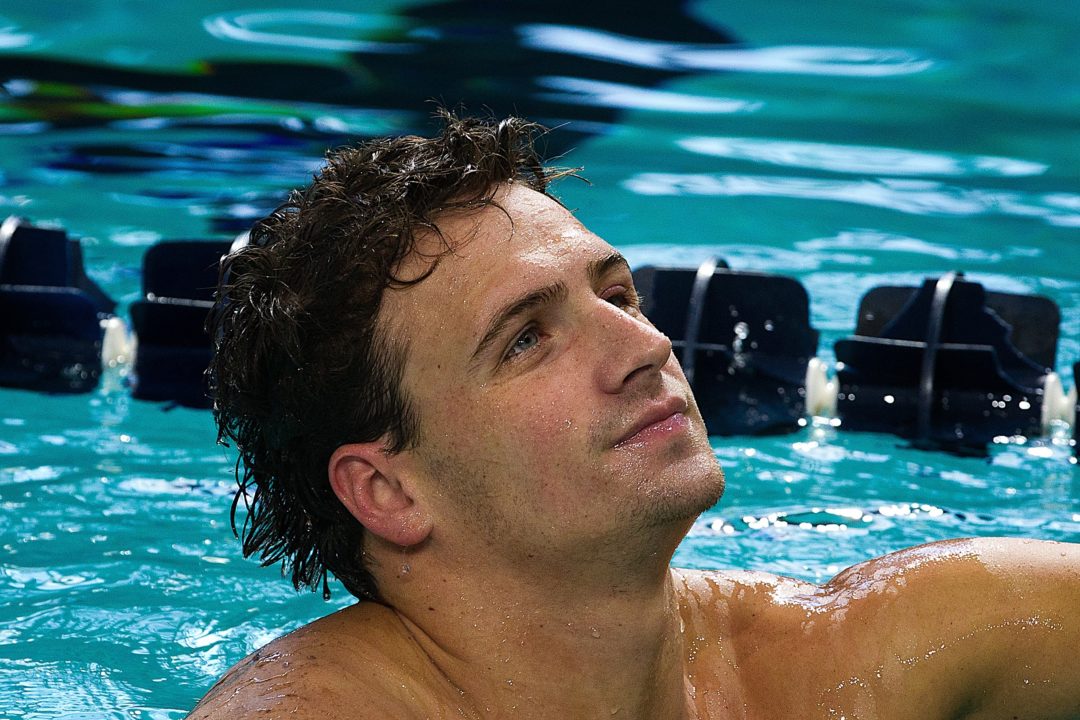 Ryan Lochte has raked in the cash this year, according to Fortune Magazine (Photo Courtesy: ©Tim Binning/TheSwimPictures.com)

10 Things Swimmers Can Be Grateful For From Champion’s Mojo

A list of 10 things that swimmers can be grateful for on Thanksgiving, plus some holiday survival skills from the Champion’s Mojo Podcast.

You can bid to win a Caeleb Dressel-themed sportscar as part of this year’s USA Swimming Foundation Golden Goggles Auction.

According to Fortune Magazine, Ryan Lochte pulled downed 2.3 million dollars in endorsement revenue this past year, and, after some peripheral negative news, Lochte appears to be persevering.

Now there’s an alleged photo of Ryan’s penis being offered to sale to the folks at Deadspin. According to Deadspin:

“The provenance of the photo is less than ideal. It was allegedly taken for a now-ex-girlfriend of Lochte’s. After the Olympics, a friend of the ex began passing the photo along to her friends, and it soon made its way to our source.”

Sounds shaky at best, however, even if it is the real deal (and we are not saying it is), then it is clearly a private photo not intended for the public.  Either way, Deadspin would probably make some enemies if they do, in fact, run it.

Lochte’s taken some hits in the media, and a few have been callous and mean-spirited — attacks on his character, attacks on his own family’s character. Others have been cooler, a by-the-books assessment of his earnings and expected earnings, though they’ve included attempts at base character judgment as well.

According to a marketing expert Bill Briggs of NBC News interviewed, when Lochte admitted to Today correspondent Ryan Seacrest that he sometimes pees in the pool, “many marketers that had been considering the swimmer likely were relieved they had not signed him to an endorsement deal…”

These experts sound fragile, and humorless, particularly after Lochte’s Funny or Die Video Peeing in the Pools, but the context of the quote is in reference to Lochte not cashing in as much as these experts forecasted.

Lochte has seven major sponsorship agreements and more than two million in earnings. After living in the shadow of Michael Phelps, Lochte has proven to be more than successful, and with four more years to compete, it is very likely that Lochte’s endorsement partnerships will grow.

Lochte is different, fun-loving and colorful. Grills and greens high-tops are not for everyone, but millions more love it. A quick glance at Lochte’s Klout  score confirms it.

True, there was a time a when an athlete had to be 100 percent pure and only speak from a stilted script to gain endorsement revenue and the media distribution corporate partners can offer. It’s appears the tide is turning, and corporations may be recognizing that a personality and some color can be a positive virtue.

Missy could be making that and some … could be …

The Deadspin title is KILLING me. One misplaced word can make the whole situation way more entertaining. (Personally, I don’t think the picture coming out would necessarily hurt him. His demographic is different from the mainstream swimfan, I think. And, as sad as some may consider it, these kinds of things aren’t as scandalous as once-upon-a-time.)

Good for him! I don’t find the appeal of his products or his general image but I know he is making it big right now…

He’s a great athlete, so, as long as he keeps his swimming on a high note, he’s gonna milk that cow…

Which one of you didn’t want to put your name in the byline for Ryan Lochte Penis Talk? 😉

lol I was thinking exactly the same thing, Taylor! And honestly I don’t want to know who it was, because I hope for real that this is the LAST time anything like that makes it onto SwimSwam, which up until now I really respected!! Please don’t become the swimming tabloid! And Lochte, he needs to wait til he gets more acting/comedy chops before he talks about peeing in the pool; I think he can get away with it better after they get to know how goofy he is. Some of the kids at the pool where I swim took him seriously and we had to re-educate them about not peeing in the pool! 😉

LOL this implies that coaches at your pool allow swimmers to get out and go to the bathroom? Anyone who is anyone who is anyone that knows anything about swimming knows that serious athletes never leave the pool for #1. Can’t miss the training!

lol I know huh? My coach was a hard-ass too. But I suspect in decades to come the culture will slowly change, now that there are reports with some evidence that urine can mix with chlorine to produce carcinogens. then again, if we get to the point of laser pool-cleaning instead of chlorine, we can go back to peeing again! 😉

Well hey I’m not complaining about discussing Lochte’s goods or anything! We’ve all got the parts, and I’m not a prude. Plus any competitive swimmer who says they DONT pee in the pool is lying.

It just gave me a good laugh to see no one’s name associated with the post. But I enjoyed it.

Was the picture taken just after coming out of the pool?

I coach 14-17 yr old girls. And most, if not all of them “love” Lochte. Now to me the peeing in the pool thing is really no big issue. Whether it’s right or wrong, people do it. Lochte probably shouldn’t say with such candor that he does it, but he’s honest.

My issue is that now there’s a picture going around (per this article) of his penis. With his demographic of fans/followerings being underage teenage girls, that is really the kind of press that media should be admonishing him for. Mom saying he only does one night stands…things like that are terrible for an image this guy who could and should be the future of the sport, at least for… Read more »

Phelps sells tickets and attracts TV and internet audience. That means TV stations want to broadcast swimming and maybe earn some money by selling commercial time. That’s why Phelps can command 100 000 euros to swim at a swim meet in Europe or elsewhere outside USA (I don’t know if he’s payed to do Grand Prix meets in USA, I think not). It was amazing to see how people in Rome, Paris or Berlin were excited to see him swim. That’s making money AND promoting swimming all over the world. Now let’s see Lochte do that, instead of making a fool of himself in Bachelor or something equally stupid.

“that is really the kind of press that media should be admonishing him for.”

I don’t understand. Why? And what business is it of yours or theirs? He’s not selling it himself, and from what’s been written about the attempted sale of the photo is that it’s quite old (so likely before sexting became an issue) and is in the possession of someone he trusted.

Plus, I am very sorry to inform you of this but 14-17 year old girls already know what sex is, penises look like, and most of them are more than likely already intimately involved with penises. Shielding their eyes isn’t doing them or you or anyone any favors. Use it as a teaching tool for… Read more »

“Lochte is different, fun-loving and colorful. ”
As opposed to other swimmers, who are fun-hating and bland, I guess?

Until proven otherwise, I’ll consider this article to be written by Lochte PR team.

I know I shouldn’t even reply to you based on your past posts, but only the most in denial would maintain that Lochte is just like all of the other professional swimmers or – what I think you’re really getting at – that Phelps is just as carefree, colorful and approachable as Lochte is. They aren’t – many of them admit it – and Phelps isn’t. And now Mike’s retired, so you can quit getting so bent out of shape every time Lochte is lauded without Michael’s name being attached along with it.

I believe that 2.3 million figure came from an article that based the estimate on predictions he’d make $500,000 off his fitness video
http://features.blogs.fortune.cnn.com/2012/05/29/chartist-olympics-london-rich-sport/
Sorry I don’t think he’s making $500,000. Some thoses contracts have medal bonuses but he walked away with 2 golds, so I don’t think that’s going to compensate for the $500,000 this article predicted he’d make for his video.

Last year I think an ESPN article said he made in the high 6-figures, so this is probably the first year he made 7 figures and that’s impressive. I just don’t think he made 2.3 million though.